In today’s skeptical culture, Paul’s words to the church in Colossae continue to resound: “See to it that no one takes you captive by philosophy and empty deceit, according to human tradition, according to the elemental spirits of the world, and not according to Christ” (Col. 2:8).

Admittedly, Truth Matters: Confident Faith in a Confusing World is an unassuming book. Though the title pops off the cover, the book itself appears as just another reactionary Christian title railing against popular notions of “relevant truth.” Haven’t we dealt with that problem? Isn’t it time to move on? But with the expertise of two New Testament research professors (Andreas Köstenberger and Darrell Bock) matched with the pastoral pen of a student pastor (Josh Chatraw, who also holds a PhD), this little book is anything but ordinary. It fills the gap of introductory apologetics aimed at high school and college-aged believers as well as anyone confronted with skeptical claims regarding Jesus and the Bible (which likely includes you).

‘We Will Own Your Children’

My seminary philosophy professor once cautioned against complacency regarding current philosophical trends. Upon issuing this warning he paused and, removing his glasses, declared, “We will own your children.” Some might have thought this warning too severe. Others might have believed him a tad dramatic. Yet a current survey of young evangelicals might suggest otherwise. 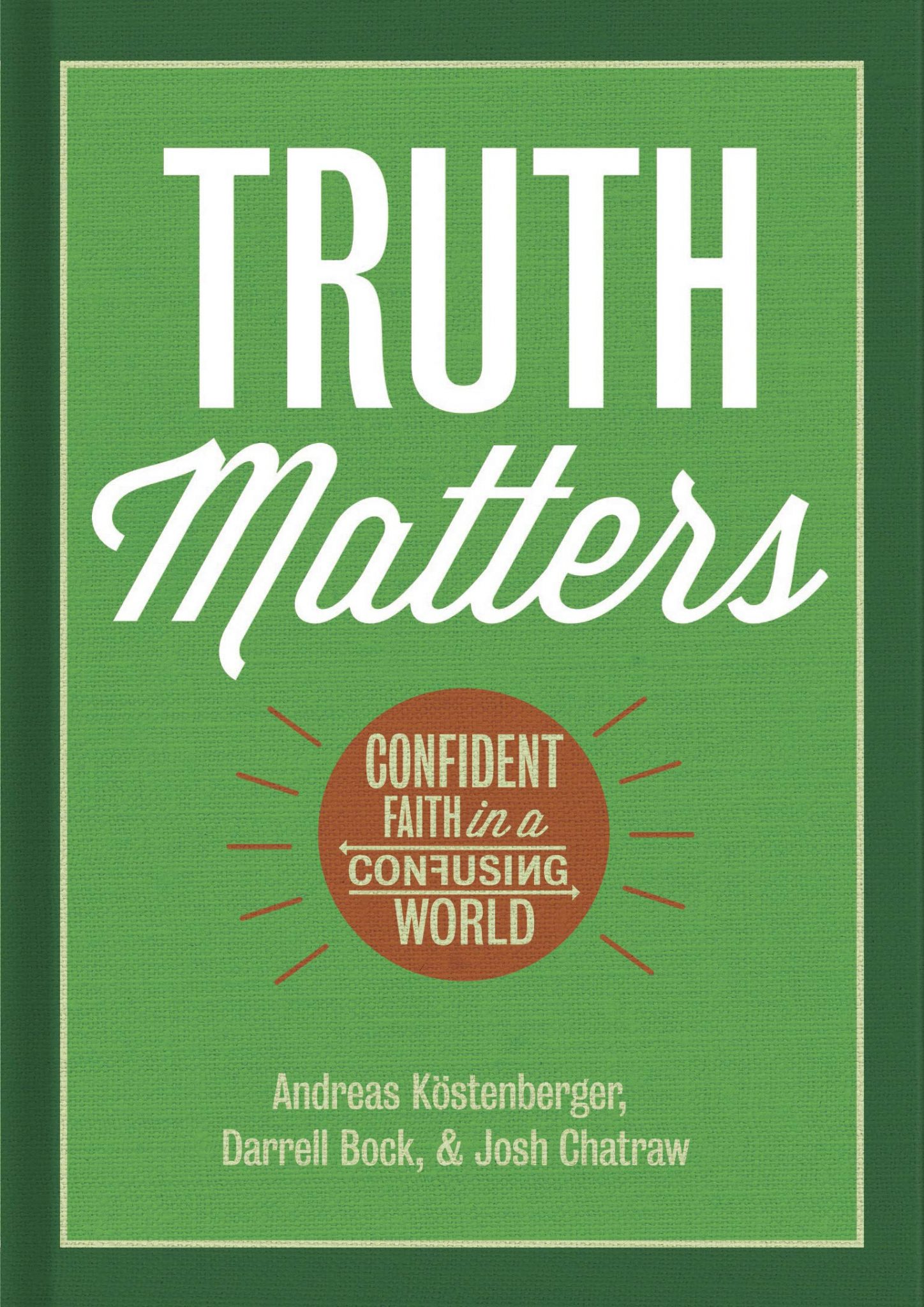 The idea of “multiple Christianities,” the supposed corruption of the biblical text, and alleged forced labels of “orthodoxy” and “heresy” have infiltrated the public university religion classroom. Semester after semester, many professors espouse an account of “conspiracy theory” Christianity wherein ancient bishops jockeyed for political power and crafted Scripture to fit their agenda. These greedy churchmen excluded those who didn’t agree and subdued parishioners to conform to the “orthodox” agenda. Or so the story goes. And it is owning our children.

New Testament scholar and New York Times bestselling author Bart Ehrman is just one of the many champions of this view of Christian history. Popularized through bestsellers like Misquoting Jesus and Jesus, Interrupted, Ehrman has established himself as the mouthpiece for modern skepticism toward traditional Christian claims concerning Jesus and Scripture. While various worthy replies have been written, few have focused on those receiving the brunt force of this skepticism—university students. Though these popular objections have a firm grasp on the intellectual steering wheel of our culture, Truth Matters provides a much-needed map to help students decipher what they see and hear.

Too many popular apologetic works are concerned with simply combating bad information with good information. Truth Matters, however, helps to form categories of thinking and implores us to ask the right questions when approaching these issues.

Topics range from suffering (chapter 2) to canon formation (chapter 3), from supposed contradictions in Scripture (chapter 4) to the basics of textual criticism (chapter 5). The authors helpfully highlight the importance of understanding “legitimate diversity” in the early church (chapter 6). Embracing diversity in the Christian faith doesn’t deny core elements of orthodoxy present from the beginning.

Chatraw gives the book’s basic premise: “None of the popular challenges to the Bible offer a credible defeater to the Christian faith.” The authors help us see that Ehrman and his tribe succeed because they speak the language. They isolate and magnify the doubts of young believers, creating a contrived (and often one-sided) portrayal of Christian history that, on the surface, may seem irrefutable. Teachers relay compelling stories of their own journeys away from faith, perpetuating and confirming an air of disbelief. Finally, they reinforce a false dichotomy of faith against reason, creating an “artificial, scholarly boundary beyond which faith is not strong enough to travel” (14).

Köstenberger, Bock, and Chatraw demonstrate that this language is intentional, speaking to the natural doubts and questions most believers have at one time or another. In turn, they “speak the language” by connecting biblical and theological concepts to the hearts and minds of young believers. More than providing accurate information, Truth Matters invites readers to acquire “an active radar of intellectual investigation” (24).

Truth Matters isn’t afraid to embrace contested issues head on. Is it true that we don’t have original autographs? Of course. Does that mean the Christian faith is in jeopardy? Of course not. Ehrman’s rhetoric of “copies of copies” doesn’t hold water when you consider the stunning amount of manuscripts among which only minor variance occurs. More than 5,000 manuscripts available for examination makes Plato or Cicero look like third-string players in the ancient text game. As the authors of Truth Matters note, “The Bible is by far the best-attested book of ancient origin” (112, emphasis original). Young believers, take heart: the gospel remains entirely unchallenged in spite of slight manuscript differences.

I appreciate the authors’ reference to the “rule of faith” as a “theological standard that unified a geographically diverse group of post-New Testament churches” (142). This “rule” included a basic Trinitarian understanding and in essence mirrored much of what we see in the Apostles’ Creed. This concept is crucial in helping believers understand an early Christian awareness of the faith “once for all delivered to the saints” (Jude 1:3). I think it would have been helpful, however, to mention not just the objective standard represented by “the rule of faith” but the use of the rule in early church writings as a hermeneutical fence against false biblical interpretation. Ehrman and his tribe read Scripture incorrectly and unChristianly because they read it outside the rule of faith. Young believers need to know that the church from the beginning had a clear notion of a right way and a wrong way to read Scripture. Reading Scripture by the rule is just as important today as it was for early Christian interpreters, for so much of what passes as exegesis in secular universities (and Christian ones, too) is wrong and leads believers into dangerous, faith-depriving territory.

Truth Matters gives young readers an eye (and ear) for bad arguments. Köstenberger, Bock, and Chatraw desire to form young minds to think Christianly. Some, however, may be left wanting more. The authors have obliged such readers with the forthcoming Truth in a Culture of Doubt: Engaging Skeptical Challenges to the Bible (forthcoming, September 2014).

Youth pastors, buy copies for your high school juniors and seniors. Walk them through the life-giving and mind-strengthening chapters. Help them explore their doubts with biblically rich answers. Help them to see that the faith is reasonable and can withstand the claims of modern skeptics. Don’t let a single student graduate without having gone through this book with you. To all other pastors: keep a supply of Truth Matters on your shelf to hand to new believers and struggling believers. Use this book to walk the fainthearted through God’s Word to show that this truth can be trusted. Let it be an opportunity for discipleship and pastoral counseling. May it be true for this next generation that they would not be owned by human tradition and empty deceit, but by the Word of God.

Coleman M. Ford serves as director of professional doctoral studies and assistant professor of Christian formation at Southwestern Baptist Theological Seminary in Fort Worth, Texas. His research interests lie within the spirituality and pastoral theology of Augustine of Hippo, Christianity in late antiquity, and the history of Christian spirituality. He is married to Alexandria and they have two children. They are members at The Village Church in Denton, Texas.