The central challenge to the church’s witness and effectiveness in the 21st century is the generosity of its members. So says James C. Petty in Act of Grace: The Power of Generosity to Change Your Life, the Church, and the World. Through the book, he puts forth a significant effort to get God’s money out of the wallets and bank accounts of Christians, particularly American Christians, and into faithful kingdom service. It shouldn’t be controversial for us to recognize that, as Petty asserts, a Christian should live to give.

But how much can writing a check solve? 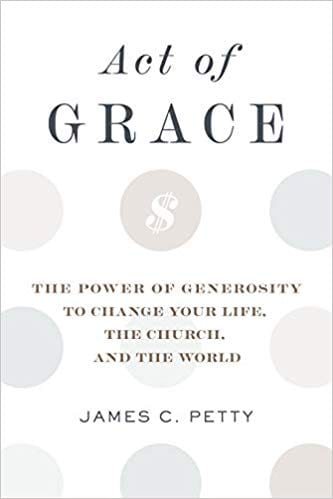 Act of Grace: The Power of Generosity to Change Your Life, the Church, and the World

Act of Grace: The Power of Generosity to Change Your Life, the Church, and the World

A minority of Christians give 10 percent or more of their income to churches and missions, supporting the bulk of church work done today. If more people give, the possibilities will be breathtakingbut first we must change the way we think. Jim Petty wants to revolutionize your view along scriptural lines. Our money is for giving; it is an exciting, tangible means for showing love and mercy to others. Petty traces this perspective through the stories of Old Testament saints, our Lord Jesus, and the early church. He also evaluates Christian giving throughout history, showing how and why it has fluctuated over time. Although talking about money feels taboo to many of us, God doesn’t have the same reservations, and Petty shows how we can responsibly plan our own finances.

Petty, emeritus director of the Children’s Jubilee Fund, gives us ample background on that question, presenting a biblical vision of generosity through an impressive biblical survey culminating in a summarized theology of money. In the second half of the book, he turns to history and practicality, tracing the church’s teaching and giving habits from the patristic era to the present—with special focus on the decline in giving in post-World War II America—and offers suggestions for churches and individuals to both teach and model generosity.

Petty’s biblical exposition is thorough, exploring the intricate ways God provides for his people through his people. From the Old Testament, he includes segments on creation (“a massive project of pure giving,” 33), Abraham (“that we too are ‘blessed to be a blessing’ is the essential thesis of this book,” 46), the exodus (as the Israelites learn about God’s provision through manna), the Law (where interest-free loans, gleaning, and the jubilee protect “the poor from a spiraling mountain of debt,” 67), the Davidic kingdom, and the prophets (in which Israel is judged for failure to live in godly generosity). From the Gospels and Acts, Petty shows us Jesus as the ultimate jubilee (94), and the radical generosity in the New Testament church as the fulfillment of Old Testament economic laws. From the epistles, he expounds this thesis as a model for us in the church today.

In the face of the biblical case for radical generosity, all of us are without excuse for lackluster giving.

Throughout, Petty reinforces the well-worn idea of wealth as stewardship—that whatever God provides for us beyond what we need is held in trust for serving others. He projects, with solid mathematical analysis, the potential funding unleashed if American church members would simply increase their giving to a true tithe (10 percent of income), desiring to set churches and ministries free to dream bigger for the kingdom instead of limping along on crumbs. He also offers strong denunciations of “shamanistic” prosperity teaching, even as he connects lack of generosity and care for the poor with “the spiritual weakness of our suburban churches” (176) and pushes back on wealthy givers’ tendency to filter the “deserving” from “undeserving” poor.

In the face of the biblical case for radical generosity, all of us are without excuse for lackluster giving.

Petty is at his strongest in Scripture exposition and historical survey. In his applications, though, he becomes less reflective and less bold in challenging the cultural mainstream. He focuses significantly on access to quality Christian education as the modern “jubilee” (reflecting his commitments to Christian education in Philadelphia through the Children’s Jubilee Fund)—which is an admirable, but narrow, vision.

This statement is emblematic of my frustrations with the book: “If funds were provided [for scholarships to Christian schools], this dynamic could substantially heal our inner cities and disciple a generation to Christ” (19). Petty consistently locates his calls to action in the personal habits of individuals and seems less interested in addressing the overall social systems that contribute both to poverty and to the lack of generosity he targets. He connects freedom of markets to jubilee as well (41)—with little definition of what makes them truly free. He emphasizes that middle- and upper-class Christians should “remember the poor” (Gal. 2:10) without questioning why we are so far removed from them that we can forget.

Though he lays the foundation in his biblical exposition for this sort of engagement with social systems, Petty’s solutions put too much emphasis on generosity as an end rather than a means to transformation. Such individualism drives other applications that fall short of his transformative vision. He only lightly engages with how Christians can give generously of things beyond money—time, social and reputational capital, relationship—and gives scant attention to the ways we give (to avoid disempowering others) or to how we even determine which causes and ministries to support.

Petty’s well-intentioned suggestions (which include encouraging people to rent, rather than buy, luxuries they want) never fully challenge our attachment to comfortable Western lifestyles. His passing recommendation of Dave Ramsey’s Financial Peace University (which emphasizes wealth-building far more than generosity) as a prime tool to equip churches for financial management rings hollow in light of all Petty has unpacked for us of God’s vision for our money.

Petty makes several sweeping generalizations unsupported by his cited sources. He writes, “Judeo-Christian belief in a God who is both good and infinite is unique—unknown in other cultures. This is reflected by the lack of charitable giving that is inherent in secular, pagan, and pantheistic cultures” (42). This conflates Christian belief with “culture” (presumably Western), and collapses the varying political, social, systems of the world (many of which have quite different views of “property” and “giving”) into belief categories. He lists “male immaturity” and “‘useless’ college majors” as key contributors (alongside student debt and massive macroeconomic shifts) to a lack of wealth and generosity in the millennial generation.

Some statements could be taken as dismissive of the experiences of people struggling with poverty—particularly people of color. Petty often seems to equate African American churches with poor churches, and conflates “suburban” with wealth and “urban” with poverty. Even his acknowledgment of the twin evils of native people’s displacement and chattel slavery (69, 218) feels flippant, a patronizing handwave toward centuries of oppression that covers just a couple of sentences. Moreover, he deploys two examples of Confederate soldiers—including Robert E. Lee (97)!—as illustrations of the complications of divided loyalties between God and money (Matt. 6:24). These leave a very bad taste, adding no substance to his larger points and undermining the force of his argument.

Many may find sections of Act of Grace helpful, and a pastor wishing to spark generous giving could do worse than to preach a sermon series from the biblical passages Petty expounds. Surely some of my critiques concern limitations or oversights rather than omissions—no one book can say all that has to be said about a subject, and most are more effective when they focus on one thing. Petty’s aim at loosening American Christians’ grip on their money is steadfast on every page. Still, I can’t help thinking that it could’ve been shorter, bolder, and more empathetic if Petty had followed his biblical spadework to simpler (if more countercultural) conclusions.

Justin Lonas is director of core content deployment for the Chalmers Center at Covenant College and an MDiv student at Reformed Theological Seminary (Atlanta). He is a member of East Ridge Presbyterian Church (PCA) in Chattanooga, Tennessee.