I’ve spent my career trying to understand how my faith should influence the way I do economics. How does believing that Christ was crucified, died, has risen, and will return change how I think about resource scarcity and incentives generally, or financial crises and monetary policy specifically? The answer is not clear even after many years.

I read Religion and the Rise of Capitalism by Benjamin Friedman hoping for insight. Friedman, a political economist, argues that 18th-century theological debates made Adam Smith think in a certain way and made the public receptive to his ideas, which led to the development of modern economics (24).

Smith’s big idea was that in the context of competitive markets, the pursuit of self-interest not only could but would lead to benefits for everybody else—and the world found his idea revolutionary. Friedman argues that Smith’s insight and the public reception were possible because of society’s move away from “predestinarian orthodox Calvinism” (5, 168). As a mainstream economist with Reformed theological convictions, this struck me as a provocative claim. If Friedman were right, then what might my theological convictions imply for how I should do economics? 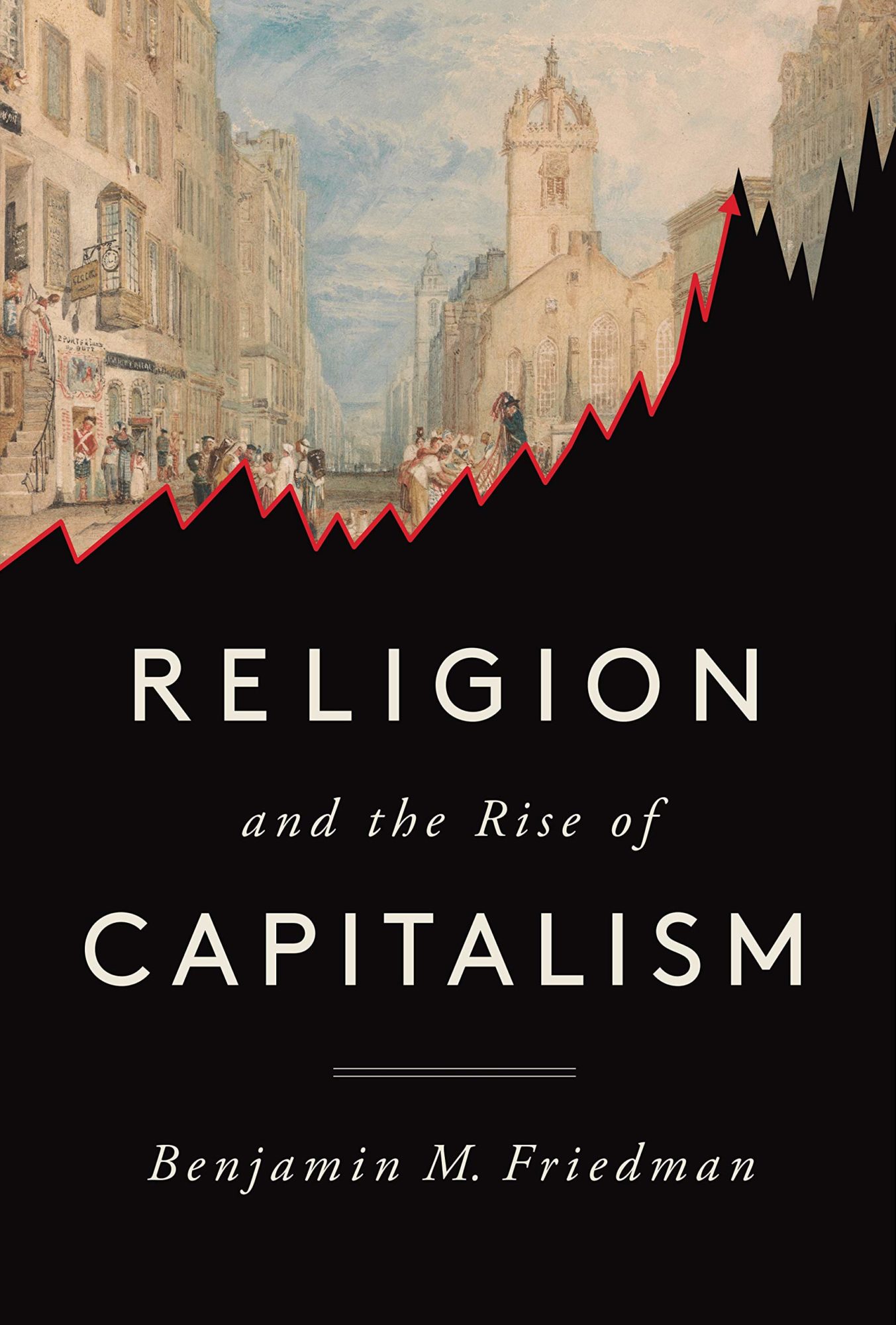 Religion and the Rise of Capitalism

Religion and the Rise of Capitalism

Critics of contemporary economics complain that belief in free markets—among economists as well as many ordinary citizens—is a form of religion. And, it turns out, that in a deeper, more historically grounded sense there is something to that idea.

Contrary to the conventional historical view of economics as an entirely secular project of the Enlightenment, Benjamin M. Friedman demonstrates that religion exerted a powerful influence from the outset. Friedman makes clear how the foundational transition in thinking about what we now call economics, beginning in the 18th century, was decisively shaped by the hotly contended lines of religious thought within the English-speaking Protestant world. Beliefs about God-given human character, about the afterlife, and about the purpose of our existence were all under scrutiny in the world in which Adam Smith and his contemporaries lived.

Friedman explores how those debates go far in explaining the puzzling behavior of so many of our fellow citizens whose views about economic policies—and whose voting behavior—seems sharply at odds with what would be to their economic benefit. Illuminating the origins of the relationship between religious thinking and economic thinking, together with its consequences, Friedman provides invaluable insights into our current economic policy debates and demonstrates ways to shape more functional policies for all citizens.

What I found in Friedman’s book was not an answer to that question, nor even primarily an explanation of how Arminian theology led to the rise of modern economics. The book could have been one-tenth the length if that was all it did. Instead, Friedman’s thorough and sweeping history showed more about the joint development of religion and economics.

One can’t read Friedman’s book without recognizing the disappointing history of the Western church in (not) engaging with nuance and holding tensions. So many theological debates were essentially “It can’t be both” and then people split by going the way of this or that new theology. Does morality or doctrine matter? (Why not both?) Salvation or ethics? Are humans made in God’s image or sinful? Is God good or holy? (197)

When it came to “orthodox Calvinism,” people didn’t reject a nuanced soteriology that affirms God’s sovereignty working through human agency, but an anemic representation of the Reformed view. That’s the sad historical truth. The Enlightenment accelerated the move away from this flattened, hyperbolic view of predestination because when Enlightenment ideals valued human responsibility and agency to a greater degree, Christians felt compelled to reject one simplistic, unbalanced theology in favor of another. The Enlightenment belief in the supremacy of human reason and freedom clearly motivated the desire to pick a side and embrace simplistic answers.

Christians felt compelled to reject one simplistic, unbalanced theology in favor of another.

Reading Friedman’s account, I wanted to cry out for people to draw more deeply from the rich Reformed tradition rather than abandon it. It’s right to affirm human agency, the benevolence of God, and that human progress is possible—the Bible teaches these—and to also affirm the biblical truths that God is sovereign and holy, and humanity is fallen. The Reformed tradition has deep wells to draw from if you want to hold the myriad biblical truths in beautiful balance.

But refusing to hold biblical truths together is precisely what people are inclined to do. And so the Enlightenment didn’t lead to a retrieval and reworking of Reformed principles but to abandonment of a flattened version of them. People didn’t balance tensions and hold multiple values, but changed camps completely when they wanted to accommodate new values—even values they should have held fast all along. I wish everybody would read Adam Mabry’s Stop Taking Sides. Mabry shows how Christians can maintain unity and resist taking sides. We do this by maintaining the tensions that Scripture does call us to.

Looking Through a Hall of Mirrors

The Enlightenment principles that accelerated theological debates also affected Smith’s thinking on human responsibility and the potential for progress. The story is not so simple as “religion drove the development of thinking elsewhere,” but developments in politics and economics and religion all reflected and affected each other. Rather than a linear development, the theological and economic history felt like looking through a hall of mirrors, with thinking about religion and politics and economics all reflecting the others. Friedman argues that we are often unaware of just how much our theology affects our thinking on economics and politics, and vice versa. I think he’s right.

First, religious commitments often amplified, refracted, and deepened other commitments in society, and that’s important. When certain perspectives got codified and crystalized in theological principles, it became much harder to have balanced discussions on political and economic issues. The chasm between opposing viewpoints became wider when cast in theological terms (e.g., 315).

Consider one example. Friedman shows that for several hundred years, economic thinking reflected a strong postmillennial theology (276). The shift from a predominantly postmillennial to premillennial plausibility was driven in part by the historical experiences of the Great Depression and the World Wars (358). Changing historical perspective on the limits of human progress was reflected in both theology and economics. As economic views were reinforced by views on the millennium, different Christians drew wildly different conclusions regarding economic policies.

When beliefs about human progress and agency are held in concert with other biblical values, we can navigate difficult conversations about economic and social policies with balance and nuance. But when our perspectives get flattened into one-dimensional theological commitments, we might lose that balance and nuance—especially if we lose respect for those who disagree with us.

The chasm between opposing viewpoints became wider when cast in theological terms.

Second, the hall of mirrors was distorted. People made numerous category errors, drawing unwarranted conclusions about economics and theology. Arguments might resemble this: “People don’t earn salvation so they can’t do anything to improve their spiritual condition; hence, people also can’t do anything to improve their economic condition (category error)—but wait, economic progress is possible, so people clearly can improve their condition, so maybe salvation is by works” (e.g., 167). Faulty theological reasoning like this often led to wholesale rejections of orthodox Christianity.

According to Friedman, being a mainstream economist and a “predestinarian orthodox Calvinist” doesn’t make historical sense. Maybe it doesn’t make sense when people hold a theology that is too flattened to simultaneously affirm and value the many truths we find in Scripture.

But you can (and should) value human agency and believe that humans can improve society in meaningful ways, and believe that God is sovereign in salvation and history and that the restoration of all things occurs when Jesus returns. And you can (and should) recognize that navigating economics and politics often requires a complex balance of values and beliefs. Maybe, at times, we’ve unnecessarily and unknowingly let flattened theological views determine our perspectives on other issues.