Editors’ note: Taking the advice of C. S. Lewis, we want to help our readers “keep the clean sea breeze of the centuries blowing through our minds,” which, as he argued, “can be done only by reading old books.” So to that end we continue our Rediscovering the Forgotten Classics series as we survey some forgotten and lesser-known Christian classics. Given the political upheaval in recent weeks and months, we asked Bruce Ashford to highlight an overlooked work of political theology that uniquely encourages and equips Christians today.

The 2016 election cycle put on full display the dysfunctional, vitriolic travesty that is American politics and public life. Any person with only the dimmest spark of critical reflectiveness can recognize the social, cultural, and political breakdown in our nation.

Of course, the more difficult task is to identify the causes of that breakdown and offer a way forward. For that task, the work of Canadian political scientist David Koyzis is especially helpful. In Political Visions and Illusions: A Survey and Christian Critique of Contemporary Ideologies (2003), he argues that the problem with modern politics isn’t found principally in political parties, disputes, candidates, or policy issues. Rather, it’s discovered in the deeper, more pervasive phenomenon of idolatry.

According to the Bible, idolatry is absolutizing some aspect of God’s creation. Instead of worshiping God as God, we elevate some part of his creation to the level of ultimacy reserved for him alone. Thus an idol—or a combination of idols—sits on the thrones of our hearts, commanding our loyalties and shaping our lives.

Idols sit on the thrones of our hearts, commanding our loyalties and shaping our lives.

Yet it would be a mistake to think the effects of idolatry are limited to the private lives of individuals. Idolatry and its negative consequences spread like a plague, radiating outward from a person to society as a whole. As idols move into politics and public life, they manifest themselves in modern political ideologies. As Koyzis argues, every modern political ideology tends to deify—or idolize—some aspect of the created order.

Here are four such political idols.

In its earlier forms, liberalism arose from within the Christian tradition and wasn’t idolatrous. By definition, it denoted commitment to a constitutional and representative government that emphasized liberty and personal freedom. Yet it quickly took on ideological dimensions by absolutizing individual autonomy.

Liberalism’s emphasis on the individual reduces the community to little more than a collection of autonomous individuals, and government to a “necessary evil.” Early on, liberals insisted that the state should be minimal, existing only to protect individuals and their property. Before long, though, they expanded the state so that it would protect them from more ambiguous threats, such as lack of resources.

Eventually, liberals came to expect the government to accommodate their personal desires—and to do so in a religiously and morally neutral manner. So when a person’s poor judgment or immoral choices cause negative consequences, a liberal populace expects the government to ameliorate or even eliminate the consequences (e.g., “Have you fathered five children out of wedlock? We’re happy to tax other citizens to alleviate the consequences of your actions, but we’d have been even more happy to take those children’s lives in the womb beforehand.”).

Every modern political ideology tends to deify some aspect of the created order, thereby making an idol out of it.

This type of liberalism—“late liberalism” or “secular liberal progressivism”—functions as a false system of salvation. It venerates autonomy, identifies society’s “root evil” as heteronomous authority, and places trust in ideologically liberal political parties promising to maximize free choice. In its worst forms, it forthrightly banishes God so that individuals can freely “create” themselves (e.g., create your own morality or determine your own gender). As a result, citizens in a politically liberal regime lose freedom as government inevitably swells to enormous proportions; and they experience a degraded civic life because of the combination of vanishing community and disintegrating moral norms.

2. Conservatism (tradition as source of norms).

Conservatism is often viewed as the polar opposite of liberalism. Yet, as Koyzis notes, conservatism isn’t a single, stable, or unified ideology we can encapsulate in an identifiable doctrinal position. It doesn’t even qualify strictly as an ideology, since it tends to feed off other ideologies. Its tendency is to “conserve,” and usually it seeks to conserve a particular era in a nation’s cultural heritage. Conservatism tends to deify a certain era in national life and ascribe evil to grand social reform agendas.

One problem with pure conservatism is that it’s always “on the move.” Like progressivism, it’s less an abstract ideology than a contextual response. Consider American “conservatism,” whose adherents are having the most difficult time making tactical—much less strategic—alliance with each other. From our nation’s cultural heritage, what are conservatives trying to conserve? Individual liberty? Moral norms? The economic conditions of a previous era? Ethnic primacy?

Regardless, a pure social conservatism elevates “cultural heritage” to a level of ultimacy reserved for God alone, and for that reason it has a twisting and distorting effect socially and culturally.

Nationalism takes on ideological tendencies, Koyzis avers, when a people absolutize the nation, viewing it as the savior that’ll protect them from being ruled, corrupted, or influenced by nations and peoples different from them.

In the modern West, nationalism often manifests itself as an inordinate allegiance to a modern nation-state. Nationalists usually view their nation as superior to others in the ability to exemplify some transcendent value. For Americans, this value is usually freedom. Since our nation possesses the highest virtue, the argument goes, we must be God’s favorite. This thinking goes beyond patriotism (which is healthy and good) to idolatry. 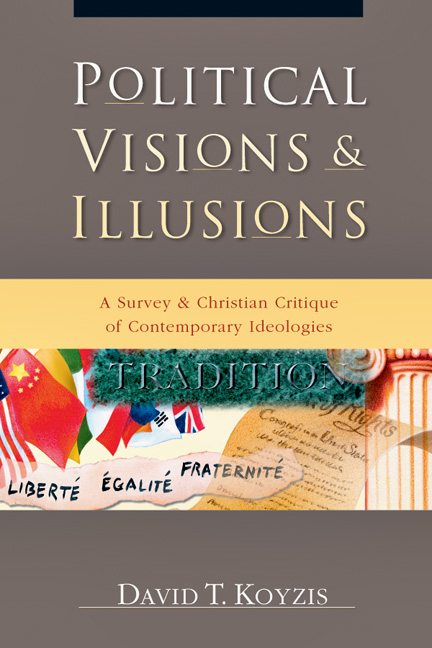 In this comprehensive study, political scientist David Koyzis surveys the key political ideologies of our era, including liberalism, conservatism, nationalism, democracy and socialism. Each philosophy is given careful analysis and fair critique, unpacking the worldview issues inherent to each and pointing out essential strengths and weaknesses. Koyzis concludes by proposing alternative models that flow out of Christianity’s historic engagement with the public square, retrieving approaches that hold promise for the complex political realities of the twenty-first century.

Yet nationalism also manifests itself in ethnic or tribal varieties. Consider the re-emergence of white nationalism in the past decade, and especially during the 2016 election cycle. Proponents such as Jared Taylor and Richard Spencer argue that black communities are uncivilized and unable to perpetuate civilization, that they have corrupted our nation, and that white people should therefore give preference to whites and seek to preserve whiteness above all else.

This type of ethno-nationalism functions as a false and grotesque religion. It claims to seek justice—which is noble and reasonable—while failing to value or protect those not of its kind. A Christian political view subverts nationalism by refusing to deify a nation or locate its root evil in “otherness,” and by rejecting political platforms or politicians who aspire to restore a nation’s greatness by elevating one group of citizens over another. A proper Christian patriotism will engender humble patriotism rather than arrogant nationalism.

Socialism comes in many varieties. Some versions take a revolutionary approach, others a more gradual and peaceful approach to undermining the free market. Some base their claims in science, others in philosophy or religion. Nonetheless, all variations of socialism have in common an impulse toward coercing society toward material equality and communal property ownership. Although these factors are economic, they can’t be realized without the exertion of political force.

Socialism deifies material equality, locates evil in material inequality, and then vests “communal ownership” with messianic qualities to fix society. Historically, Marxist states have become inherently totalizing (employing coercive power in their micromanagement of every dimension of life) and radical (wanting to reconstruct society from the roots up). Socialist states have a long and sordid history of harming the economies of nations who adopt it as an official ideology; although socialism increases “equality” in those nations, it’s the type of equality ships experience when they all sink with a receding tide.

How should we respond to these modern political ideologies? We should affirm the good intentions and insights found in each, while at the same time anathematize their idolatrous corruption and misdirection. And—as Koyzis does in the last several chapters of Political Visions and Illusions—we should work together to construct a non-ideological alternative for Christians who wish to recognize God’s sovereignty over the nation and draw upon our Christianity to work for the common good.

For this task, we’ll need to raise up a generation of Christian political theorists and public intellectuals like Koyzis—thinkers who view the gospel as a public truth that challenges society as a whole. These Christian thinkers will soak themselves in the biblical narrative so that they’ll be able—reflexively and intuitively—to challenge the reigning narratives of politicians, parties, and cable news networks. They’ll unmask the follies that dominate the public square, challenging societal axioms with biblical ones. They’ll challenge every modern ideology—including those on the left, right, and everywhere between.

The task won’t be easy for young Christian thinkers who wish to bring the West—as Lesslie Newbigin put it—into a missionary encounter with the gospel. It’ll be difficult, but no matter how arduous it turns out to be, we can’t be alleviated of our responsibility.

So we must enter the American public square with the same humble confidence with which the early church entered the Roman public square. We’re confident because the Lord will return to restore his kingdom; we’re humble because it’s he, not we, who’ll set the world aright; and in light of those truths, we’re determined to witness to his kingdom and be the heart and strength of every good movement of American political concern.

Previously in this series: