Ryszard Legutko’s The Demon in Democracy: Totalitarian Temptations in Free Societies is an unnerving, challenging, and in some ways unsatisfying book. His thesis is simple: Liberal democracy isn’t even remotely the opposite of communist totalitarianism. In fact, despite its rhetoric of freedom, openness, diversity, and tolerance, Western liberal democracy has become (or just is?) a different and arguably far more effective engine of totalitarianism. Whatever their fundamental differences, there’s a great deal of “interplay” between these two political regimes.

One could easily dismiss this argument as the raving of a deep-seated cynic, as the sour grapes of a Polish anti-communist left out in the cold and forced to watch former communists and collaborators populate the post-Soviet political system, or as a patriotic nationalist who just hates the idea of the European Union.

But The Demon in Democracy isn’t the work of a cynic, sore loser, or national cheerleader. It’s the work of a thoughtful political philosopher. In five chapters, Legutko seeks to demonstrate that communism and liberal democracy have shared (not antithetical) perceptions of history, the future, politics, ideology, and religion. And these shared presuppositions lead inexorably to coercive intrusion into every thread of social fabric (i.e., totalitarianism). These are bold claims, and one thing that makes the book so unnerving is how easily Legutko makes his case.

The book challenges readers because it combines extremes; it’s at once sweeping in its conceptual scope, yet simultaneously granular in its analysis. Legutko’s prose is dense enough to require a lot of concentration (possibly an effect of translation), yet filled with “eureka!” moments when elusive ideas are suddenly transformed into blindingly obvious facts. It’s a workout, yes, but worth the effort.

I can only offer the briefest of summaries, and will scarcely do it justice. Liberal democracy and communism are both modernization projects that share (ch. 1) skepticism of the past and (ch. 2) enthusiasm for a promised utopian future. The mechanism of change is (ch. 3) politics, and since injustice and inequality are found everywhere in society, everything is politicized. Persuasion in these regimes isn’t achieved by intellectual argument, but by (ch. 4) indoctrination into an a priori ideology. For both, the enemy of progress is found in (ch. 5) old tradition-propagating institutions like the family and the church.

In this review I’ll highlight two impressions, and then offer two criticisms.

First, many believe totalitarianism is kept at bay by the political mechanisms of “democracy” in conjunction with the “liberal” ideals of freedom, diversity, and tolerance. Legutko’s book is a sober (or, as I say, unnerving) warning: Political architecture, important as it is, can’t by itself keep coercion at bay. Constitutions are helpful, but they can’t save. In fact, Legutko believes Western liberal democracy has proven more effective than communism at shrinking the realm of what ought to be private, voluntary, non-political affairs. Worldview matters, and in Western liberal democracies we’re witnessing nothing less than the coercive implementation of a wholesale redefinition of the nature of humanity. Less brutal and bloody than the communist version? Yes. But also more ambitious and more effective.

Second, this argument leaves one with the overwhelming sense that religious neutrality with respect to politics and public affairs is a mirage. Legutko warns that the church is bound to get into permanent conflicts with liberal democracy in matters of morality, and there’s no place of retreat:

Liberal democracy, like socialism, has an overwhelming tendency to politicize and ideologize social life in all its aspects, including those that were once considered private; hence, it is difficult for religion to find a place in a society where it would be free from the pressure from liberal-democratic orthodoxy and where it would not risk a conflict with its commissars. (166)

We may wish to retreat from public affairs to some kind of ecclesiastical private domain, but there is increasingly no such thing as a private domain. 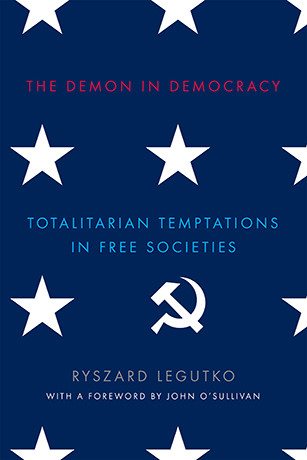 The Demon in Democracy: Totalitarian Temptations in Free Societies

The Demon in Democracy: Totalitarian Temptations in Free Societies

How grim is the situation for Christianity? This woke me up:

If the old communists lived long enough to see the world of today, they would be devastated by the contrast between how little they themselves had managed to achieve in their antireligious war and how successful the liberal democrats have been.

All the objectives the communists set for themselves, and which they pursued with savage brutality, were achieved by the liberal democrats who, almost without any effort and simply by allowing people to drift along with the flow of modernity, succeeded in converting churches into museums, restaurants, and public buildings, secularizing entire societies, making secularism the militant ideology, pushing religion to the sidelines, pressing the clergy into docility, and inspiring powerful mass culture with a strong antireligious bias in which a priest must be either a liberal challenging the church or a disgusting villain. (167)

Searching for an Alternative

Legutko is so effective in prosecuting his case that readers may yearn for relief, anything to alleviate the profound discomfort of discovering that our system of government doesn’t secure liberty after all.

Surely when he says “liberal democracy” he can’t mean my version of liberalism, can he? In his foreword to the book, John O’Sullivan indulges this interpretation: “The regime described here by Legutko is not liberal democracy as it was understood by, say, Winston Churchill or Franklin Roosevelt or John F. Kennedy or Ronald Reagan.” However, this strikes me as a bit of wishful thinking. Legutko often gives the impression that the “demon” of coercion is intrinsic to the political system of liberal democracy as such. I suspect this lack of clarity is partly due to disparate meanings of “liberal” in American and European contexts (which he acknowledges), but I found Legutko unsuccessful at untangling the confusion.

This point leads directly to a second criticism: What’s the alternative? As a negative critique, The Demon in Democracy is rigorous and brilliant. He succeeds abundantly in showing the affinities between communism and current regimes of liberal democracy. But as a wholly negative critique, it’s insufficient. The reader is left wondering what he suggests as a replacement for “liberal democracy” (however understood). Clearly, he wants society to recover the ancient paths of the classical and Christian traditions, but offers little of practical value for how this can be done. The book is begging for a sequel.

Some of the more illuminating portions of the book concern the rising anti-Christian sentiment and why it’s necessary to the liberal democratic project. Though a daunting challenge for Christians, Legutko offers a sliver of hope from his Polish experience: “At the end of the day it turned out that the fear of religion was justified: the Pope had indeed far more troops than the communist dictators. It is quite possible that the anti-Christian crusaders of today are haunted by a similar fear” (160).