Between May 1831 and February 1832, Alexis de Tocqueville (1805–59) and Gustave de Beaumont (1802–66) traveled throughout the United States, making observations on the progress of the democratic experiment in North America. Tocqueville wrote his classic two-volume Democracy in America, in which he marveled at the progress of “equality of conditions” in the United States since winning its independence from Great Britain. He wrote in the introduction: “I sought there the image of democracy itself, with its inclinations, its character, its prejudices, and its passions, in order to learn what we have to fear or to hope from its progress.”

Though Tocqueville’s America is now long gone, we Americans have much to gain from a fresh reading of Tocqueville’s work in 2017. Church leaders have particular reasons for turning to Tocqueville for wisdom as they engage the culture with the gospel. His observations of “Jacksonian America” can offer wisdom for us as we navigate the complexities of our own world, and the challenges we face in our civil discourse.

Here are five reasons we should return to Tocqueville’s work as a guide to help us preserve liberty and avoid what he called “democratic despotism.”

1. Tocqueville taught what public spirit is, how it can be cultivated, and how it preserves liberty.

Tocqueville was most impressed with the New England townships, where he saw liberty flourishing most fruitfully. In these local communities, individuals worked together to invest in the success of their towns. Everyone had a personal stake, and as the town flourished, so did its residents. The greatest number of people exercised themselves in the interests of each local community. Tocqueville called this active engagement in the New England townships a “public spirit.”

We Christians can demonstrate a public spirit by engaging our neighbors with genuine love. Tocqueville observed in the New England public spirit an others-centeredness. For Christians, “public spirit” is nearly synonymous with ministry, which is driven by sacrificial love of neighbor (cf. Luke 10:25–27). 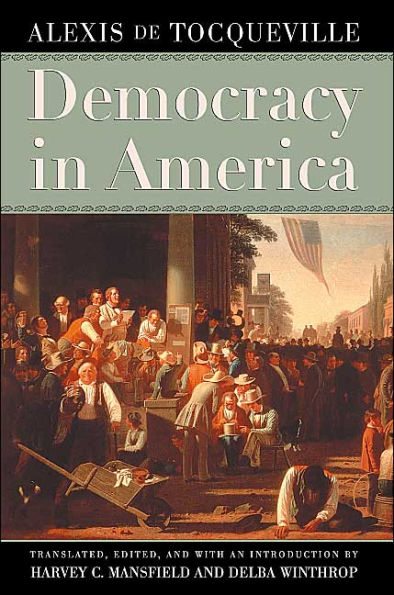 In our day of political, economic, and social rancor and division in America, Christian ministry—or public spirit—can make the greatest mark in our local communities. Rather than being pugnacious against those with whom we disagree, we can model a spirit of peace and patience as we’re quick to listen. We can sometimes advance the cause of Christ more by listening with a teachable heart than by rushing to win an argument.

2. Tocqueville observed that voluntary associations were the most important guard against tyranny.

Tocqueville was amazed at how Americans organized themselves into associations in efforts to solve local problems to meet local needs. Americans associated together for all kinds of purposes: to form hospitals and schools, to spread literacy, to embark on moral campaigns, to initiate prison reform, to fund seminaries, and to start churches. Whereas the French relied on government to address local issues and the English looked to aristocrats, Americans formed associations among themselves to meet social needs directly. He observed, “Wherever at the head of some new undertaking you see a government in France, or a man of rank in England, in the United States you will be sure to find an association.”

The most potent voluntary organization in Tocqueville’s time, and in our time, is the local church.

The most potent voluntary organization in Tocqueville’s time, and in our time, is the local church. We gather together to worship Christ, to hear the Word of God preached, and to enjoy Christian community. But we also gather together to receive vision for reaching our neighbors, to be encouraged as we go forth into our towns and cities with the gospel, and to be a base of operations for gospel ministry. Indeed, local churches are critical as lamps that cannot be hidden within a darkened culture.

3. Tocqueville understood that a people’s manners inform and shape the state’s laws.

Tocqueville believed that while America’s laws were important to the progress and shape of democracy, it was the people’s manners—what he called “habits of the heart”—that actually shaped the laws. What informed these manners? In a word, religion. The churches preached Christian morality, and Christian morality shaped the customs—the “character of mind”—of Americans. And the laws were thus shaped by the people’s manners.

Pastors and church leaders have in Tocqueville an important lesson here—they are perhaps more influential than they know. When the glory of Christ, the advance of the gospel, and the flourishing of people are at the center of a pastor’s focus, the culture of that community begins to reflect those values.

Tocqueville, as an outside observer to life in America, saw the stark reality of slavery when he traveled to the South. But as appalled as he was, he thought the real racial problem in America was the stubborn prejudice that undergirded slavery. He believed that slavery would eventually be abolished, but that African Americans would continue to suffer from racial prejudice. He saw in such racial prejudice the real potential for the destruction of the Union. His trepidation proved accurate 30 years later.

Unfortunately, Tocqueville offered no wisdom, no prescription for the problem of race prejudice in America. But he did see clearly how this prejudice flew in the face of American political ideals. He also saw how racial hatred betrayed the people’s manners, which were stamped so indelibly by Christian morals. And the hypocrisy disgusted him.

Tocqueville saw clearly how racial prejudice flew in the face of American political ideals. . . . The hypocrisy disgusted him.

A profound challenge for pastors in America today is racial reconciliation. The most important first step toward eradicating racism in all its forms—both visible and invisible—is honest, compassionate, and self-sacrificing dialogue. If racism is sin—as all reasonable Christians agree—then healing can only come with confession, repentance, and accountability. Tocqueville had no solutions to racial prejudice. But the gospel of Christ does.

One of the many beauties of the gospel is that its message is supra-national. It transcends nations and nationalisms. As the prophet Isaiah said of the coming Messiah:

It is too light a thing that you should be my servant to raise up the tribes of Jacob and to bring back the preserved of Israel; I will make you as a light for the nations, that my salvation may reach to the end of the earth. (Isa. 49:6)

Racial reconciliation is more than an auxiliary concern for Christians. Indeed, the redemption of humanity—every tongue, language, and ethne—accomplished by Jesus Christ is at the center of the Christian faith. While Tocqueville may have no redemptive solutions to offer, he was one of the first to link America’s racial divide with the deeper problem of racial bigotry, not just the outward manifestation of slavery.

Christians have the opportunity to lead the way on this issue, because we carry the exceptional and divine answer to this fundamental problem of human fallenness—that Christ died to save sinners and to absolutely and completely reconcile humans to God and to one another.

Welfare of the City

Church leaders have particular reasons for turning to Tocqueville for wisdom as they engage the culture with the gospel. Tocqueville noted the preserving effects of Christianity through the mediation of the churches upon society. So far reaching were those effects, in fact, that Tocqueville believed Christianity was indispensable to the preservation of liberty in America.

If he was right—and I believe he was—then those who shepherd Christ’s flock ought to turn to Tocqueville’s wisdom to find ways in which to fulfill the spirit of Jeremiah 29:7: “But seek the welfare of the city where I have sent you into exile, and pray to the LORD on its behalf, for in its welfare you will find your welfare.”

John D. Wilsey is assistant professor of history and Christian apologetics at Southwestern Baptist Theological Seminary. He is the author of American Exceptionalism and Civil Religion: Reassessing the History of an Idea (IVP Academic, 2015) and has edited an abridgment of Alexis De Tocqueville’s Democracy in America (Lexham Press, 2016).

3 The Hidden Harm of Gender Transition

5 9 Things You Should Know About the Christian Flag