When parents first hear the words “I’m gay” from a son or daughter, the ensuing flood of emotions and fears can feel overwhelming. Ann Mobley first heard these words from her son Dan more than 20 years ago, and she has now written a timely resource for parents working through this difficult and complex set of issues: If I Tell You I’m Gay, Will You Still Love Me?: One Mother’s Journey to Truth and Grace.

You will first notice the remarkably personable tone of this book. Mobley relates her story as if she were a longtime family friend who has invited you into her living room for a long chat after returning from an extended out-of-town trip. She spares no detail, painting the portrait of a home turned upside down with confusion, anxiety, and grief at the initial awareness of her son’s homosexuality.

Mobley, who now leads workshops and training sessions to equip Christians to respond with compassion to gay people, spends the first two chapters recounting the chain of events that unfolded after Dan divulged to her the truth about his homosexuality. In fact, the key to understanding the entire book is found on the second page, where Mobley describes how Dan finally told her over dinner one day, “Mom . . . I’m gay”: 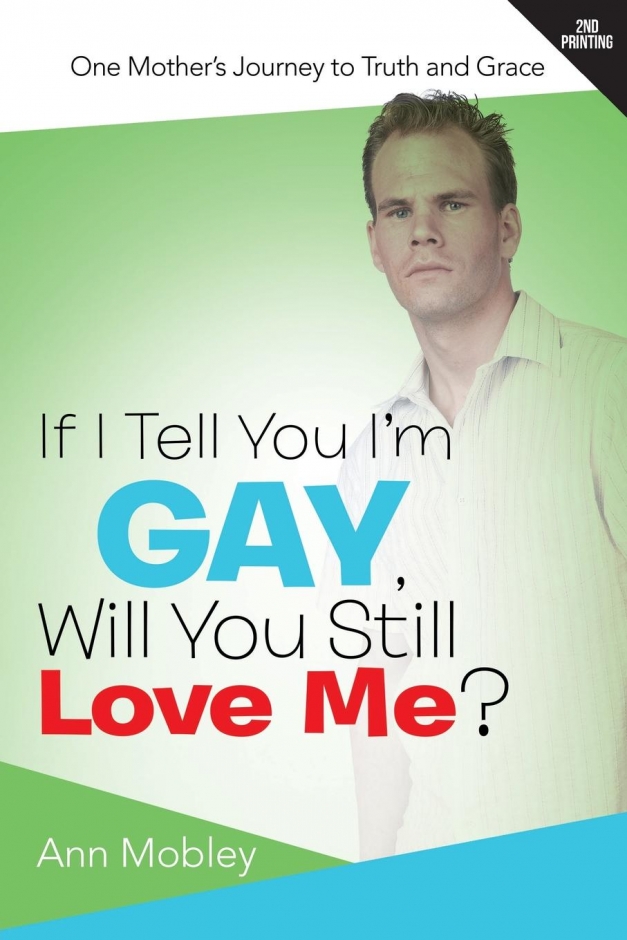 If I Tell You I’m Gay, Will You Still Love Me?: One Mother’s Journey to Truth and Grace

If I Tell You I’m Gay, Will You Still Love Me?: One Mother’s Journey to Truth and Grace

Tears streamed down Dan’s face as he continued. “I’m tired of lying to you and deceiving you. I’ve wanted to tell you for a long time, but I was so afraid you wouldn’t love me anymore, and Mom, I couldn’t handle that. You’re all I’ve got.

After hearing these words and seeing the obvious emotion in her son’s face, Mobley rushed over to where he was sitting, put her arms around him, and said, “Danny, you’re my son, and I love you. Nothing is ever going to change that.”

Appropriately, Mobley then devotes a chapter to exploring the biblical theme of God’s love for his children. Like many Christian parents of gay sons or daughters, Mobley didn’t know how to reconcile her love for her son with her concern that he was making sinful choices. This chapter provides a biblical foundation on which parents can stand as they navigate these unstable waters.

For a book as conversational as this one, I was pleased to encounter a wealth of information about homosexuality itself woven into the narrative of Mobley’s story. She has almost two decades of experience working in ministries dedicated to helping individuals and family members affected by homosexuality, and it shows. Entire sections of each chapter are interspersed with quotes and references to resources that have helped her make sense of the complicated issues surrounding the topic. Readers will no doubt benefit from her careful collation of the material found in these resources.

In addition to the biblical principles and helpful background information Mobley shares, readers will also benefit from the discussions about more practical matters:

Besides the variety of clearly positive aspects of this book, readers might find one particular element to be somewhat curious. Mobley seems to support the practice of reparative therapy, or what’s become known popularly in the media as sexual orientation change efforts (or SOCE). Reparative therapy is a collection of counseling methods and theories whose explicit goal is to reduce or eliminate homosexual attractions. She cites an important book by Christian psychologists Stanton Jones and Mark Yarhouse titled Ex-Gays?: A Longitudinal Study of Religiously Motivated Change in Sexual Orientation as evidence that reparative therapy can be successful. Specifically, their study found that 23 percent of participants reported a successful conversion to heterosexuality, and another 30 percent achieved a satisfactory level of reduction in their same-sex attractions. Some evangelicals might wonder, however, whether or not the “change” gospel transformation promises Christians is primarily psychological, as some who practice reparative therapy might suggest. Scripture promises us that the all-sufficient grace of Christ can carry us through our temptations, not that it might remove them entirely.

Despite this isolated misgiving, Mobley’s book ought to be on every pastor’s “first-response” list when ministering to parents of gay sons and daughters. Her long-term experience, biblical wisdom, and personable tone will be a comforting and stabilizing influence during what is an inevitably tumultuous and fearful period in the life of a Christian family.

Nate Collins is the executive director of Aligned Grace Resources, a ministry he founded with his father to equip churches to minister the grace and truth of the gospel to people affected by same-sex attraction. Nate and his wife, Sara, live with their two sons in Louisville, Kentucky, where he is pursuing a PhD in New Testament at the Southern Baptist Theological Seminary. You can follow him on Twitter.