I was sitting across the table from a member of our church who was frustrated about his spiritual growth. He was frustrated about particular sins he was struggling with and how unengaged he is with his unbelieving friends and colleagues. He had only been a Christian for a little less than two years, but he was discouraged that he still wasn’t where he wanted to be.

But after a quick inventory of the past two years, he realized, “Wow, I actually don’t struggle with anger quite like I used to. And I’m more eager to read my Bible than before.” Not to mention that he spends his Monday nights going over his notes from my last sermon with his unbelieving parents.

Identifying growth wasn’t meant to discourage him from continuing to fight for holiness. Rather, it was meant to show him how grace has changed him from where he was before. Still, he’ll have to wait until Jesus returns to become finally and fully what God has redeemed him to be. If you’ve been a Christian for any number of years, you sense this reality. Theologians call this the “already/not yet,” but most of us just call it the Christian life.

To help us through this “already/not yet” reality, Ed Stetzer, president of LifeWay Research, has written Subversive Kingdom: Living as Agents of Gospel Transformation. Stetzer offers a vision of kingdom-life that takes seriously the difficult New Testament texts that conservative Christians can sometimes ignore without undermining orthodox theology as do many moderate-to-liberal authors when reflecting on the kingdom of God.

Stetzer’s agenda isn’t groundbreaking. But that’s okay, we need people like Stetzer who are writing, speaking, and engaging with others on church planting, evangelism, and mission, and who are consistently bringing us back to the Bible and orthodox conclusions while applying Scripture to the needs of the church today.

Christians, Stetzer argues, are living in a time where we have been redeemed by the cross of Christ but await Christ’s return and full redemption. “Life in the middle” of those two realities can raise a number of difficult questions about our place in this world, our mission, our sin, and how we relate to the world around us.

Christians have a different agenda than the the world’s, because we serve a different King—the true king—hence the “subversive” nature of the kingdom. We are “rebelling against the rebellion,” as Stetzer puts it. 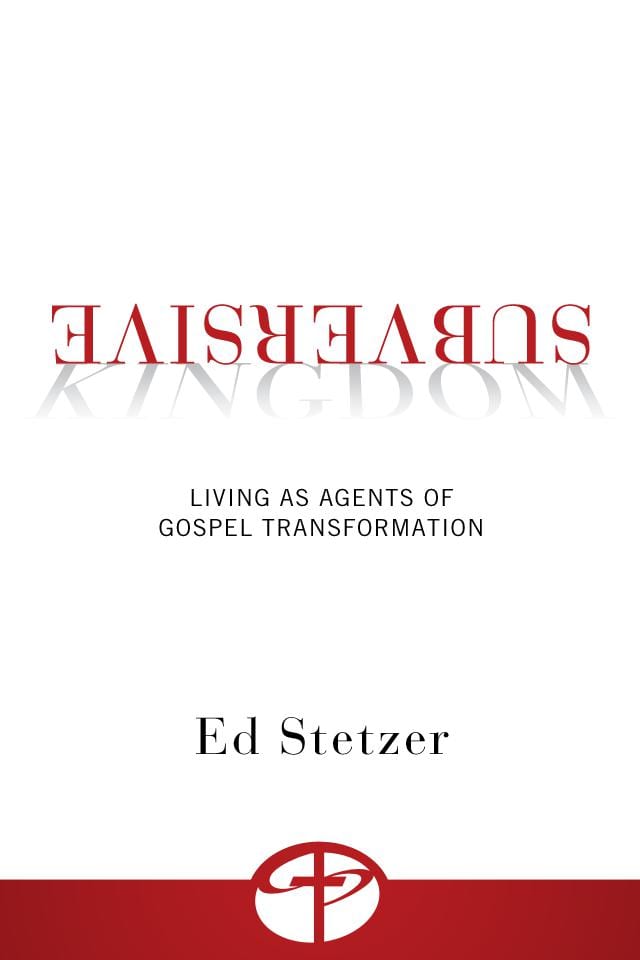 The world is broken—more so than we know. But for those who know that Christ is coming to establish a new and perfect order, ours is not just a world to endure but a world to invade. Believers have not been stationed here on earth merely to subsist but to actively subvert the enemy’s attempts at blinding people in unbelief and burying them under heartbreaking loads of human need.

Using the parables of Jesus on the kingdom, Stetzer points out that this kingdom (1) is informed and initiated by God’s Word, (2) is designed to take place in this world (“on earth as it is in heaven”), (3) uses small things to grow big things and affects lives, and (4) offers joy otherwise unavailable to the human heart.

The kingdom of God changes the private as the well as the public life. According to Stetzer, Christians are uncommonly good; they engage the world by “turning the other cheek” and by radical generosity; and are constanting eliminating personal, cultural, and religious idols.

Because Stetzer’s agenda isn’t groundbreaking, most chapters will be uncontroversial to evangelicals, except possibly the chapter on the church’s mission. In recent months, debates on the nature of the church’s mission have been renewed by Kevin DeYoung and Greg Gilbert’s book, What Is the Mission of the Church?, which was reviewed by Stetzer, to which DeYoung and Gilbert responded.

“If God has a mission, then it should also be the church’s mission,” he writes. “It should orient our schedule and priorities. It should dictate our activities and why we do them.”

He continues: “Because actually, the church doesn’t have a mission; the mission has a church. God, who by nature is on purpose and on task, has invited people like us, gathered in churches like ours, to join him in fulfilling his chief desire. And that mission is this: for God to be glorified.”

After Stetzer cites New Testament verse after verse to show all things are for and to God’s glory, he makes these bullet points:

Stetzer throughout the book relates this mission to the centrality of the proclamation of the gospel (the kingdom is initiated by the proclamation of God’s word) and the Great Commission. But some would fault Stetzer for not distinguishing between the mission of God and the church more clearly. After all, the church doesn’t do everything God does or promises. The church doesn’t condemn individuals to hell or bring in the New Creation. Stetzer is careful not to make the mistakes many authors do in obligating the church to work toward bringing in the New Heavens and the New Earth. However, he is also eager to maintain that God has an end in mind with the creation and redemption of mankind, and the church is the primary means of fulfillment. To distinguish between the two different missions, if I’m following Stetzer’s logic, would seem to make unnecessary, even unbiblical, distinctions.

Because Stetzer isn’t engaging directly in the public discussion with this book, some questions may be raised but not answered in the mind of more engaged readers. Nevertheless, we can all affirm that God’s glory is the end of God’s mission and the mission of the church. This glory comes when the church proclaims the gospel of Jesus Christ. Stetzer’s book will heighten your desire to see that end.