The good news is that Dietrich Bonhoeffer biographies are getting shorter. Eberhard Bethge’s (Bonhoeffer’s best friend, editorial trustee, and confessor—more on him later) was more than 1,000 pages, and Eric Metaxas’s New York Times bestseller was a mere 608. Charles Marsh’s Strange Glory: A Life of Dietrich Bonhoeffer (Knopf) condenses Bonhoeffer’s entire life, cradle to grave, into 528 pages.

The task given to me is to do the same thing in less than 1,000 words. Here goes.

Approach of the Book

Marsh, professor of religious studies at the University of Virginia and director of the Project on Lived Theology, locked himself away in his basement to write Strange Glory. At a book lecture in Nashville earlier this year, Marsh described his desire to write about Bonhoeffer without the bias of personal relationship. Bethge, whom Marsh knew personally, had previously served as both the gatekeeper to Bonhoeffer’s papers and also his best friend. “How did Bethge’s friendship with Bonhoeffer color his work?” Marsh asked. 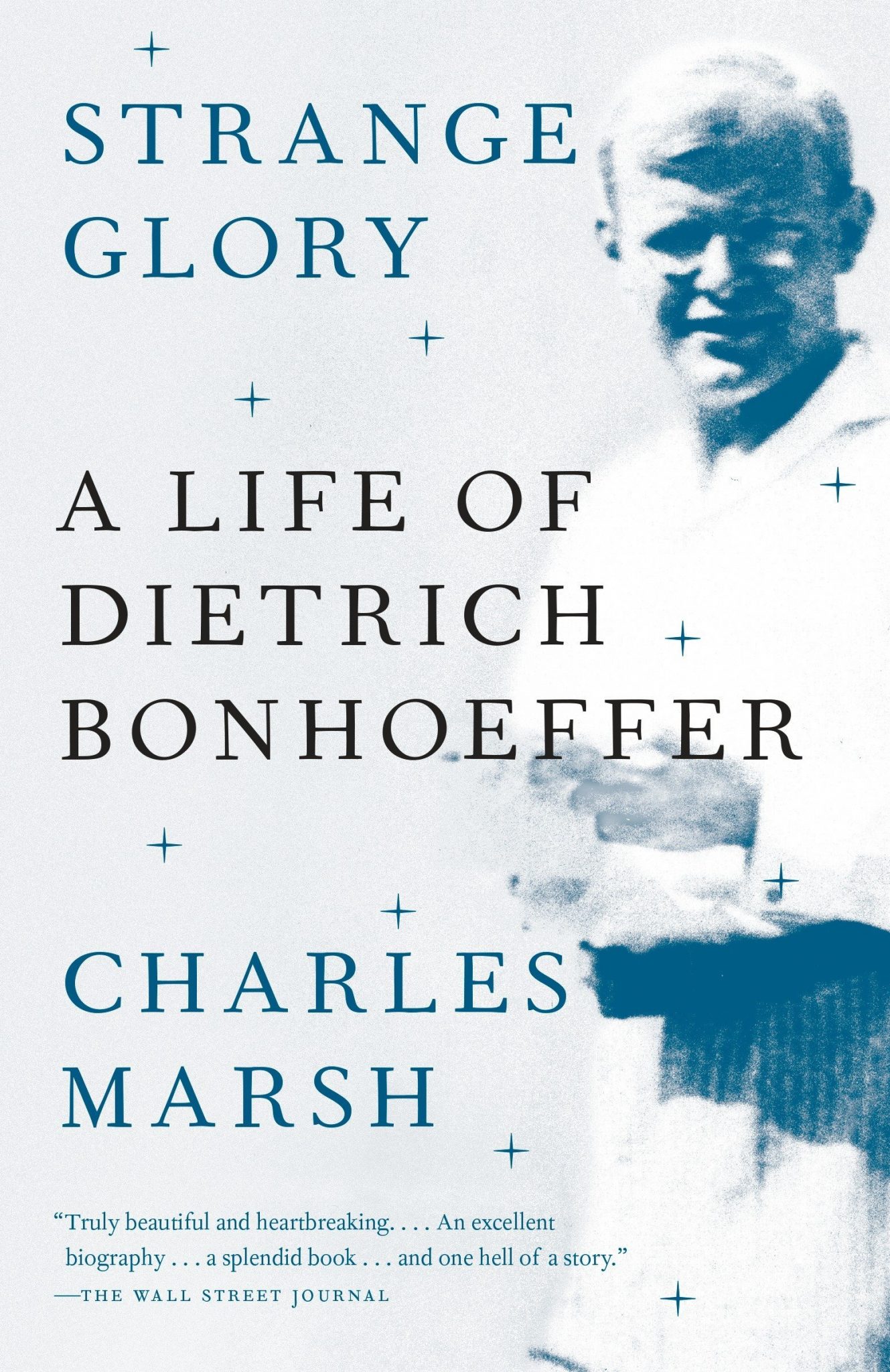 So Marsh set out alone on a 2007 research fellowship in Berlin and combed through documents (archived at the Staatsbibliothek) never seen before by the public, much less an American audience. Marsh acquainted himself with Bonhoeffer anew and, like any historian worth his salt, sought to present the facts as they are, not as they have been interpreted. Back home in America, in his basement and far away from all of the secondary literature (he said he put the Bethge biography out of reach until he finished writing the first draft), Marsh drafted Strange Glory. Initially, Knopf talked to him about writing a short book on Bonhoeffer’s year abroad in America (1930–1931), a truly transformative time in his life. As Marsh began to write, however, the project evolved into a 528-page overarching narrative.

Many Bonhoeffer scholars (including Richard Weikart and Stephen Haynes) have analyzed the diverse range of Bonhoeffers presented in the secondary literature. The “magisterial biography,” according to Marsh, has always been Bethge’s work, which many have used to create a Bonhoeffer in their own image. Marsh’s new offering stands out among the rest in terms of its objectivity (Marsh relies primarily on his own interactions with the primary sources), originality (many of the book’s photographs are published for the first time), and creativity (the prose is simply captivating). Indeed, Strange Glory presents a Bonhoeffer whom casual observers might not recognize but cannot ignore. This is Bonhoeffer in three dimensions.

Sure, the basic storyline of Bonhoeffer’s life is essentially the same. There are no new major events revealed in Strange Glory. Bonhoeffer grew up in an upper-class family in Berlin, successfully defended and published two dissertations before studying abroad at Union Theological Seminary in New York City, worked as an Lutheran pastor in various settings (including Barcelona and London), served as a professor at Berlin University, founded an underground seminary at Finkenwalde, participated in the Nazi resistance movement from within the Abwehr, was imprisoned, and was eventually murdered as an enemy of Hitler in Germany. But the context of Bonhoeffer’s life in Strange Glory is better developed than any other biography in print.

Contributions of the Book

Marsh’s abilities as a first-class researcher are on display as he masterfully constructs the broader historical situations with which Bonhoeffer intersects. For example, Marsh—also a civil rights scholar in his own right—weaves the forerunners of the American civil rights movement in and out of the storyline as Bonhoeffer befriends Frank Fisher at Union Theological Seminary in 1931. The prose is thick with imagery, transporting readers to a Harlem many would just as soon forget. Bonhoeffer’s sitz im leben could not be more accurately, and compellingly, recounted.

Strange Glory also contains an unusually high level of theological nuance for the biography genre. Marsh transitions between Niebuhr, Bonhoeffer, Hegel, and Barthian theology, all with apparent ease. Seldom will you find a biography so well researched, both in terms of its history and also theology, as Marsh’s.

Marsh was apparently quite struck by the level of attention Bonhoeffer gave to his clothing. In nearly every chapter Marsh weaves in a comment by Bonhoeffer or another friend regarding the style or condition of his clothes. This is one way Marsh projects Bonhoeffer as a high-maintenance socialite. Marsh curates Bonhoeffer’s letters, personal records (Bonhoeffer kept meticulous records of everything), and journals in such a way as to construct a history of Bonhoefferian aesthetics. He calls him a “fashion-hound.”

But that’s not the only way Bonhoeffer was high maintenance, according to Marsh. In Strange Glory, Bonhoeffer is emotionally suffocating toward those he cares about most. Marsh observes, “Bonhoeffer’s emotional resources, it must be readily acknowledged, were not equal to his intellectual ones, even at this mature age” (307). From a young age Bonhoeffer had extremely high, often demanding, expectations for friendship—a fact Marsh relies on to imply some rather suggestive ideas regarding the nature of Bonhoeffer’s relationship with Bethge.

Many reviewers and bloggers have fixated on whether Marsh has outed Bonhoeffer as having been romantically attracted to Bethge (e.g., The Daily Dish, Christianity Today, Wesley Hill). To be sure, a major theme of the latter half of the book is Bonhoeffer’s bizarre and emotionally complicated relationship with his spiritual confidant at the underground seminary. The closest thing to convincing evidence comes when Marsh writes, “Some seminarians, indeed, wondered whether Bonhoeffer had fallen in love with the boyish country pastor [Bethge]” (236), or that they shared a bank account and mailed Christmas cards together. But I would tend to agree with Timothy Larsen’s sentiment in his review for Christianity Today: “This turns into a major, recurring theme in Strange Glory. It fascinated me at first, but I grew tired of Marsh directing the camera angle of every scene so as to rather heavy-handedly keep it in view.” Marsh seems to diagnose Bonhoeffer’s engagement to Maria Von Wedemeyer as a reluctant imitation of Bethge (who was engaged to Renate Schleicher shortly before Bonhoeffer) in an effort to remain close to his “soul mate” (337).

Similar to speculation regarding the nature of C. S. Lewis’s relationship with Jane Moore, the nature of Bonhoeffer’s friendship with Bethge will serve as a distracting conversation point for the foreseeable future. It’s unfortunate, really, because Marsh’s book has much more to offer about Bonhoeffer than his romantic interests (or lack thereof, depending on your view).

Devin Maddox is the trade books publisher at B&H Publishing Group, and director of the books ministry area at LifeWay. He graduated with a BA in Christian ethics from Union University and an MDiv from The Southern Baptist Theological Seminary. Currently he is completing a PhD in applied theology at Southeastern Baptist Theological Seminary, focusing his research on Dietrich Bonhoeffer’s early life and writing. Devin is married to his college sweetheart, Cara; they have three boys and live in Tennessee.