The concept of beauty has fallen on hard times among evangelical Christians. In a way, this makes evangelicals no different from Americans and Westerners at large, who seem ever more consumed with the crass and the cheap. But there are particular reasons why evangelicals don’t have much time for beauty, or for crafting beautiful things. One factor is the Reformation’s “solas,” especially sola scriptura, which made Reformed Christians understandably wary of overemphasis on sources of religious authority or inspiration outside of the Bible. Yet something was also lost in the great Reformed campaigns against Catholic art and iconography.

This sense that all we need is the Bible—uniquely inspired and preeminently lovely—has made Reformed and evangelical Christians skeptical about beautiful extrabiblical productions. What we need is biblically accurate preaching, teaching, and writing, evangelicals say. But what of beautiful art, poetry, or fiction? What about preaching filled with striking images and arresting explications?

Especially as Americans entered the early 1800s and the age of the Second Great Awakening, evangelical Christians became distinctly democratic and pragmatic. They valued biblical preaching, evangelism, and gospel-driven activism against everything from drunkenness to slavery. Lingering reflections on the good and beautiful were not especially valued by the common-man itinerants who spread evangelicalism to the American frontier.

The past century has also seen a profound anti-intellectual tendency among evangelicals, who have an (accurate) sense that most of the nation’s greatest universities have turned against traditional faith. But American evangelical subculture has also turned to its own brokers of pop literature, art, and TV—we delight in the shenanigans of the generically evangelical cast of Duck Dynasty but find it tougher to engage with the great music, art, literature, or even preaching of the Christian past.

This lack of interest in beauty would have worried many of our evangelical forebears, even some who were the most fervently committed to the “solas.” Perhaps most obviously, it would have concerned Jonathan Edwards, for whom the beauty of God and of the divine order was arguably the center of his thought. As Michael McClymond and Gerald McDermott note in their magisterial Theology of Jonathan Edwards, Edwards “regarded beauty as fundamental to his understanding of God, as the first of God’s perfections . . . one might interpret the whole of Edwards’s theology as the gradual, complex outworking of a primal vision of God’s beauty.” 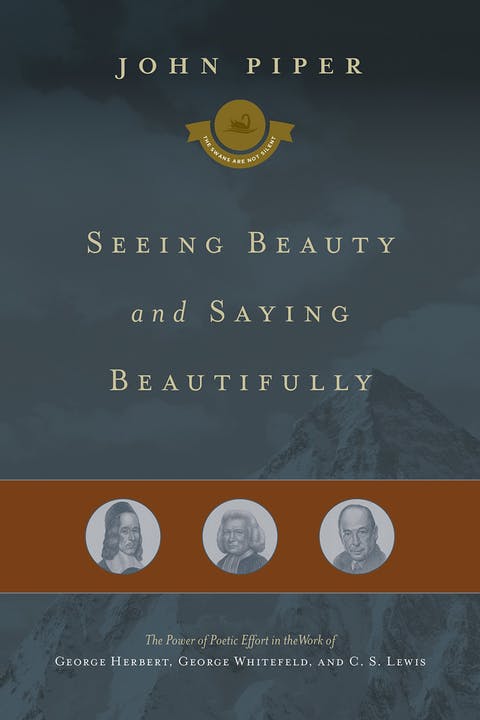 Seeing Beauty and Saying Beautifully: The Power of Poetic Effort in the Work of George Herbert, George Whitefield, and C. S. Lewis

Seeing Beauty and Saying Beautifully: The Power of Poetic Effort in the Work of George Herbert, George Whitefield, and C. S. Lewis

​The Scripture recommends beautiful words as like “apples of gold” (Prov. 25:11) and illustrates such words in genres from David’s poetry to Jesus’ parables. How welcome, then, to read John Piper’s bracing Seeing Beauty and Saying Beautifully: The Power of Poetic Effort in the Work of George Herbert, George Whitefield, and C. S. Lewis, in which the former pastor of Bethlehem Baptist Church reintroduces the power of “poetic effort” by considering three titans of Christian rhetoric: the poet George Herbert, the evangelist George Whitefield, and the apologist and novelist C. S. Lewis. I suspect most readers will know something of Lewis, less of Whitefield, and Herbert least of all. But in Piper’s hands, the combination of these three aptly demonstrates the value of Christians’ literary labors for the glory of God and the edification of the church.

“Poetic effort,” to Piper, is not just writing poems, but working to “see and savor and speak the wonder—the divine glory—that is present everywhere in the world God made, in the history God guides, and in the Word God inspired.” Herbert, the phenomenally talented poet, and Lewis, the compelling author of fiction, literary history, and apologetics, both fit smoothly into this framework. As the author of a forthcoming biography of Whitefield, I was intrigued to see how Piper would handle the evangelist, who may be the least obvious subject of these three. Many, including Christian writers, have disparaged the written text of Whitefield’s sermons as shallow and confused. Even as sympathetic a biographer as J. C. Ryle called his printed sermons a “mingle-mangle.”

Yet we also know that Whitefield was a stunning preacher, impressing even his nonbelieving friend Benjamin Franklin with the power of his oratory. Piper is struck first by the sheer relentlessness of Whitefield’s preaching, which may have totaled upwards of 30,000 sermons and informal exhortations over three decades in ministry. But the emotional resonance and rhetorical craft that undergird Whitefield’s sermons also account for his incredible successes: “Specific biblical passages were chosen, and specific words, sequences, consonances, assonances, cadences, images, narratives, characters, tones, pathoses, gestures, movements, facial expressions—all combined for an astonishing impact.”

Some of the impact of his talents are lost to us, for unlike Edwards, Whitefield’s exceptional brilliance came out at the preaching scaffold, not on the printed page. How I wish we had YouTube videos of Whitefield preaching! We are left only to imagine, and to hear the testimony of the legions—including Edwards—brought to tears by Whitefield’s passionate explication of the Word.

Whitefield was specially anointed as a preacher, but his sermons reflected the fruit of long years of study, preparation, and polishing. His talent for performance did not undermine his doctrinal precision, either. To Piper, Whitefield’s Calvinist convictions animated his passionate performances, to engage audiences’ hearts and minds with the glorious truths about God’s grace and power. Piper’s Whitefield (as well as his Lewis) is no perfect man, and he emphasizes that God used Whitefield in spite of his faults. Most prominent among these was Whitefield’s effort to introduce slavery into colonial Georgia, where it was originally banned, and his personal owning of enslaved people.

American Christians would do well to heed Piper’s advice about the value of beauty, for faith that is junky and shallow will likely convince few. Those few won over by trivialized Christian subculture may not have a durable faith, either. Piper gives full credit, of course, to the role of the Holy Spirit in conversion, and God can use any means, junky or otherwise, to bring people to faith. (I once heard of a man whose initial interest in true Christianity was sparked by listening to Jesus Christ Superstar.) But God creates beauty, and he has gifted us with the ability to create and enjoy beautiful things, too, including beautiful words.

While evangelicals will always put the Bible at the center of our repertoire of God-honoring literature and rhetoric, we have badly ignored the riches of our literary and rhetorical tradition in which many like Herbert, Whitefield, and Lewis have spoken beautifully. In doing so they have helped us to better see God’s beauty.

Thomas S. Kidd is the Vardaman distinguished professor of history at Baylor University and the author of many books, including Who Is an Evangelical? A History of a Movement in Crisis (Yale, 2019); Benjamin Franklin: The Religious Life of a Founding Father (Yale, 2017); Baptists in America: A History with Barry Hankins (Oxford, 2015); George Whitefield: America’s Spiritual Founding Father (Yale, 2014); and Patrick Henry: First Among Patriots (Basic, 2011). You can follow him on Twitter.