Is there any lonelier occupation than that of the Christian intellectual? This species sits between two different bodies, both of which struggle to trust one another: (1) the church, anchored in the Word, and (2) the academy, anchored in credentialed expertise.

The existential loneliness of the Christian intellectual shouldn’t obscure the fact that this strange species does yet endure, even thrive. In the postwar era, numerous figures attained eminence for their public work. One of the best of this brave band was Richard John Neuhaus, the famed editor of the journal First Things, long the gold standard of religious engagement with the American polis.

Neuhaus (1936–2009) is the subject of a readable and incisive new biography by Randy Boyagoda titled Richard John Neuhaus: A Life in the Public Square. Boyagoda, who serves as professor of American studies at Ryerson University in Toronto, traces Neuhaus’s life chronologically, ranging over his childhood as a conservative Lutheran pastor’s son, his iconoclastic seminary experience as a social justice proponent, his early career as a New York City pastor to a humble congregation, and his eventual ascendance as one of the leading public intellectuals in America. 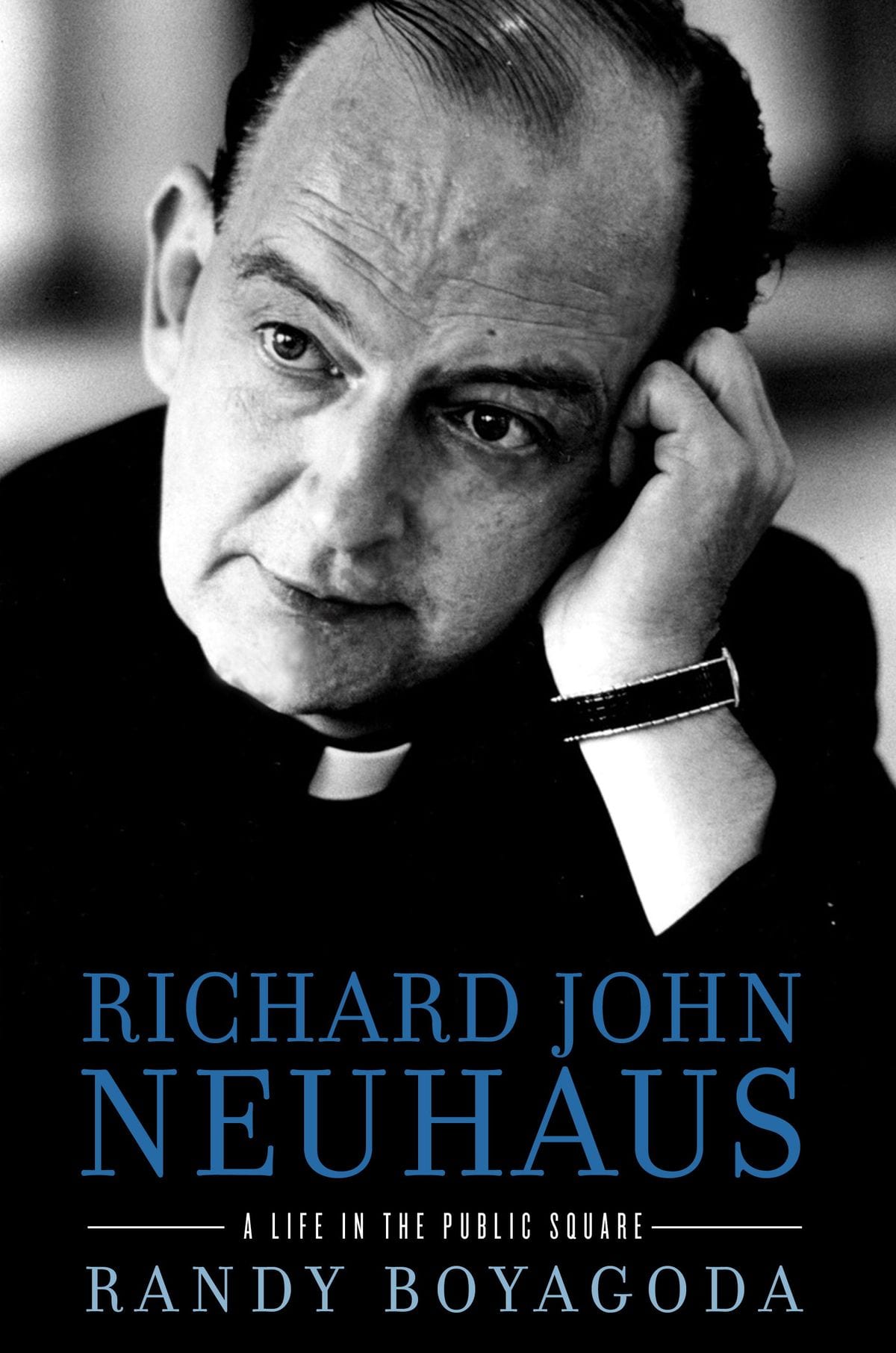 Neuhaus had a knack for ending up in the center of things, whether that be a Martin Luther King, Jr. march, a colloquy with Cardinal Ratzinger, or the presidential administration of George W. Bush. Bush famously said Neuhaus helped him “articulate these things,” meaning religious truths bearing on political life (357–58). Neuhaus surely emboldened Bush’s pro-life convictions: “Every child welcomed to life and protected by law” was the elegant language Neuhaus helped craft for the president. Their interaction led to many salutary effects, though in other areas the president’s folksy ways persisted.

1. Neuhaus’s career reminds us that institutions are people.

In other words, institutions are only as vibrant and consequential as the people who lead them. Everywhere Neuhaus served, he enlivened the place and expanded its reach. This was as true at St. John the Evangelist in Brooklyn as it was at First Things. Neuhaus had that quality unique to a certain few that allowed him to see unprioritized needs and then magnetically draw others to the cause. This ability was not unrelated to the power of the pen, a gift Neuhaus possessed to the full (398–99).

In our time, if we are to build lasting institutions that serve and perhaps renew aspects of the body politic, we must have leaders who can animate those institutions. It’s easy to snipe at the Religious Right, but it’s harder to put skin in the game and actually lead something. Neuhaus was part of a generation who knew this truth at a perhaps subconscious level and acted on it with alacrity. His was the era, after all, of born-again Chuck Colson, swashbuckling William Buckley, and evangelist-statesman Billy Graham.

2. Neuhaus’s program calls us not to hide our light.

There’s a discomfiting pattern that sometimes plays out with Christian leaders: they start solidly, then become famous, then disown much of their earlier platform. The endpoint seems to suggest the doctrine was nothing more than an escalator to fame.

Neuhaus enjoyed his celebrity, to be sure. He could be unctuous in his dealings with White House officials, for example (350). Neuhaus loved the light, but he also loved the spotlight. He did not, however, shrink back from broadcasting stubbornly countercultural convictions. His statements on the pro-life cause never wavered in their intensity. He doggedly defended religious freedom. In The Naked Public Square: Religion and Democracy in America (1984) he presented a brilliant case for religion as a public good, a case we still need today (see 231–47).

Of course, Neuhaus’s intellectual framework had splinters. It was sturdy, impressive in construction, but it invited regular controversy. Boyagoda gives little attention to Evangelicals and Catholics Together (ECT), Neuhaus’s joint venture with Colson, but it drew criticism from all sides. Neuhaus, raised a Lutheran but a late convert to Catholicism, persisted in his belief that the two traditions could collaborate. In 2015, the great theological questions remain, but evangelicals and Catholics have found a lot of common cause in recent days in the public square. Neuhaus’s legacy with ECT may not be full communion, but neither is it any less than friendly cobelligerence.

3. Neuhaus shows us that serious intellectual investment can pay off handsomely.

We need Neuhaus, just as we need Carl F. H. Henry, and just as we need the Inklings. The church too easily loses sight of the power of the intellect. I’m not exactly sure why. Perhaps because Scripture is true and good and because the gospel is simple in formulation, we can be tricked into embracing an intellectually malnourished Christianity. Honey, I shrunk the faith once for all delivered to the saints.

Even readers who don’t hold Neuhaus’s full doctrinal convictions will come away from this biography freshly impressed by the man’s example. Christians hungry for models of the the activist-thinker discover one in its pages. We need to remember how influential First Things became, for example; it helped fund the policies of the nucleus of global power, the American presidency (360–62). Though we know from the history of ideas such intellectual investment can pay off immensely, we sometimes forget how high the stakes are. Neuhaus calls us back to the fray, back to intellectual engagement, back to confessional activism.

The man was not perfect, of course, and neither is this biography. The chapter titles run a bit effusive (e.g., “A Jackrabbit-Shooting Cisco Kid Turns Arbiter Elegentarium”), and Boyagoda shows little love lost for the doctrinally conservative Lutherans Neuhaus fought at Concordia (74–76). Sometimes one wishes for more discussion of major matters like the molestation scandals, or the Neuhaus-Buckley interaction.

These are mostly quibbles, though. Boyagoda takes the measure of a man whose career defies easy characterization. He succeeds in his task. In doing so, he helps the different elements of his readership—including gospel-centered evangelicals—find in Neuhaus the workings of a model of the thinking life. Neuhaus’s program shows us the value of deep thinking and persuasive communication. In a cut-flower civilization, he saw that one first had to revive the lily. Only then could one gild it.

Richard John Neuhaus presents us with a quirky, sometimes difficult, but unflinchingly courageous man. We need this example, and others. Many Christians of varying vocations—pastoral, political, and philosophical among them—may feel isolated when they stand in the public square on behalf of the permanent things. If this is the case, they can know that in terms of historical precedent, but far more in terms of Christic union, they may be momentarily lonely, but are never alone.