Jesus Christ receives the greatest, most exquisite titles in Scripture, and he deserves the utmost honor, affection, and adoration of every human heart. In Rejoicing in Christ, Michael Reeves, professor at Wales Evangelical School of Theology, spurs believers to delight themselves in the God-man. His theme is that Christianity is neither a dated set of abstract doctrines nor a cultural movement of morality. It revolves around a person. As he says, “The center, the cornerstone, the jewel in the crown of Christianity is not an idea, a system or a thing: it is not even ‘the gospel’ as such. It is Jesus Christ” (10).

For believers, this isn’t a new idea. Reeves isn’t angling for a revolutionary theology—he simply wants us to celebrate the one in whom all theology delights.

If that’s the case, why read Rejoicing in Christ? Its title is plain and uncontroversial, and what Bible-believing Christian would say they don’t rejoice in Christ? One might even assume that this book is just another remix of the (now wonderfully widespread) “glorify-God-by-delighting-in-him” message you’ll find in countless other books. Also, and I mean this seriously, the book’s cover is . . . odd. Abstract splotches of bright color catch the eye but conceal the actual nature of the book’s contents. The old adage about book covers just might compel you to leave Rejoicing in Christ on the shelf. 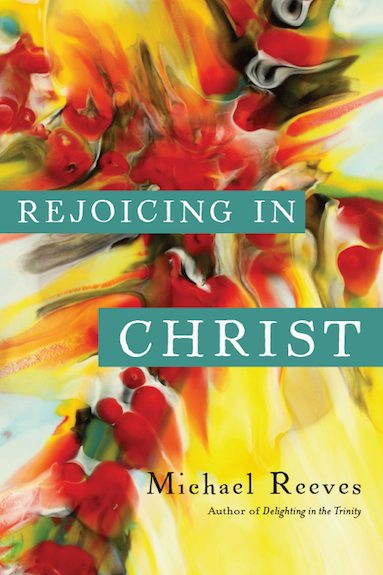 But I hope you won’t do that. In fact, you should add Rejoicing in Christ to the top of your summer reading list. Nothing is more central to our faith, lives, and churches than Jesus, but we often forget, ignore, and overlook the glories of Christ. We become so familiar with his identity and work that other things easily grab our attention. Rejoicing in Christ diagnoses our spiritual amnesia and provides the antidote—a vision of Jesus that delights, inspires, captivates, and intrigues.

Rejoicing in Christ is unique among Christian books. It successfully navigates familiar waters like the person and work of Christ while illuminating them with fascinating insights. As a result, we encounter the magnetism and gravity of Christ with new vitality.

Reeves’s approach helps accomplish this. He frames the book with standard theological categories, but uncovers gems in the rich soil of the biblical storyline and connects them to Christ. He summarizes the highlights and heresies of historical thinking on Jesus with distinct clarity and concision. He also nestles pithy summaries among crisp illustrations. Reeves even examines a vibrant assortment of paintings from throughout the centuries that reflect the glories and mysteries of Christ. In other words, Rejoicing in Christ is an extended meditation. It’s a devotional in the best sense of the word, for it describes, reveres, and celebrates the great object of Christian affection, namely, Christ himself.

A couple of examples will show Reeves’s skill for provoking fresh appreciation for Jesus.

First, consider that “all things were created through him and for him” (Col. 1:16). We easily conceive of Christ as Savior, but we need help remembering he’s the agent of creation too. As both creator and redeemer, Christ’s work is unified. He does not save us out of this world, as if we mostly needed liberation from the physical realm. Rather, his work includes the redemption of this world. Christ’s incarnation “was, as it were, the first day of a new week of creation, the Word going out once again to bring light into darkness, to create life, to recover what was his” (35).

Second, Reeves considers why it matters that Arius got it wrong. The fourth-century heretic insisted Jesus was a created being, not the eternal Son of God. Is this just a bit of brainy theological sparring? Far from it. The very nature of God is at stake. When the church fathers rightly described Christ as “of one being” with the Father, they were highlighting the loving unity between the Father and Son in the work of redemption. As Reeves says:

God isn’t using him as hired help, and he isn’t using God to get heavenly glory. He has always been at the Father’s side. He is the eternally beloved, the one who shows that there is a most loving Father in heaven, the one who can share with us more than a business understanding with God: Sonship! (21)

Not only is Reeves’ meditation on Christ glorious, but it’s timely. Rejoicing in Christ is a welcome contribution to the evangelical landscape today for two reasons.

First, the “gospel focused” movement within evangelicalism needs to preserve a tenacious focus on Jesus Christ. That should go without saying, but we’re always at risk of treating the gospel more as a label of orthodoxy or badge of identity than as an announcement about the God-man who redeems and reigns. It’s so easy to use “gospel-centered” or even “Christ-centered” language to validate a book, author, church, or website, yet forget that the glory and hope of the gospel is Jesus himself. As we strive to oppose legalism, moralism, prosperity theology, theological liberalism, and a host of other false gospels, let us never equate “the gospel” with “our camp” or “being right.” And let us always remember that as wonderful as concepts like grace, justification, and adoption are, they’re only truly glorious in their relation to Christ. Reeves is right: “What is the point of being forgiven and justified? Not simply that we might stand forgiven and righteous in heaven. We are forgiven in order to know and enjoy Christ. Knowing him is the only true life” (121).

Second, as evangelicalism in the West increasingly adopts the prophetic posture of a minority movement, we must remember that Christ defines us more fundamentally than our ethics. True, our ethical convictions flow from Christ. But they are not our identity. Jesus is. As concerned as we should be with matters of sexual morality and religious liberty, Reeves’s attention to our union with Christ is so refreshing. When we look at the world, it’s tempting to interpret society’s rejection of Christian ideals as disaster for our future. We will despair if our identity is in the world’s approval. Thankfully, believers can rest in the reality that their “life is hidden with Christ in God” (Col. 3:3). Jesus defines us infinitely more than the battles we fight. As Reeves exults, “We are united to the Son so we can enter into his life. Our joy, our prayers, our mission, our holiness, our suffering, our hope: all are a participation in the life of the Son” (93).

Every Reason to Rejoice

This moment in history is just that—a moment. But our identity as believers is rooted in something—someone—who transcends this age. Jesus has ushered in the age to come. We stand firm in him, even as we suffer with him. He has already endured the ultimate suffering for our sake. And so, we have every reason to rejoice in him.

Matt Merker serves as an elder and pastoral assistant at Capitol Hill Baptist Church in Washington, D.C. He writes congregational hymns, including “He Will Hold Me Fast.” He lives on Capitol Hill with his wife and their two children. You can follow him on Twitter.

2 Serving Christ When Everyone Needs You

3 Discounted Books at TGC21 (In Person and Online)

4 20 Quotes from Jen Wilkin on the Ten Commandments

What’s the Earliest Evidence for Christianity? (The Answer May Surprise You)