“If the church is ever going to summon the courage to transgress these walls of hostility,” David Leong writes in his new book, Race & Place: How Urban Geography Shapes the Journey to Reconciliation, “then we must understand the walls we’re up against.”

Leong—associate professor of missiology at Seattle Pacific University—gives equal attention to the visible and invisible walls that separate communities and stand between our ideas of reconciliation and their realization.

We have to understand these walls, Leong argues, before we’ll ever find the courage to transgress them.

Speaking of walls, did you know there’s a concrete wall along Detroit’s famed 8 Mile Road? It’s a half-mile long, six feet tall, and one foot thick. It was built in 1940 so developers could separate the predominately black neighborhoods to the south from suburbs they hoped to build in the north in an effort to attract middle-class white families eligible for FHA loans.

Leong explains how the neighborhoods to the south of 8 Mile were “redlined” on maps maintained by the federally run Home Owners’ Loan Corporation. Those living in redlined areas were denied access to 30-year mortgage loans. The green areas, like the suburbs built to the north of 8 Mile, were granted FHA loans.

The “entry-level pricing with payment plans spaced over 30 years” was an “ingenious move on the part of the government to stimulate jobs, spending, and growth.” That worked out well for the predominately white recipients. The end result was generational wealth and progress. Live in your home 30 years, make your monthly payments, and you have a substantive investment to pass along to your children.

Not so for those in redlined districts.

Ignorance Is Only Bliss to the Privileged

Race & Place provides an introduction to issues that many of us would prefer to ignore. It’s easier to think where we live is incidental to who we are, and, at most, has only peripheral implications for our gospel practice. After all, we aren’t the ones who built the wall along 8 Mile Road.

It’s easier to think where we live is incidental to who we are, and, at most, has only peripheral implications for our gospel practice.

But the wall is still standing in Detroit: literally and figuratively. The current population south of the wall is 90 percent black, and to the north 80 percent white. Things haven’t changed all that much.

How should Christians who care about racial reconciliation think about such things? While Race & Place isn’t long on application, it offers compelling arguments to expose and understand the walls we’re up against—in order that we might “summon the courage” to transgress them. This helpful book takes square aim at evangelical neutrality and ignorance.

While ignorance might be bliss for the privileged suburbs on the north side of 8 Mile Road, there’s a different history and a different set of realities on the other side. Leong insists our talk of reconciliation rings hollow if it doesn’t “account for the systemic, structural, or social causes of racism or racial inequality.”

In short, our discussion of race must include place.

Fleeing From and Fleeing To

Among the many helpful socio-cultural observations Leong makes, I found his explanation of the two kinds of flight extremely helpful. Leong places both the earlier white exodus followed years later by the hipster invasion as similar forms of flight that limit the flourishing of many who have long called city centers home.

“Just as their parents’ generation had fled the city to create suburbia,” Leong explains, “they were now fleeing from their distaste for the blandness of Pleasantville.” The first generation left for the suburbs and took with them “their tax base, social capital, and direct investment and very little was left behind.” Their offspring have returned bringing the gift of upscale boutiques, high-end restaurants, and increased living expenses for those who never left the city.

Our discussion of race must include place.

It could be argued that one generation took resources the city needed, and the next generation brought things for which the city never asked. Leong argues that both have cost those living in the city—those who never left—a great deal. Leong’s book is valuable because it forces us to face realities like these in our conversations about racial justice and reconciliation.

Leong organizes his content under three main sections: (1) Race and Place: Beginning the Journey, (2) Patterns of Exclusion: Structures that Divide, and (3) Communities of Belonging. I found the first two parts the most informative and helpful. The final section is the shortest, with attention given to reflection and application. 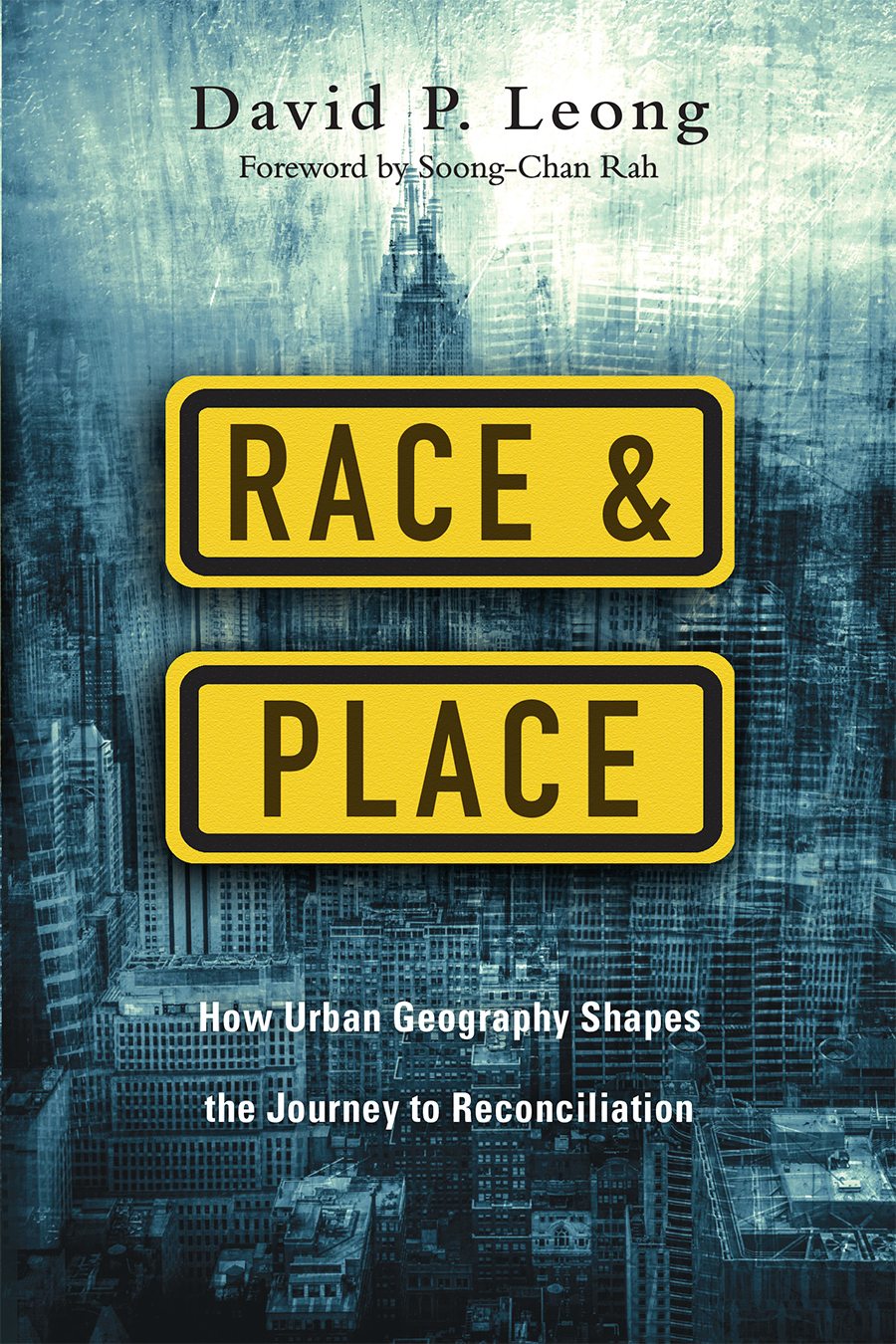 Race & Place: How Urban Geography Shapes the Journey to Reconciliation

Race & Place: How Urban Geography Shapes the Journey to Reconciliation

We long for diverse, thriving neighborhoods and churches, yet racial injustices persist. Why? Because geographic structures and systems create barriers to reconciliation and prevent the flourishing of our communities.

Race and Place reveals the profound ways in which these geographic forces and structures sustain the divisions among us. Urban missiologist David Leong, who resides in one of the most diverse neighborhoods in the country, unpacks the systemic challenges that are rarely addressed in the conversation about racial justice.

The evening news may deliver story after story that causes us to despair. But Leong envisions a future of belonging and hope in our streets, towns, cities, and churches. A discussion about race needs to go hand in hand with a discussion about place. This book is a welcome addition to a conversation that needs to include both.

Leong’s brevity in application might be explained in this statement: “A deep reading of both the Scriptures and the city is essential to understanding the signs of the times.” Rather than offering a detailed reconciliation strategy, he is primarily concerned with Christians taking the initial step of opening our eyes to what is in God’s Word and what is in and around the city that divides God’s people. Leong is striking at what he describes as the default evangelical posture of “soft tolerance, naïve post-racialism, unintentional tokenism, or some combination of the three.”

Leong points us to the life of Jesus, whose incarnation reveals that though he embodied the ethnicity of a Middle Eastern man, he nonetheless transcended ethnic, gender, and socio-economic barriers to offer good news. And he calls his followers to do the same. Unless we are willing to transgress the walls that were built to divide—unless we’re willing to talk honestly about race and place—our appeals to reconciliation will likely be little more than a noisy gong or a clanging cymbal. Leong is right: “We can’t sow homogenous exclusion and then expect to reap diverse belonging.”

I enthusiastically recommend this book. Read it to be informed, but don’t stop there. Together let’s summon the courage to transgress the walls of hostility that obstruct our witness.

I think a good place to begin is with three simple words: think, listen, and pray. We must think deeply about place, and stop seeing it as a neutral and insignificant factor in race relations. We can’t ignore these walls any longer. To do this we must listen to others and learn about the walls—intentional and unintentional, visible and invisible—that separate us. And if these walls are ever to be breached, we must pray for strength, courage, patience, resolve, and wisdom to begin a journey directed toward change.

It will be a journey. Like any journey, it must start somewhere and go somewhere. Understanding those places—where we begin and where we will go—is of gospel significance. As Leong explains, along the way we’ll learn to be guests and not just hosts. And in so doing, perhaps we won’t merely bloom where we’re planted but plant where we wish to bloom.

Editors’ note: Racial unity is a gospel issue and all the more urgent 50 years after Martin Luther King Jr.’s death. Join the ERLC and The Gospel Coalition at a special event, “MLK50: Gospel Reflections from the Mountaintop,” taking place April 4, 2018, in Memphis, Tennessee. Register now: MLK50conference.com