Like many people, I enjoy documentaries. Producers spend significant amounts of time investigating a topic, analyzing it, interpreting it, and then providing a way forward. The best documentaries are those that help you better understand—even feel—the tension in and burden for the subject. In his latest book The Prodigal Church: A Gentle Manifesto Against the Status Quo, Jared C. Wilson gives us something of a documentary on the contemporary evangelical church, particularly those who carry the enduring scent of the church-growth movement by means of attractional ministry.

Wilson, director of content strategy for Midwestern Baptist Theological Seminary and managing editor of For the Church, is not an outsider to this topic. Serving as a pastor for a number of years in churches thoroughly committed to the newest and seemingly best ways to do church, he has what you may call “pew-cred” when discussing the attractional church. In The Prodigal Church he simply asks Christians, particularly pastors and church leaders, to reexamine what we do and why we do it. In this way, the manifesto is something of a diagnostic for churches that provides a simple, clear, and actionable plan for biblical reform.

In the introduction, Wilson works hard to ensure he’s not unduly offending anyone. With a title that has the word “manifesto” and this much apology in the opening, I was prepared for a scrappy book with a lot of ecclesiastical “elbows” being thrown. This is not the case. The Prodigal Church is well researched, gracious, pastoral, and pleasantly serene. The only people this book would irritate are those who would say, “Don’t confuse me with the facts; I know what I believe.” Even those who might disagree with Wilson should find the tone courteous, the critique fair, and the action plan biblical.

In this manifesto, Wilson makes an observation about what has become mainstream within evangelicalism. It was formerly referred to as the church growth movement and now is broadly grouped in the category of the attractional church. This ministry sees itself with the priority of reaching people. This of course is not bad. In fact, it’s to be applauded. However, the observation is that too many churches have the wrong reference point when doing ministry. Instead of starting with what would appear to be the obvious question, “What does God’s Word say?” many innovative, attractional churches start by asking, “What works?” 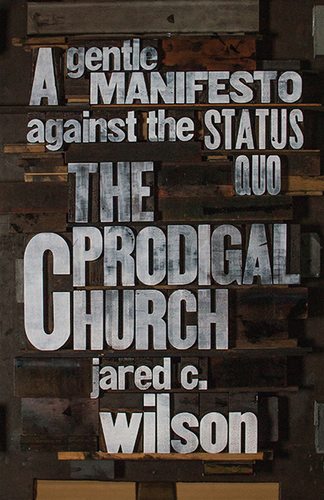 The Prodigal Church: A Gentle Manifesto Against the Status Quo

The Prodigal Church: A Gentle Manifesto Against the Status Quo

Wilson concedes that the Bible is somewhat vague about exactly how to “do church.” But he also observes that just because we can do something doesn’t mean we should. He notes:

I think the evangelical church in the West is particularly susceptible to two primary ideologies that drive many of its ways of doing church today, and I think the attractional model is fundamentally built on these functional ideologies. These ideologies are pragmatism and consumerism. (47)

Pragmatism, says Wilson, isn’t the same thing as being practical. It’s about doing what works: “Pragmatism has a utilitarian ethos to it. It is by nature unspiritual. It has no room for discernment in it . . . (and) it has essentially become the water that evangelical ministry swims in” (48).

Ministry is oriented around what seems to work. How do we know what works? Walking through some of the philosophies of leading church growth experts, Wilson demonstrates that much of this ministry is built on the business practices of corporate America. If the customer is the guy not yet in the pew and the customer is always right, then it’s not hard to see that in the attractional church the proverbial tail is wagging the dog.

In a bustling, busy evangelical church committed to “reaching people,” it’s tough to see through the dust of activity and ask the important questions. If you do ask them, people might think you’re strangely opposed to the church’s mission. Wilson, having himself breathed in the dust storm of attractional activity, perceptively poses a couple: “What if the customer isn’t actually right?” and “What if it’s not actually working?”

Wilson culls from numerous studies on trends in evangelicalism to demonstrate that what many think is so successful is actually mythical:

It turns out that while megachurches are flourishing, America has suffered an actual net loss of churchgoers since the rise of the seeker/attractional movement.

This means that the seeker/attractional movement has not succeeded. It meant to get lost persons in the doors and make them “fully devoted followers of Christ,” and in the fifteen years or so of their model’s predominance, American churches are actually less full across the board.

Instead of conversion growth we see transfer growth. Perhaps, to use Wilson’s paradigm, it’s consumer growth.

Prescribing the Path Ahead

At this point we may mistakenly take The Prodigal Church as something of a jeremiad against the church. But after pointing out the cracks in the attractional church’s foundation, Wilson prescribes a path ahead. This path is neither novel nor innovative; it is the simple yet powerfully proven path of Scripture and church history. In this explanation, he makes an important observation many need to hear: “You can’t program discipleship because Christianity is supernatural.”

Here he cautions churches away from the “church-in-a-box,” “just add water” approach to ministry, showing that it’s far more complex, messy, and “New Testamenty” than that. Recalling firsthand stories of seeing the gospel bloom in unsuspecting soil, Wilson reminds us that God causes the growth. He points us back to the powerful gospel, the sufficient Word, the beauty of the church gathered, and the testimony of true gospel community. It’s so simple that it’s refreshing and liberating. I was reminded that this is exactly what the gospel does—it liberates and refreshes.

In the final chapter Wilson hops into the documentary and shares a very personal story. He talks about how he was enslaved to sin and almost destroyed his marriage and family. Through a number of very painful years he came to a place of utter desperation. It was then and there that the truth and beauty of the gospel became clear. Truly knowing he was accepted before God changed everything. He was actually loved. In the depths of the slough of despond Wilson realized his greatest need was the good news:

When my own life fell apart, I had a notebook full of sermon outlines overflowing with helpful tips and practical steps for becoming more victorious, happy, and successful. Not a single one worked. Only the grace of God was powerful enough to save me. I urge you not to deny your people their only help. They are inwardly (and some outwardly) crying out for help, for rescue, for redemption, for salvation. Don’t throw them the anchor of the law. Only the gospel works. (217)

If our goal is to truly glorify God by “helping” people, then we need to hear Wilson’s gentle manifesto. The Prodigal Church calls us back to the whiteboard to ask, “What does the Bible say we are supposed to be doing again?”

This is the work of a friend who cares.