John Barclay, professor of divinity at Durham University in England, has written a sizable contribution to New Testament studies in Paul and the Gift. His basic thesis is that gift is the proper first-century category for comprehending Paul’s term grace (2). His primary focus is examining the divine gift giving, which for the apostle Paul is God’s gift of Christ (4).

First, grace is a multifaceted concept that theologians frequently use but seldom define. Some stress the incongruity of grace (giving to an unworthy recipient); others the efficacy of grace. Barclay points out that these different “perfections” of grace (conceptual extensions) aren’t better or worse interpretations of the concept, just different aspects of it (6). He identifies six possible perfections of grace (70–75, 563):

Second, ever since E. P. Sanders published Paul and Palestinian Judaism, many New Testament scholars have been careful to emphasize that Second Temple Judaism was a religion of grace. The problem with Sanders’s thesis, however, is that Second Temple conceptions of grace weren’t uniform, which undermines claims that Paul’s views were either similar or dissimilar to first-century views (6).

Third, though Paul regularly highlights the incongruous aspect of grace—that God gives the Christ-gift without regard to the worth of the recipient (6)—Barclay argues against the idea that incongruity automatically eliminates all forms of reciprocity. He claims the concept of unconditional gift-giving—a no-strings-attached concept—germinates with Luther and fully flowers with Immanuel Kant but is anachronistic to Paul’s first-century context (e.g., 11, 44, 50–51, 63, 115, 185). In his judgment, Paul knows nothing of a “pure” gift (52, 64). 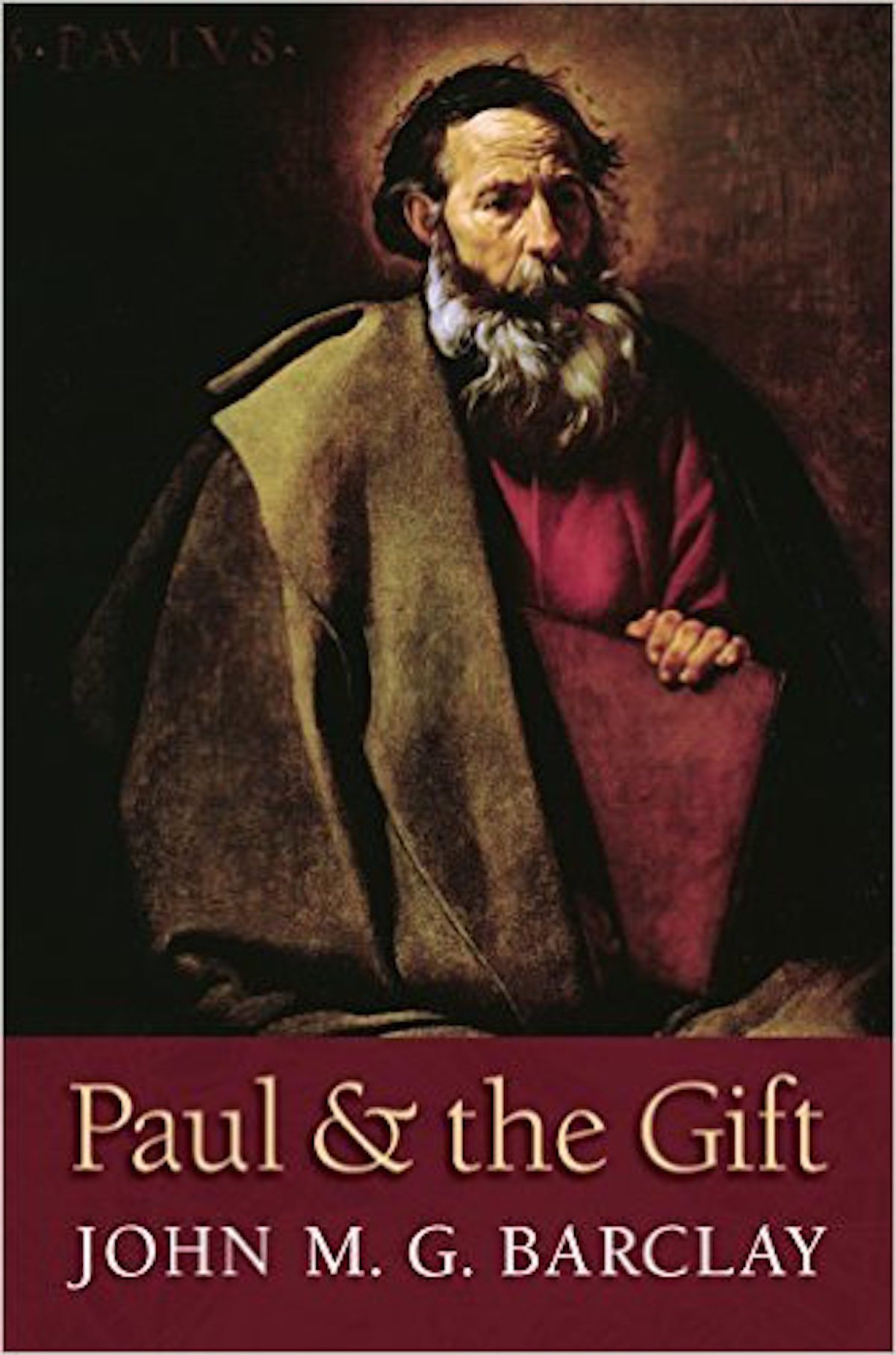 Paul and the Gift

Paul and the Gift

A brief review cannot offer adequate in-depth analysis of Barclay’s significant contribution. His background research is detailed, covering first-century concepts of gift giving and the development in post-Enlightenment thought (11–330). And in an encouraging move, Barclay also explores the views of 16th-century Reformers, such as Luther and Calvin (97–129)—something few New Perspective scholars have taken the time to do. Barclay also seeks to prove his thesis with detailed exegesis of key texts from Galatians and Romans (331–574). Readers possess meticulously gathered information and carefully crafted arguments for consideration.

Positive elements aside, I offer the following three observations in the interest of contributing to what’ll likely be an ongoing discussion in New Testament scholarship and the broader academy.

First, I appreciate Barclay’s efforts to engage Old Perspective representatives such as Luther and Calvin. Yet I have doubts about some of his historical-theological conclusions. For example, Barclay lays blame at Luther’s feet for supposedly introducing the idea of an altruistic gift, which contributed to the modern ideal of the pure gift (115). But was Luther’s insight really that novel or unique, or was it influenced by his classically informed education and earlier Aristotelian concepts of altruism? Such lines of influence would undermine the claim that concepts of the “pure” gift have Kantian origins. Another inaccuracy is Barclay’s claim that Calvin developed the third use of the law, the normative use, which is “quite alien to Lutheran discourse” (125). Barclay makes this claim to prove there’s some cleavage between Luther and Calvin and their respective concepts of grace, yet recent research has demonstrated Calvin gleaned the concept of the third use of the law from Lutheran Philip Melanchthon and that Luther substantively held the same view. (On Luther’s understanding of the normative use of the law, consult Edward A. Engelbrecht’s Friends of the Law: Luther’s Use of the Law for the Christian Life.)

Second, while Barclay claims to move beyond the New Perspective on Paul, it seems he’s replaced one first-century paradigm for another. Second Temple literature is no longer the lens through which to view Paul; first-century gift giving is. For example, much ink has been spilled over the meaning of Paul’s phrase “works of the law.” According to some New Perspective scholars, “works of the law” refer to Sabbath observance, food laws, and circumcision—those things that identified Jews. According to the Old Perspective, “works of the law” represents the Judaizers’ attempt to secure salvation through moral effort. Barclay disagrees; the Judaizers were neither focused on these identity markers (ala the New Perspective) nor seeking to trust in their own good works (ala the Old Perspective) but rather erroneously believed the Torah was “the authoritative cultural frame of the good news” (374; cf. 444). He argues God views people as “righteous” because “faith in Christ is the expression of a life derived from the Christ-event . . . the Christ-event has become the ground of their being” (379). This means the chief error of the Judaizers was trying to confine the gift of Christ within the Torah, “within pre-established systems of worth” (391). The Judaizers wanted to evaluate Christ according to Jewish tradition and “the values of Jewish ethnicity and Torah” (392). Yet if this was the true nature of the Galatian problem, why does Paul push behind the Torah and engage the Abrahamic narratives to contrast Sarah, Hagar, and their respective children (Gal. 4:21–31) (cf. 416–17)? And why does Paul set forth Abraham as the paradigmatic New Testament believer (Rom. 4:1ff)? Paul repeatedly argues that works-righteousness is the problem, not “pre-established systems of worth.” In my judgment, the apostle’s use of the Abrahamic narratives underlies his theological juxtaposition of faith and works in justification, which is an Old Perspective claim Barclay wrongly dismisses (406 n. 40).

Third, Barclay employs his concept of the gift to make room for a proper understanding of reciprocity. He acknowledges redemption in Christ is an incongruous gift, but its incongruity shouldn’t eliminate reciprocity. In the first-century understanding of gift giving, some form of reciprocity was the norm. Barclay employs this concept in his soteriology: “Paul makes it clear that faith also involves action ([Gal.] 5:6), arising from and made possible by the Christ-gift (2:20), and that in such action eternal life remains at stake (5:21; 6:8)” (406 n. 40). A person can also lose the Christ-gift: “Since the warnings [Gal. 5:21; 6:8] are directed to the believing community, it is clearly possible to lose all the benefits of the Christ-gift.” The incongruous gift of Christ is supposed to elicit congruity in the lives of its recipients (440). As critical as Barclay is of Sanders’s covenantal nomism (in by grace, stay by covenant faithfulness), how does this new gift paradigm truly differ? For all of his claims to move past the Old Perspective on Paul and the Augustine-Pelagius debate, this looks very much like classic Roman Catholic semi-Pelagian soteriology. With Barclay, Rome would affirm the incongruity and priority of grace, and would agree that Paul doesn’t perfect the efficacy of grace. And they would agree that grace is not unconditional (446).

I’ve only briefly touched on three observations concerning Barclay’s historical-theological claims and elements of his analysis of Galatians. I have many other similar concerns regarding his analysis of Romans. Related to this are his historical-critical assumptions about the Pauline corpus. Barclay presumably believes only the so-called “undisputed letters” are genuinely Pauline; Ephesians and Titus are therefore sidelined as “the subsequent Pauline tradition.” Still, he claims texts such as Ephesians 2:8–10 and Titus 3:4–6 don’t misinterpret Paul’s “generalized statements that ‘works’ are irrelevant for the operation of grace” (546 n. 57). The fact is, however, that these are just some of the key texts to which Old Perspective theologians appeal to claim justification is free and therefore unconditional. While Barclay doubtless had to limit the scope of his arguments and evidence, to not offer significant historical and exegetical engagement with such texts will leave doubts in many readers’ minds.

Methodologically, I have significant misgivings that one single concept (gift) and one term (grace) can serve as the Archimedean point that shifts the reading of the entire New Testament. Philosophically, this type of claim has more in common with Enlightenment-influenced thought—namely, that systems of thought can be reduced to a single principle or concept. Such a methodology is at odds with Old Perspective approaches that don’t look for one concept but rather recognize the many varied concepts that inform a holistic reading of the Scriptures—not just one portion such as the New Testament or a truncated Pauline corpus. In other words, can one’s concept of gift alone spark a theological tectonic shift? What about other scriptural concepts like redemption, propitiation, deliverance from curse, adoption, and especially election?

I certainly appreciate Barclay’s titanic effort, and I suspect scholars will wade into the ocean of first-century literature on gift giving to confirm, challenge, or modify elements of Barclay’s claims. I welcome Barclay’s work since it casts light on the world of the New Testament that can help pastors and academics refine their exegesis and understanding of grace. Nonetheless, I remain unpersuaded that Barclay has presented a conclusive case that’s moved the discussion beyond the Old and New Perspectives. I remain an unrepentant adherent to the Old Perspective (and classic Protestant Reformation) reading of the Scriptures.

J. V. Fesko is academic dean and professor of systematic and historical theology at Westminster Seminary California in Escondido, California.