The media narrative has been established: the Religious Right, which has defined evangelicalism’s public witness since the early 1980s, is slowly being replaced by a younger generation of evangelicals that are less politically oriented, more focused on social justice, and more concerned with creating culture than critiquing it.

Gabe Lyons, the founder of Q Ideas and the co-author of unChristian, has become the standard bearer for this younger generation of Christians. His book The Next Christians: Seven Ways You Can Live the Gospel and Restore the World serves as his public notice that younger evangelicals are “restoring confidence in their faith and turning ‘Christian’ into a label worthy of the one who has called them to restore.”

Unfortunately, the next Christians do not seem interested (yet) in restoring their relationship with their parents’ generation. The Next Christians’ overly self-congratulatory tone reinforces the unfortunate narrative that we younger folks are the only ones who “get it.” Lyons admits he’s amplifying the positives of this generation’s potential but makes no such qualification to his sour bent towards the previous. 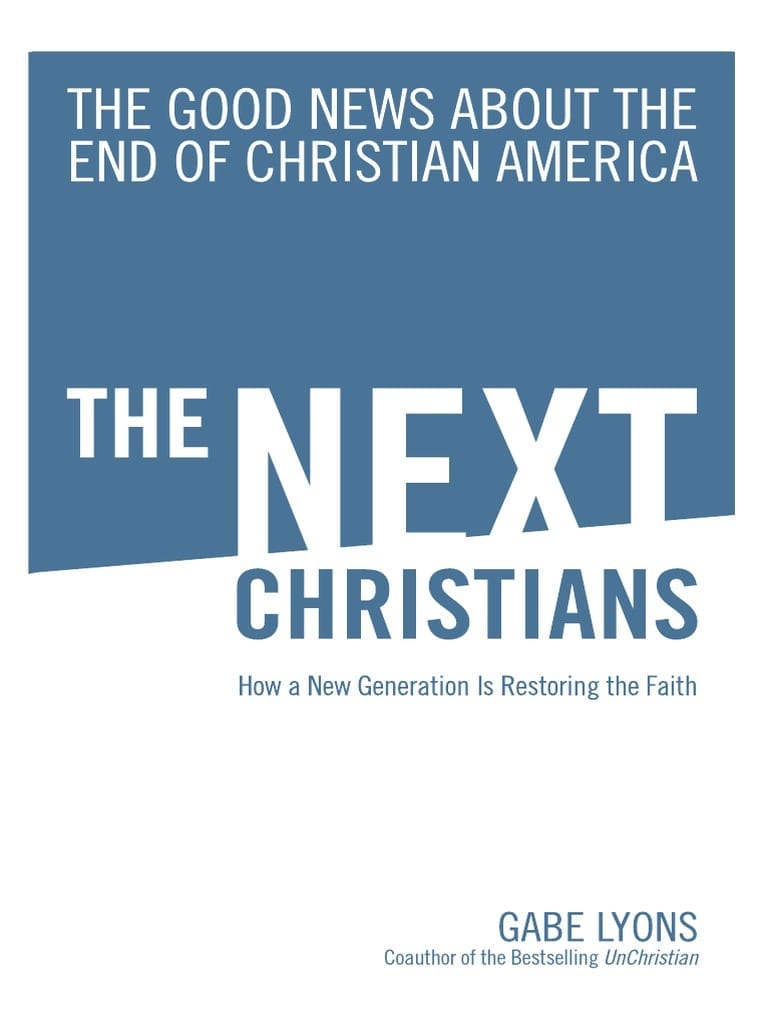 The Next Christians: Seven Ways You Can Live the Gospel and Restore the World

The Next Christians: Seven Ways You Can Live the Gospel and Restore the World

Gabe Lyons is optimistic that Christianity’s best days are yet to come. His best-selling book, UnChristian, revealed the pervasiveness of culture’s growing disregard for Christians. Now, in The Next Christians, Lyons shows how a new wave of believers are turning the tide by bringing the truth of the Gospel to bear on our changing, secular society.

We can understand why Lyons adopts this contentious narrative, given that he wrote the book that cemented it in everyone’s minds (for the alternative to unChristian, see Bradley Wright’s excellent Christians are Hate-Filled Hypocrites and Ten Other Lies You’ve Been Told about the Church). Yet the narrative leads Lyons into methodological paradoxes and confusions that undermine what might otherwise be an encouraging exposition of the emphases that make younger Christians unique in the religious landscape.

Lyons is convinced that “the death of yesterday becomes the birth of a great tomorrow, and the end of an era becomes a beautiful new beginning.” He may see the dawn coming, but Lyons gives us little reason beyond the work his friends are doing that it will break during our lifetime. What’s more, the statistics Lyons deploys make it difficult to share his hope. As he points out, most of the generation he calls “the next Christians” will leave the faith after high school. Christianity in America may be “entering a time of transformation on par with the Protestant Reformation,” but there may only be a remnant left to enjoy the fruits.

My critique is not that Lyons steps outside of statistics. The numbers never tell the whole story, and Lyons acknowledges that the next Christians are “bubbling just underneath the surface.” But the narrative of the decline of “Christian America” and the rise of the next Christians begs for further analysis. For instance, given that so many young people leave the faith, where did most of these “next Christians” come from? Christian Smith points out in Soul Searching that parents are “hugely important” in the formation of faith among 18-23 year olds. This research suggests that the next Christians have been raised by some pretty solid parents. If we are on the cusp of Lyons’ revolution, we may have mom and dad to thank.

Theologically, Lyons argues (briefly) that the next Christians are demarcated by an expansive understanding of the gospel to include the doctrines of creation and restoration. As Lyons puts it, “The next Christians believe that Christ’s death and Resurrection were not only meant to save people from something. He wanted to save Christians to something.” And that “something” is “partnering with God to breathe justice and mercy and peace and compassion and generosity into the world.” As Lyons puts it, “Christ’s redemption is not the end or even the goal of our stories; redemption is the beginning of our participation in God’s work of restoration in our lives and in the world.”

This expansive understanding of the gospel may make some readers nervous. Lyons is unambiguous and insistent that Christians keep this gospel at the center of their lives and practice. In one of his clearest and best sections, he channels C. S. Lewis’s distinction between first things and second things to argue, “The first thing for the Christian is to recover the gospel-to relearn and fall in love again with that historic, beautiful, redemptive, faithful, demanding, reconciling, all-powerful, atoning, grace-abounding, soul-quenching, spiritually fulfilling good news of God’s love.”

The [way things ought to be] is the prism through which [the next Christians] see their mission. This includes sharing the gospel so that men and women might enter into relationship with God, but it also goes beyond that. In the good garden there was no sickness or evil or pain. So these Christians set out to identify hurts, sickness, darkness, and evil, and then show up as a force of help, healing, and goodness. They have purposed to loose the strings of brokenness and set free God’s intention.

Lyons later affirms John Stott’s suggestion that evangelism and social action are partners, and that neither takes precedence. But as faithful Christians, we must insist that restoring “the way things ought to be” is not the motivating impulse. To frame our witness to the world around our response to its brokenness misses the theocentric nature of the kingdom of God: “Let your light so shine before men,” Jesus tells us in Matthew, “that they may glorify your father in heaven.”

While we might wish for more precision in his method and clarity in his exegesis, The Next Christians is still important as an example of the ethos that makes young evangelicals fascinating to so many observers. It is a handy reference for understanding the narratives that motivate younger Christians, and the ambiguities that we thrive on. For all the differences between the generations, the “next Christians” Lyons describes are simply Christians, making a muck of things and trusting that by the mercy of God in Jesus Christ “the people of God will continue forward as they’ve been doing for two millennia so long as we keep the foundations of our faith grounded in the gospel of Jesus Christ.”