John Newton is remembered today as the author of the hymn “Amazing Grace” and as a dramatically converted slave-trader who later supported the cause of abolition. But he was known in the 18th century, and after, as one of the leading evangelical pastors of his generation in England, and above all as a pastoral letter-writer. Everyone seemed to write to him for advice. By the end of his life he was always working from a stack of 60 or so unanswered letters.

Tony Reinke has immersed himself in these letters in order to make Newton’s valuable teaching on the Christian life available to another generation in Newton on the Christian Life: To Live Is Christ.

Windows on the Soul

Reinke did well to focus on the letters. The 18th century was one of the great times for letter writing. As literacy spread and postal service improved (in fact, you could receive a letter in England more quickly back then than you can now), more and more people confided their thoughts to each other by pen and paper, and the genre of the familiar letter became established as one important form of friendship. But, unlike today, in most cases the recipient paid the postage, so letters were always about something. Few letters just said, “Hey, what’s up?” 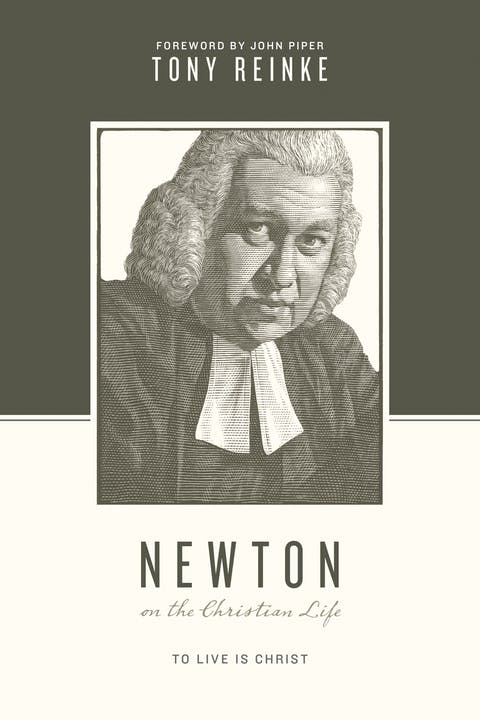 Newton on the Christian Life: To Live Is Christ

Newton on the Christian Life: To Live Is Christ

The conditions were therefore just about perfect for a tradition of spiritual counsel through letters. The letter is deeply personal. Unlike the abstract objectivity of the essay, where the writer and reader seem both to disappear, or the private subjectivity of the diary, where the writer and reader are the same person, the familiar letter is genuinely interpersonal. There is content to be discussed, but personally, in a quarto sheet folded once to make four pages. It is like a really good conversation, with an added spaciousness for contemplation and quiet reflection. Could there be a better genre for pastoral care and spiritual friendship? John Wesley picked up on a classical metaphor when he called the letter a “window on the soul.”

The Anglican pastor John Newton provided perhaps the finest example of spiritual letter writing among the many evangelical correspondents of the period. However, because letters are by nature ad hoc compositions, even a large collection of pastoral letters such as Newton’s does not present its teaching systematically like Calvin’s Institutes. Yet by reading them over and over again, as Reinke has done, you begin to recognize certain themes and to see an outline of teaching.

Reinke shows that the center for Newton’s vision of the Christian life in all these letters is the believer’s union with Christ (e.g., 47, 55, 68). According to Newton, maturity involves a deeper and deeper appreciation for, and dependence upon the sufficiency of Christ for overcoming the intractable nature of sin and the painful experience of personal trials. This Christ-centeredness meant that though Newton’s spirituality was deeply concerned with experience, it was oriented away from spiritual self-preoccupation toward contemplating Christ—looking unto Jesus.

Newton’s focus upon contemplation was one of the emphases that first attracted me to him. He is thoroughly Reformed, evangelical, and biblical in his theology, and he is no mere rationalist head-on-a-stick. These letters deal with real experience and hold out hope of real progress in the Christian life. Ultimately he teaches that the goal of the Christian life is to behold the face of God in Christ in humility and wonder. Contemplation is not for Newton a boutique spirituality or a “Catholic thing.” It is the basic Christian life and the way of maturity.

Reinke’s excellent chapter about Newton on reading Scripture (ch. 10) is parallel in many ways to Robert Wilken’s account of the reading of Scripture among the church fathers. Augustine regarded the Bible as nothing less than “the face of God for now,” because by gazing into the Scriptures with an attitude of prayer and devotion we encounter the living God as we await the fullness of vision in the life to come. This is the spirit and manner in which Newton sought for Christ in all the Scriptures. There is much here in Newton to reconcile the “text critical” and “theological interpretation” schools of Bible scholarship today.

Reinke does an excellent job tracing Newton’s counsel on spiritual discipline (ch. 3), singleness of heart (ch. 4), sin and temptation (ch. 5), suffering (ch. 9), weariness (ch. 12), and other classic themes. Newton was far from dry on these topics. He had a knack for pithy expressions and the well-chosen anecdote. Reinke has an eye for this creativity and captures Newton’s wit and wisdom. One of my favorite examples—one that Reinke notes (26)—is how Newton spoke to his fellow Calvinists when they became too partisan or frankly bigoted while championing their beliefs. He told them that he used his Calvinism in his preaching as he used a lump of sugar in his tea. And here he would pause to drop a lump into his tea cup and give it a stir. Calvinism, like this sugar, was to be everywhere felt but nowhere met in distinct form. For anyone inclined to theological badge-wearing, or tempted to theological smugness or doctrinal bullying, Newton provides a chastening word even now.

Reinke’s book is not the place to turn for a historically sensitive account of Newton’s correspondence in its 18th-century context, or for a thorough scholarly analysis. Reinke aims more for theological universals. Sometimes this perspective diminishes the particularity of these letters. For me, it means much to know the details of the correspondents’ lives and the setting for Newton’s advice. For example, when he says in one letter that a sure mark of Christian maturity is that you know your own failings and therefore walk softly and resist being drawn into controversy, it helps to know that he publishes this letter in Gospel Magazine in the middle of a bitter, contentious public dispute between Calvinists and Arminians.

But for an account of Newton on the Christian life that makes his teaching available today to pastors and laypeople alike, this book succeeds marvelously. It is like Newton is still talking across a cup of tea, or writing pastoral letters to us all today.

Bruce Hindmarsh is the James M. Houston professor of spiritual theology at Regent College in Vancouver. He took his DPhil degree at Oxford University in 1993. From 1995 to 1997, he was also a research fellow at Christ Church, Oxford. He has since published and spoken widely to international audiences on the history of early British evangelicalism. His book The Spirit of Early Evangelicalism: True Religion in a Modern World won best History/Biography title in the 2019 Christianity Today Book Awards.