The image is etched in the American psyche: young boys lining the fence of a baseball outfield, craning their necks to catch a glimpse of their favorite player. Classic movies like The Natural and Field of Dreams perpetuate the idea of athletes as heroes, not mere humans. We all long to find the best athletes in any field, elevating them as examples and respecting them as role models. But in recent times finding role models has proven all too difficult. Our heroes are proving less than heroic. Headlines involving athletes are full of words like scandal, steroids, sex, and suicide. Few sports have been left untouched. Amid these disappointments, however, there are still diamonds in the rough—athletes with character to match their skill.

Jesse Florea and Mike Yorkey shed light on one such player in Mariano Rivera: The Closer Who Got Saved.

Authors and former Focus on the Family colleagues Florea and Yorkey weave together secondary sources and spiritual insight to paint a picture of a man with incredible talent and laudable faith. Rivera’s talent is undeniable, and the book begins with a play-by-play recounting of one of his finest seasons. On September 19, 2011, Rivera broke Major League Baseball’s all-time saves record. This feat cemented his place in baseball history and secured his membership in the pantheon of notable Yankee players. Technically, the key to Rivera’s success is his 93-miles-per-hour cut fastball. Spiritually, his success is attributable to his relationship with Jesus Christ. Florea and Yorkey shed light on both aspects of the closer’s life by examining his personal origins and public career.

Rivera’s journey began in Panama City, Panama, in 1969. Growing up in the nearby fishing village of Puerto Caimito, he learned baseball at an early age playing catch and loose games of stickball with others from his village. His father had enough insight to recognize the talent, encourage it, and get the young Rivera signed up for local leagues. The rest, as they say, is history. The accuracy of his pitching eventually caught the eye of Yankees scout Chico Heron, and on February 17, 1990, Rivera signed with the famous New York franchise.

Signing with the Yankees was a significant turning point in Rivera’s life, but it would be four more years until he’d make the greatest decision of his life. In 1994, Rivera accepted Christ as his Savior. “I realized that the Lord wanted a relationship with me,” he recounts, “and that’s when I became a Christian.” His decision was thoughtful and deliberate, and the evidence for its legitimacy is apparent throughout his meteoric rise. Florea and Yorkey record testimony after testimony about the firm foundation of Rivera’s faith. From the confession of his teammates to the origins of the Mariano Rivera Foundation, which aids underprivileged families in Panama and the United States, his faith is more than mere words. 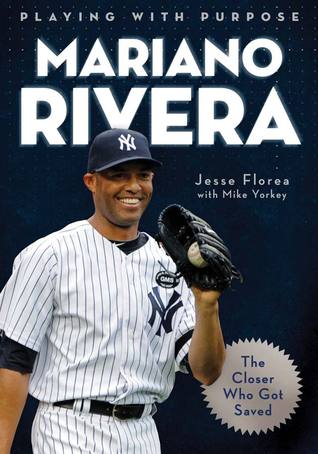 He’s a Hall of Famer in every possible way—and Playing with Purpose: Mariano Rivera is an easy-to-read, color-illustrated biography of the baseball’s all-time saves leader. What’s really cool is that when his storied career with the New York Yankees ends, Mariano Rivera plans to save souls in the ministry! Part of Barbour’s exciting “Playing with Purpose” series, this account covers Mariano Rivera’s life from his earliest days in Panama to his multiple World Series appearances and titles (even the 1999 MVP award),  all the way through the 2012 Major League season. It’s a story of sports and faith for all ages.

Mariano’s consistency comes largely from his faith in Jesus Christ. Over and over again, the Yankee closer has credited God for helping make him the player he is on the mound and the person he is off of it. “I can not move without his direction. . . . I am always trying to please the Lord, and that’s my goal.”

Three Strikes Against This Book

There are three concerns I have with the Florea and Yorkey’s book. First, it’s brief and compiled mainly from secondary sources, websites, and ESPN interviews. There seems to be a subtle attempt to appropriate some quotes as if Florea and Yorkey had conducted the interviews. It is not an authoritative biography, though admittedly it doesn’t pretend to be.

Second, the book is somewhat choppy in construction and lacks the sustained development of any major theme.

Third, some of the spiritual insights the authors provide concerning Rivera’s life seem forced and superimposed. Readers can never be certain if the Scripture quotations come from Rivera’s life story or the authors’ opinions.

Despite these minor downsides, however, there are plenty of positive aspects to the book.

Mariano Rivera is a brief profile of a believer’s career and testimony in Major League Baseball. It is ideal for teenagers, young adults, and Yankees fans who want to learn about a Christian athlete at the top of his game. The book contains an explicit presentation of the gospel and would be an excellent tool to share with the non-Christian sports fan in your life. Ultimately, in an arena increasingly devoid of heroes, this book reminds us the greatest role models point to the One greater than themselves.

Drew Griffin is a church planter on staff with Cross Church of Northwest Arkansas. He is working to launch Cross Church NYC in the Upper East Side of Manhattan in September 2014. He and his wife, Emily, live in Rogers, Arkansas.