In recent decades, the contested concept of “Christian masculinity” has been a focal point of anxieties in many American evangelical circles. The perceived unmanliness of many Christian men and the “feminization” of the church are decried by pastors whose “win-a-fight, punch-you-in-the-nose” image of Jesus evokes the stale-sweat pungency and testosterone-fueled volatility of a high school boys locker room. Elsewhere men are berated from pulpits, challenged to “man up,” to step up to their responsibilities, to provide for and lead their families. Men who are single or unmarried, bookish or less assertive, or who otherwise fail to project the desired image of overt, take-charge manliness, can feel inadequate or alienated.

Nate Pyle (pastor of Christ’s Community Church in Fishers, Indiana) articulates in his latest book, Man Enough: How Jesus Redefines Manhood, a sharply contrasting vision, charging many Christians with succumbing to a cultural model of masculinity alien to Jesus. Resisting the expectation that all men ought to conform to the single ideal of the “man’s man,” Pyle argues that “cultural ideals of manhood must be challenged because they inherently exclude those who don’t—or can’t—conform” (35). Rather than a single pattern of masculinity, we need to recognize the existence of “many different expressions of manhood” (25).

Our culture teaches us that men don’t just naturally become men; we must be made into men and must “prove” ourselves. Because manhood is a status that must be attained and demonstrated, it’s fraught by insecurity and anxiety since its very definition is unstable. Perhaps this is most seen in our concern to differentiate ourselves from and avoid being likened to women. A man’s tendency toward competitiveness is, Pyle argues, “born out of an anxiety we feel about the possibility that others might see us as a not-man” (33). 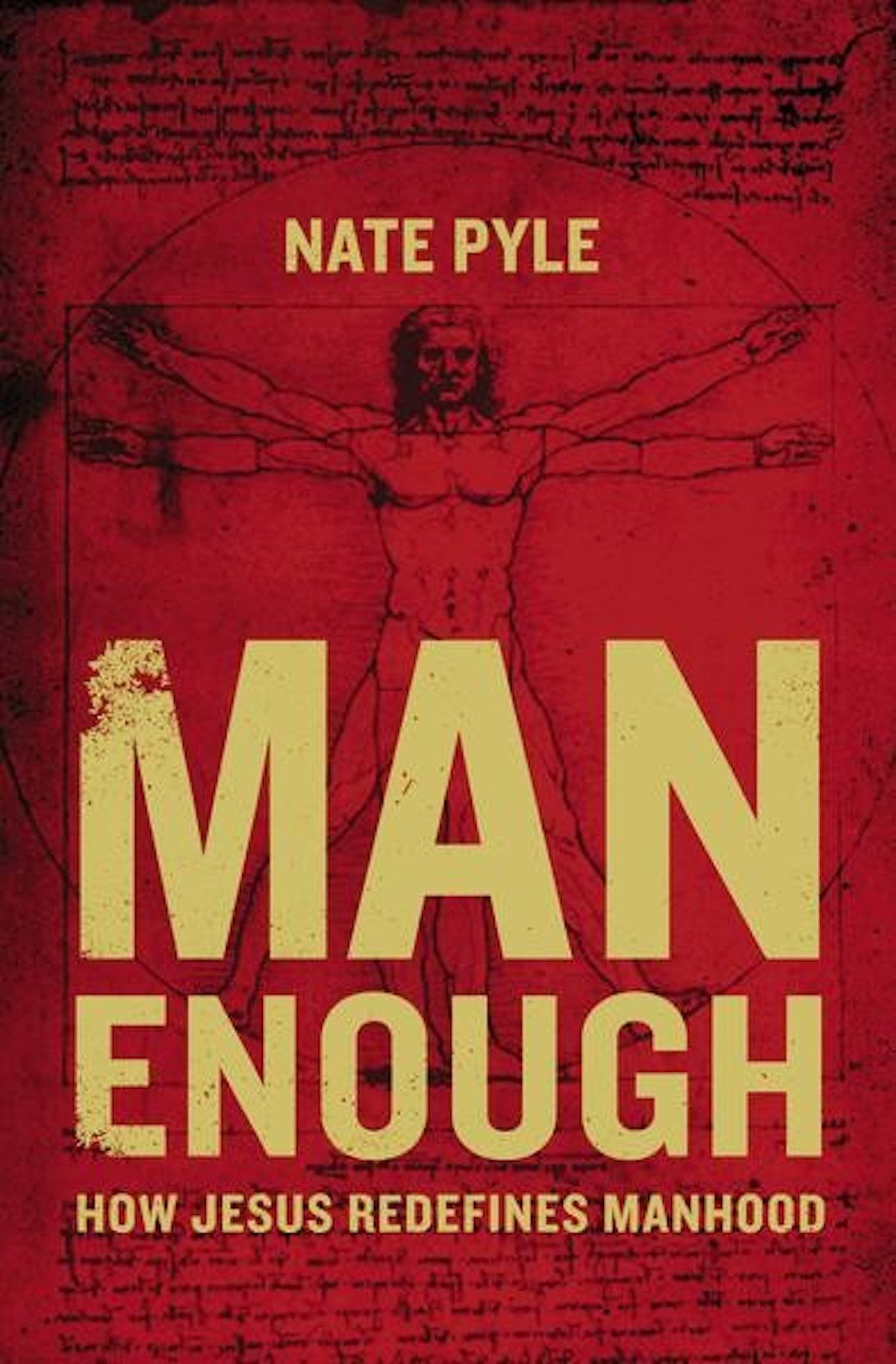 This concern to project an image of culturally approved manliness leaves us in a position of always wondering whether we’ve done enough to be “man enough.” The problem is exacerbated by a lack of healthy forms of initiation and of father figures to affirm us in our masculinity. The answer to proving masculinity, Pyle maintains, is to recognize that we have already been accepted:

Being a man is not dependent on what one does; rather, a man is a man because he is made in the image of God. That’s it. Focusing masculinity on what a man does makes it something to be proved. Masculinity does not need to be proved; it needs to be affirmed. (25)

Pyle’s account is an openly personal one, in which he relates his own experience of coming to terms with his masculinity and being emotionally vulnerable. The cultural pressures on men to avoid displays of weakness and hide vulnerable emotions prevent us from achieving healthy humanness, closing us off from others and even from the grace and power of Christ. There is a tremendously important form of courage that has been neglected in many of our visions of masculine bravery—the “courage to be vulnerably honest about who [we] are and what [we] can and cannot do” (123). Any “holistic masculinity” must recover this, learning how to fail and deal with our lack of strength.

Our preoccupation with culturally prescribed forms of tough masculinity has led us to portray a Jesus in their image, airbrushing out elements of the biblical portraits that would unsettle this—scenes where Jesus displays “feminine characteristics,” challenges the power and status-seeking of his disciples, and reveals himself in weakness and vulnerability.

While Pyle never denies common differences between the sexes, he opposes the imposition of sharply differentiated roles. “When characteristics are godly,” he writes, “they transcend masculinity and femininity and become traits that all people should seek to embody” (92). True manhood isn’t to be found in the direct yet doomed pursuit of proving ourselves “man enough,” but in the pursuit of Christlike humanness as a naturally diverse group of beloved sons.

There’s much in Pyle’s criticisms of prevalent models of masculinity that hit the mark: many men have fallen prey to a two-dimensional and restrictive stereotype, one that’s ignorant of the less overt forms mature manhood can take and that’s peculiarly susceptible to the dangerous emotional stuntedness he ably identifies.

When read against a different foil, however, Pyle’s own vision of manhood—despite its merits and the charitable manner in which it’s communicated—appears less than compelling in key respects. Both Pyle and the manhood models he criticizes seem to represent differing ways of inhabiting a contemporary crisis of identity. Identity is no longer generally perceived to be objective and given—a sort of cultural uniform by which we’re marked out by something greater than ourselves—but is becoming a self-reflexive and anxious process of self-expression (“I identify as ______”).

When we must articulate our “authentic” selves by clothing ourselves in a self-differentiating manner from a bewildering array of cultural signifiers—rather than masculinity representing something greater than me that I share in—I must either communicate its weight singlehandedly or shrug off the responsibility to “just be myself.” In fact, gender “roles” that may feel restrictive and oppressive in our consumer culture may afford liberation from our presumed burden of self-identification.

“Proving” one’s masculinity, then, may be considerably less demanding in contexts where manhood is more about conforming to and participating in given modes of shared male cultural expression rather than a constant demand of “authentic” self-expression.

Pyle’s discussion of “proving” manhood would’ve also benefited from more careful attention to the ways manhood can be defined in opposition to boyhood. Manhood is less about the traits that supposedly are or should be universally attendant upon maleness than it is about those characteristics that distinguish the mature man who has left boyhood behind him.

Pyle’s challenge to the direct pursuit of masculinity is in many respects salutary: manhood develops most appropriately when we pursue the kingdom of God rather than an idol of masculinity itself (and manhood differs from masculinity on account of its focus on maturity). However, the inadequacies of Pyle’s account—in part on account of his egalitarianism, in part on account of his focus on individual authenticity, and in part on account of his failure to attend closely to the form of maturity in and perfection of maleness—are most betrayed in its failure to give any shape to the concept of manliness. While, as Pyle argues, men and women aren’t called to different sets of virtues, their relation to and expression of these virtues do differ. Men and women may be compared to two different instruments playing the same notes, the difference between them immediately discernible by even the untrained ear, though often difficult to articulate.

What is “natural” to a human male isn’t simply what he does instinctively or spontaneously, but also those virtues in which male nature is perfected in his distinctive version of it. Pyle is right to oppose the hegemony of warrior manliness, but he errs in retreating from the concepts of male nature and corresponding manly virtues to the bare descriptive recognition that certain traits are more common among males.

I found a number of Pyle’s arguments in Man Enough especially perceptive. His caution about the direct pursuit of (an almost invariably stereotyped) masculinity and appeal to pursue Christlikeness instead is a valuable corrective in many respects. The necessity of learning how to overcome a brittle masculinity that cannot cope with failure or weakness is an important and challenging aspect of his treatment. Far too many men have been the victims of their own excessive commitment to manliness, having never learned this difficult yet essential lesson.

Despite the significant differences between our perspectives, I found Pyle to be a worthwhile and generous interlocutor. While he articulates a vision of masculinity that sharply opposes those of many contemporary evangelicals, he expresses his position with a disarming openness to his readers and in a manner that, although probably distorted by its chosen foil, admirably resists being defined by what it’s against. When I finished Man Enough, I discovered that, even given my differences from Pyle’s position, I was thankful to have read it.

Alastair Roberts (PhD, Durham University in England) works for both the Theopolis Institute the Davenant Institute. He participates in the Mere Fidelity and Theopolis podcasts, blogs at Alastair’s Adversaria, and tweets at @zugzwanged.