In most cases, historical icons do not develop before our eyes; the simply appear, fully formed, carrying their mythology with them. We do not meet George Washington as a struggling general; we meet him as America’s first President, as a war hero, as a man who could not, from boyhood, tell a lie, and who might have been king had he not chosen a different path for the greater good of the nation.

Like Washington, Lincoln appears as an icon. He’s enshrined in one of our capital’s great monuments, appears on two forms of our currency, and occupies a central space in our national sense of identity: Honest Abe, who freed the slaves and held together a fraying Union, all while speaking in a steady stream of folk wisdom.

Many films have attempted to give us a picture of Abe Lincoln, most recently, Steven Spielberg’s epic Lincoln, starring Daniel Day-Lewis as Lincoln and Sally Field as Mary Todd Lincoln. Lincoln, in Spielberg’s hands, was as most of us have come to know him, navigating wisely between the nation’s tensions, the interests of abolitionists and industrialists, and the pressures and needs of his family. We saw Lincoln making hard decisions and acting in almost every instance as the sage. The film encapsulated the legend, even as it gave us a wonderfully human portrayal of Lincoln from Day-Lewis.

The problem with legends, though, is that they obscure as well as they reveal. They are shorthand for a story that is much more layered and complex. Lincoln became Lincoln after innumerable challenges and errors, after suffering and failing and learning along the way.

Boy Before the Legend

The recently released film The Better Angels explores the unseen corners of this icon’s life. “Wanna know what kinda boy he was?” the narrator asks at the film’s opening, after we see a few images of the Lincoln Monument.

Shot in black and white, The Better Angels explores a narrow window of Lincoln’s boyhood in Indiana, starting in 1817 and extending through sometime after 1819. The film was written and directed by A. J. Edwards, whose other film credits—a handful of writing, editing, and other duties—all belong to Terrence Mallick films. Mallick himself is an executive producer on the project, and one can’t help but make comparisons between the two filmmakers. 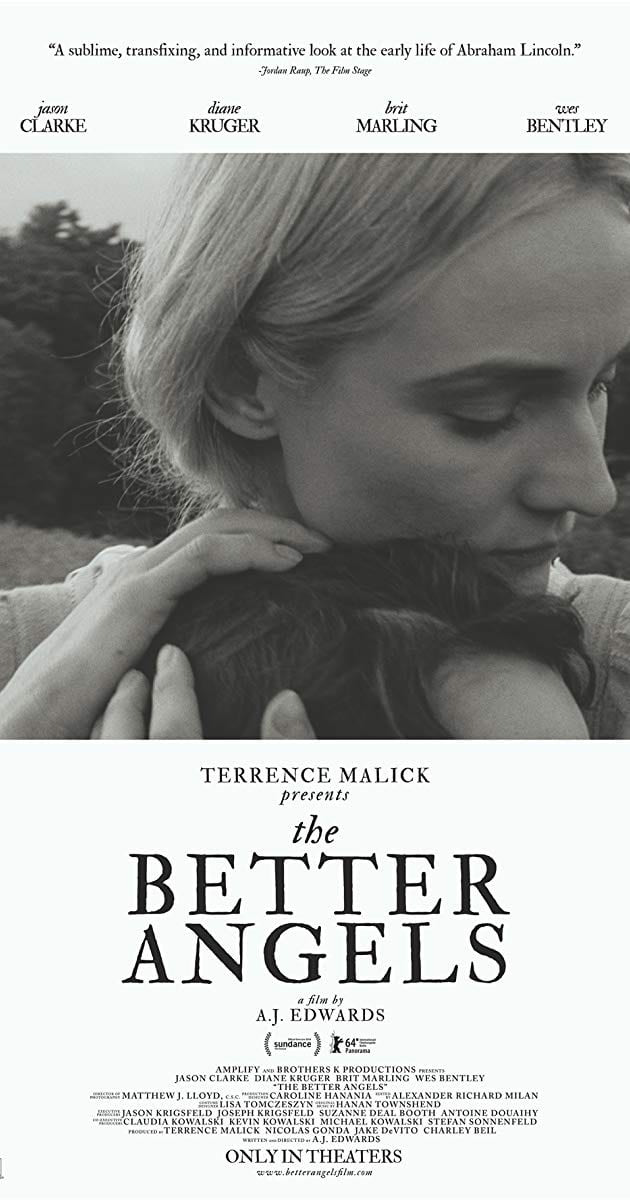 Like Tree of Life, The Better Angels hardly traffics in words; it traffics in images. The dialogue is rarely necessary to the storytelling, which happens at a slow, gentle pace, as Edwards’s camera lingers over the mists that form over grassy fields and the sun rising behind trees. We relish the wilderness with Nancy Lincoln (Brit Marling), and we feel its weight and hostility with young Abe (Braydon Denney). The camera rarely shows us Tom Lincoln (Jason Clarke) head-on; we see him looming over us, moving quickly in and out of the shot. Tom is a good man, but a hard man, and young Abe, who is naturally introverted and gentle, can’t help but be intimidated by his father.

His cousin says, “Them were drinkin’, cussin’, quarrelsome days.” The elements are hostile, and so are the wanderers who pass through. Suffering is never far from the Lincolns.

At the opening credits, a quote appears that reads, “All that I am, or hope to be, I owe to my angel mother. – Abraham Lincoln” (Interestingly, we don’t hear his name again.) Here again, we have—at least in concept—something that might feel familiar to viewers of Tree of Life. We see, in Abe’s life, a contrast between the way of nature and the way of grace, the hostility of the wilderness and the nurture and care of his mother and—especially—his step-mother, Sarah (Diane Kruger). The film’s most compelling scenes take place between Abe and Sarah, as her playfulness and love draw Abe out of his shell. Her arrival in the Lincoln family can only be described as the arrival of civility in the wilderness. She insists on love and gentleness, and Edwards paints her in glowing light, making her appear all the more angelic.

The Better Angels doesn’t handle religious themes directly. There is only occasional mention of anything directly related to Christianity—a mention of the Bible, a hymn sung while working in a field, and occasional images that suggest religious iconography. Many have written on the link between Lincoln’s parents’ Calvinism and his sense of history. But Edwards’s film seems to intentionally head in a different direction. If anything, you can’t help but sense the frailty of Lincoln’s life and future. He wasn’t born with a chinstrap beard, a stovepipe hat, and an ironclad sense of conviction. His life might have been otherwise. The frontier might have crushed him. Suffering and loss might have turned him inward and made him bitter. But Sarah Lincoln’s arrival in the family not only drew him out, it also drew him and his father toward one another, allowing Tom Lincoln to impart hard-earned courage and strength to his son. In this sense, rather than a theological reflection of the origins and meaning of Lincoln’s life or Calvinistic reflections on the meaning of history, Edwards’s film shows how Lincoln’s future came about as the result of his mother’s character and virtue. It is love and grace that shape great men.

The Better Angels may not be a blockbuster, and it’s certainly not (in tone and themes) a Steven Spielberg film, but it is beautiful and compelling. It invites us into a different pace, to reflect along the way, to watch the flow of the river and the swaying grasses. It’s a meditation on suffering, survival, love, and beauty. It takes Lincoln’s quote seriously, imagining how Sarah’s loving presence could not only turn a homestead into a home, but also turn a wounded and introverted young boy into someone with the strength and courage to become one of America’s greatest presidents.

Mike Cosper is the founder of Harbor Media in Louisville, Kentucky. He is the author of Faith Among the Faithless: Learning from Esther How to Live in a World Gone Mad (Thomas Nelson, 2018), Recapturing the Wonder: Transcendent Faith in a Disenchanted World​ (IVP Books, 2017), The Stories We Tell: How TV and Movies Long for and Echo the Truth (Crossway, 2014), and Rhythms of Grace: How the Church’s Worship Tells the Story of the Gospel (Crossway, 2013). You can follow him on Twitter.
Get Our Latest Book Reviews Delivered