C. S. Lewis’s Mere Christianity is one of the most acclaimed and influential Christian works from the 20th century. There are numerous reasons to appreciate the book—it is biographically reflective, immensely practical, carefully apologetic, and unpretentiously theological. Perhaps its greatest contribution is that Christians of any stripe feel as though Lewis is peering into their hearts and minds with keen understanding of the human condition. It is indeed a genuine, raw exposé on how Christianity answers humanity’s foundational questions of purpose and morality.

But there must be a reason why it’s so poignant, even today. In C. S. Lewis and Mere Christianity: The Crisis that Created a Classic, Paul McCusker offers an explanation for the soul-stirring effects of reading Lewis’s classic.

McCusker takes readers behind the pages of Mere Christianity and into the World War II context of Lewis’s British Broadcasting Corporation (BBC) radio addresses. It was in a BBC studio, at that notable time in history, that Lewis recorded the broadcasts that would later become the iconic book. This succession of talks appeared on the airwaves of a country embroiled in war. Lewis would receive letters from listeners, writing answers into his script to better apply Christian truth to an audience grappling with usual war-time questions regarding good, evil, and the workings of the universe. McCusker notes that for Lewis, the compilation that became Mere Christianity “captured the overriding intention behind the original broadcast talks: to explore those things commonly believed by ‘nearly all Christians at all times’” (188). Indeed, times of crisis only add ferocity to the questions people have always asked, and war requires the same answers Christians should provide (and believe) regardless of the situation. Lewis no doubt desired to speak into his immediate context, but he knew that the foundational longings were universal.

McCusker provides helpful information boxes throughout the text with facts about important people, places, and events for readers who are unfamiliar with the context. The author, known for his award-winning audio dramatizations of Lewis’s books, shines brightest while immersing himself in Lewis’s story. The book reads as though it is from the pen of a seasoned Lewis scholar, not a researcher merely presenting the fruits of his labor. Throughout it he calls Lewis “Jack,” the nickname of Lewis’s own boyhood creation. The personal interest is palpable and engaging. McCusker seems to get Lewis, not only describing historical data but also reflecting on Lewis’s personality quirks and thought processes. 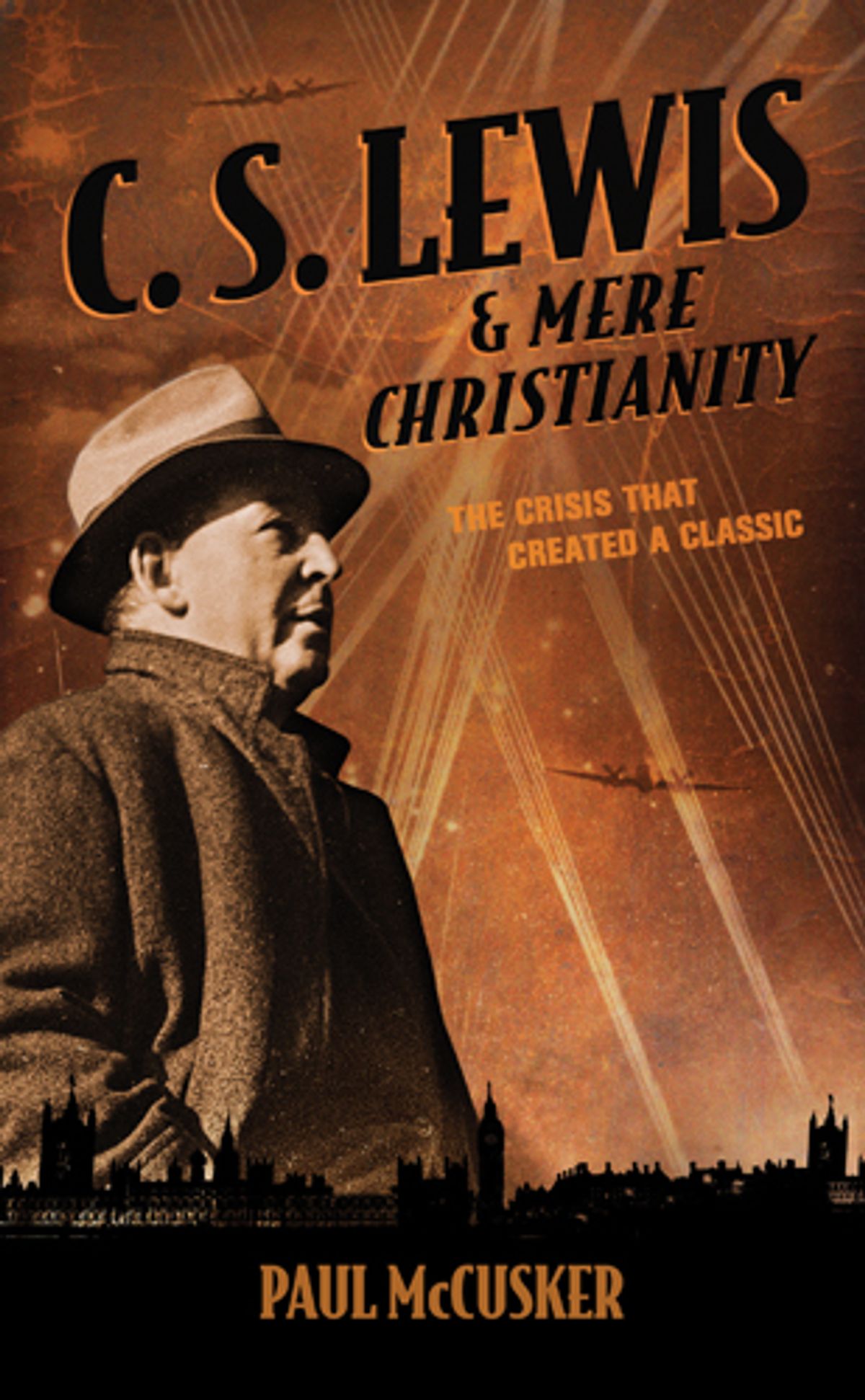 While there are multiple stellar biographies on Lewis’s life—to which the information contained in this book adds little new information—the focus of McCusker’s project creates new wrinkles in the biographies’ familiar stories. The highlight of the book is the connections he draws between events not perceived at first glance. For example, he develops the first few chapters by discussing the contexts of the two World Wars, the role of the BBC in alerting the country of emergencies, and Lewis’s time as a solider in World War I and a budding scholar as World War II approached.

As Lewis developed into a formidable wordsmith and ardent apologist for the Christian faith, he was afforded publishing opportunities. At the same time, the BBC’s James Welch and Eric Fenn sought to provide relevant religious programming to a wartime British audience. Welch, upon reading an early Lewis book titled The Problem of Pain, quickly believed that Lewis—clearly acquainted with the current fears and sufferings of their audience—was the perfect Christian voice for the task. So he wrote him a letter. Though Lewis “disliked the radio, finding it annoying and intrusive,” he “responded three days later with the yes Welch wanted” (100). That correspondence blossomed into the aforementioned series of talks, starting on August 6, 1941.

As one who enjoys history and who has read Lewis rather extensively, such a correlation is refreshing and fascinating. McCusker masterfully connects the context of the broadcasts, driving readers to ask questions and make parallels they may have never considered. As mentioned above, there is a story behind the power of Mere Christianity, and McCusker doesn’t disappoint in continually illuminating it.

There’s no doubt McCusker is a talented synthesizer. I’ve only provided one example of many wherein two roads converge and the reader is left saying, “Well played, McCusker.” That said, C. S. Lewis and Mere Christianity is scattered at times, chasing rabbits into tall grass before re-emerging onto the road. These diversions make the title and description of the book somewhat misleading.

Let me explain. The back cover entices readers, saying that they will “[d]iscover the people, adversity, and history behind a classic work that has impacted the lives of millions of readers.” True enough, there is plenty of background detail. So much, in fact, that the broadcasts are not mentioned until chapter eight, and the compiling of Mere Christianity into book form is not mentioned until the final pages of the entire book. Stories about Lewis’s family and friends woven in, chapter after chapter, detract from the truly distinct role this book plays in the scope of literature about Lewis. I had to re-engage several times per chapter because a page here or there would wander into the street before being reined back in.

One might retort that the broadcasts or the compilation of Mere Christianity were the mundane parts, and that the back story is the star of the show. Point taken, which is why a book promoted as merely about Mere Christianity could have involved more of the aforementioned connections to the talks/book without becoming bogged down in peripheral minutia. The highlight of McCusker’s work is the back story only when it is directly driving at the book’s stated purpose. I would have preferred the book at 150 to 175 pages with every arrow pointing toward those days in the BBC studio.

Information on the life and letters of Lewis is legion, yet C. S. Lewis and Mere Christianity has carved out its own rightful spot in the Lewis section of my bookshelf. Writing a helpful contribution to the saturated field of Lewis studies is a praiseworthy feat on its own. Further, McCusker succeeds at showing why Mere Christianity is a classic—it was birthed out of and poured into real human experience. He asks and answers questions about the book that most have never considered.

While I would have preferred a more focused approach, the book was a fun, quick read with the content still slightly less than 200 pages. This book may bore those solely interested in Lewis and lukewarm toward mid-20th-century history, but the appreciator of both history and Lewis will find it delightful.

Brandon D. Smith works with the Christian Standard Bible, serves as editorial director for the Center for Baptist Renewal, and co-hosts the Word Matters podcast. He’s also written a few books and blogs at Biblical Reasoning.

1 PMS: The Monthly Fight with the Flesh

3 How to Exasperate Your Children

4 Should We Use Bethel Songs in Worship? 4 Diagnostic Questions

5 The Rise and Triumph of the Modern Self

Tim Keller Wants to Prepare You for Death

How Do I Evangelize in Word and Deed?