There are around 2,000 verses in the Bible that relate to poverty. In For the Least of These: A Biblical Answer to Poverty, the authors state that poverty is a “scar on human dignity and an affront to God’s creation,” and they make the case that men and women transformed by the power of the gospel cannot pray “thy kingdom come” and do nothing about the plight of the poor. To that end, For the Least of These—edited by economist Anne Bradley and theologian Art Lindsley—is a collection of 12 essays touted as a “biblical answer to poverty.” Each written by a different PhD or industry leader, the anthology offers a veritable crash course in economics, biblical history, church history, American history, aid, and development. Together, the volume skillfully answers the twin questions of how and why we should help the poor.

While many Christian books on poverty leave the impression that wealth is inherently sinful and poverty somehow virtuous, For the Least of These uses Scripture itself to debunk that idea. Neither elevating the poor nor degrading the rich, the authors make clear that “just as poverty doesn’t guarantee virtue, wealth doesn’t guarantee vice.” They also draw an interesting distinction between wealth and riches, identifying one’s heart attitude as the differentiating factor.

Common misconceptions about practices (like Jubilee) implying that Christians ought to embrace a redistributive methodology are clarified, with one author going so far as to liken forced redistribution to theft. Insightfully, the book continually reaffirms that our motivation for the poor must be gospel-centered and not guilt-driven—making clear that Christians should live generous, self-sacrificial lives because Jesus was first generous and self-sacrificial toward us and because everything we have comes from God.

Helpfully, the book doesn’t talk about poverty in generalities, but rather acknowledges it can stem from a myriad of sources. Our remedies, then, must be as diverse as the problem itself. For the Least of These submits the causes of poverty are fourfold: (1) oppression by others, (2) external calamities, (3) moral failure and foolishness, and (4) living in a fallen world.

When the Church Gave Its Role to the Government

The authors offer a brief history of Christianity and social welfare programs, explaining that evangelism had historically always been linked to social welfare programs, ranging from feeding the poor to establishing hospitals and schools. The early Christians considered “remembering the poor” (Gal. 2:10) to be among their most basic moral imperatives—and they so cared for the impoverished, the sick, the enslaved, and the dying that the Roman emperor Julian complained, “These impious Galileans [i.e. Christians] feed not only their own poor, but ours as well.” As history marched on, however, the church weakened in her vision for society, moved away from “remembering the poor,” and absconded her role to the government: 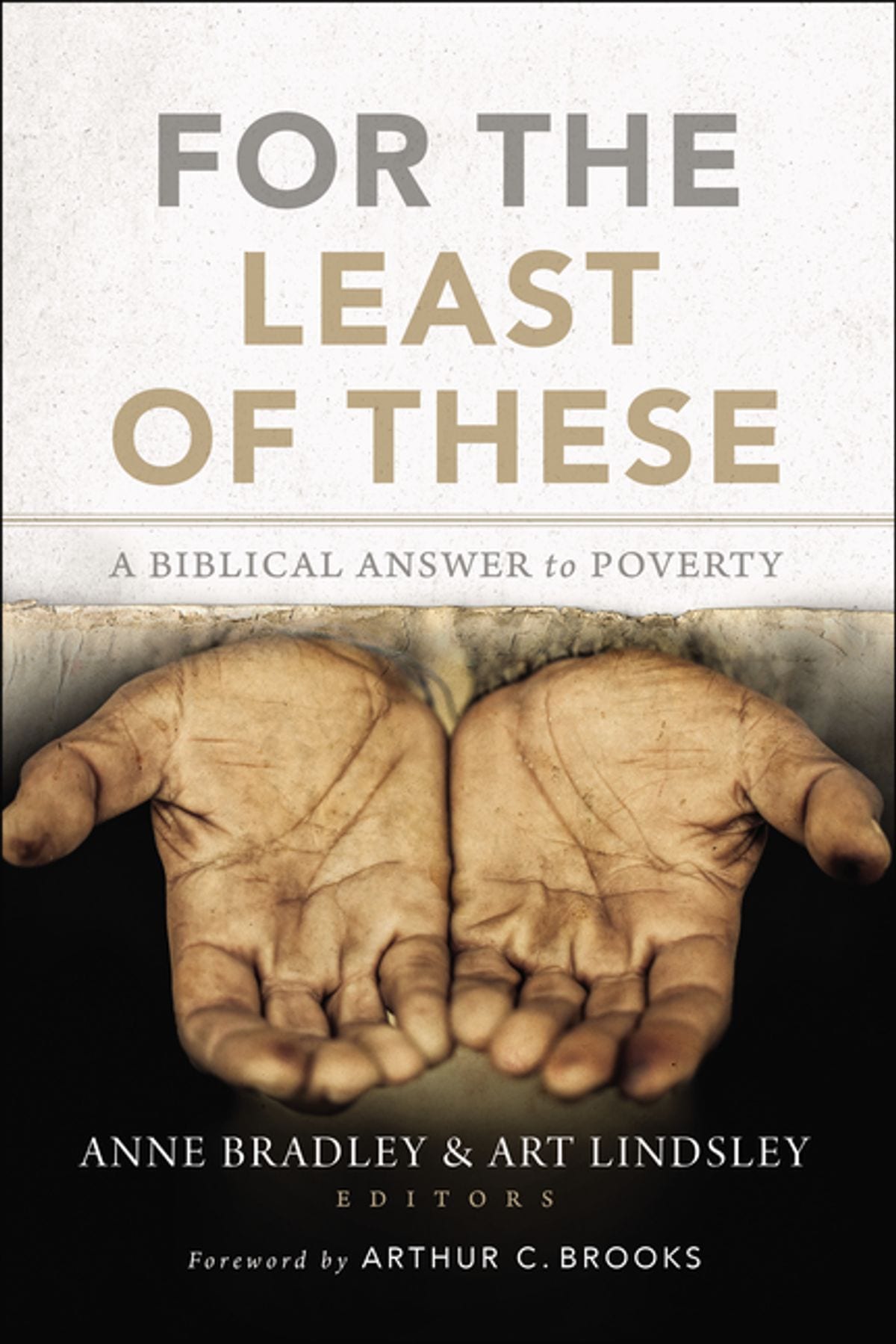 For the Least of These: A Biblical Answer to Poverty

For the Least of These: A Biblical Answer to Poverty

In the early 20th century, American church leaders, inspired by German liberal theology, essentially abandoned evangelism in favor of the “Social Gospel” and a nearly exclusive emphasis on this world. Conservative theologians rejected this change as a betrayal of true Christianity, but unfortunately they reacted by focusing exclusively on evangelism and the afterlife, while ignoring the relevance of the gospel of the kingdom for this world. American evangelicalism is still suffering from the aftermath of this division, which has discredited Christianity in the eyes of many young people in the country.

Unlike many other Christian books about poverty, For the Least of These offers a brief, fascinating history of America’s response to poverty. The contributors take us on a journey from America’s founding, where aid and relief efforts were expected to be carried out in the context of relationships by families, churches, and local organizations, to the Great Depression and beyond, where the government began to assume many of those roles. This transition from local, relational relief efforts to impersonal governmental programs was significant.

For the Least of These provides a holistic, compassionate view of how and why some popular poverty alleviation efforts have not only failed but also destroyed countless families and communities.

How the Gospel Transforms Poverty

In examining poverty alleviation efforts, the authors strongly oppose open-ended entitlements, redistribution of wealth, and unending aid to the developing world except in cases of emergency relief. Offering a passionate plea for Christians to embrace an “evangelical approach to the market,” they support development, suggesting relief efforts that focus on building infrastructure and creating jobs.

The book makes clear that holistic community transformation must include the transforming power of the gospel. One author claims that the best way local churches can alleviate poverty is to keep the gospel at the center of their preaching and teaching, believing that men and women who begin to look more like Jesus will seek out and restore the brokenness around them. A transformed believer will no longer oppress the men and women in his or her employ, but will instead pay a fair wage because they recognize all of their employees are made in God’s image. A transformed believer will actively seek to meet the needs of his poor brothers and sisters. A transformed believer will end harmful addictions and sinful behaviors that create and amplify poverty, and will instead accept the charge to work “as unto the Lord” and to cherish the responsibility to work and provide for his or her family.

In light of its broad scope, For the Least of These serves as a diving board from which Christ’s people can delve into Christ’s mandate to care for the poor. With its challenge to move beyond simple compassion and ineffective methodologies, the volume will serve as a valuable resource in helping Christians think strategically about this vital task.

Ashley Dickens lives in upstate New York, where the winter weather is incompatible with human life. She works for HOPE International, blogs at www.ashleypdickens.com, and spends an alarming percentage of her free time in pursuit of the perfect guacamole.

4 Did Jesus Have Female Disciples?