The question of why good people suffer evil has haunted human experience since Cain slew Abel. The Bible offers numerous reflections on this question, perhaps most notably Psalm 73. And it has fascinated philosophers, from Boethius onwards. Yet a more intriguing, if less frequently asked, question is surely this: Why do ordinary people do wicked things? And not just wicked things on the personal level—spousal abuse, rape, murder—but on the national and international level, too. A lot of ordinary Germans supported Hitler and were involved in implementing his genocidal policies. Why?

The most famous treatment of this issue is that of Hannah Arendt, whose eyewitness reports from Adolf Eichmann’s trial in Jerusalem came to form the book Eichmann in Jerusalem: A Study in the Banality of Evil. Arendt’s Eichmann is a buffoon, an unreflective mediocrity incapable of grasping the enormity of what he had done. In his own eyes, he was just the man who made sure the trains ran on time. That they happened to run all the way to Auschwitz was an incidental detail of no great moral moment to him.

While more recent research on Eichmann has called into question just how thoughtless and unreflective he was as he carried out his role in the Holocaust, the Third Reich still raises questions that should be disturbing to all who are confident they’re so civilized they could never be part of such horror. Germany was culturally and technologically the most advanced nation in Europe in 1900; 33 years later Hitler was its chancellor, and neither the Third Reich nor the Holocaust could have happened without the involvement of large numbers of ordinary, polite, civilized human beings. How and why?

The Christian answer is that human beings at their core are sinful, depraved, and twisted toward selfishness. That’s true; but the fact that that answer is true doesn’t mean it isn’t trite. The cause that explains everything in general explains nothing in particular. The British were similarly sinful, but they didn’t orchestrate the systematic annihilation of the Jewish population in London. The French had a worse record on anti-Semitism, but they didn’t host the Wannsee Conference. So why Germany? And what of lasting value can be learned, if anything at all, from the catastrophic crimes of such a civilized nation?

In his new book, The Law of Blood: Thinking and Acting as a Nazi, distinguished historian Johann Chapoutot offers an account of Nazi life that attempts to answer these questions. Examining everything from the ideological premises of Nazism to its practical application at home and abroad, both in the chaos of war and the implementation of governing, Chapoutot’s work offers a comprehensive view of the world as the Nazis understood and experienced it. And therein lies salutary lessons for us all. 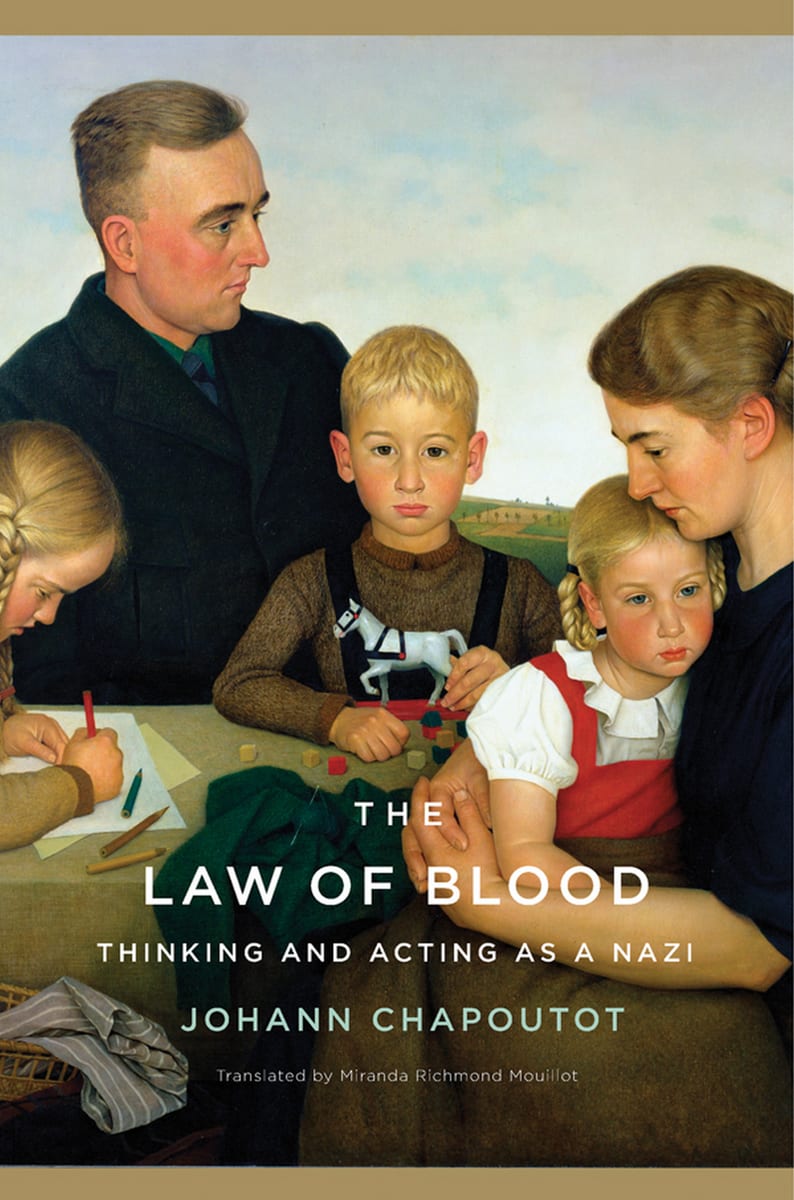 The Law of Blood: Thinking and Acting as a Nazi

The Law of Blood: Thinking and Acting as a Nazi

The scale and the depth of Nazi brutality seem to defy understanding. What could drive people to fight, kill, and destroy with such ruthless ambition? Observers and historians have offered countless explanations since the 1930s. According to Johann Chapoutot, we need to understand better how the Nazis explained it themselves. We need a clearer view, in particular, of how they were steeped in and spread the idea that history gave them no choice: it was either kill or die.

There has been a temptation in dealing with Nazism to dismiss Nazi ideology as shallow, a creed designed by psychopaths and believed by idiots. This is perhaps connected to an understandable fear that explaining the attraction of Nazism might somehow become a means of excusing it. The problem with such an approach is that it feeds the mentality that sees the Nazi “them” so alien to the enlightened “us” that we might just fall into the same ditch without even noticing. Chapoutot refuses such a simplistic approach. And at a time when the public square is polarized, and the dominant voices are found at the extremes, a book that addresses Nazism in all its cultural and intellectual complexity is a most welcome addition not only to the scholarly literature but also to the world beyond academia too.

Chapoutot presents Nazism as a vast, internally coherent and rhetorically compelling system of belief and behavior that was quite capable of adapting contemporary events to become part of its grand, self-justifying narrative. Many of its elements had deep philosophical and cultural roots. Chapoutot identifies a reverence for nature at the heart of the movement. The German race was distinctive and uniquely moral. Differences between cultures were rooted in biology, and biology possessed its own hierarchy.

The Christian answer is that human beings at their core are sinful, depraved, and twisted toward selfishness. That’s true; but the fact that that answer is true doesn’t mean it isn’t trite.

This is the basic premise from which Nazism grew, and it forms the core of Chapoutot’s first chapter. In subsequent chapters in part one, he demonstrates how this premise shaped attitudes toward religion, reproductive ethics, history, legal philosophy, and judicial practices. He demonstrates how the Nazis constructed elaborate historical and biological narratives, reinforced by the medium of film, to shape the popular imagination. The men who formed Nazi (and thus German) culture were no half-wit cave-dwellers. They were often academically and professionally accomplished. It was no coincidence that eight of the 15 men who attended the Wannsee Conference held academic doctorates.

In part two, Chapoutot focuses on the importance of struggle to Nazi culture. If the Nordic race is truly superior to the rest, then its experience will inevitably be marked by struggle as it moves toward its ultimate ascendancy. And this would take place on two fronts: in the German heart and in the world around. Regarding the former, Germans needed to overcome any feelings of pity for those who were inferior, for such emotions were likely to undo the grand destiny of the Nordic race. It is here that the battle against Christianity was waged most strongly: Christianity, as a religion that favored the weak, was particularly pernicious.

Christianity, as a religion that favored the weak, was particularly pernicious [to Nazi ideology].

In this context, I was surprised that Chapoutot didn’t mention Nietzsche. It is well-established that Nietzsche was no anti-Semite—Nazi theoretician Ernst Krieck once sardonically commented that it was only Nietzsche’s opposition to nationalism, socialism, and racialism that prevented him from being a great Nazi philosopher. But Nietzsche’s genealogical approach to moral discourse, his focus on Christianity as slave-morality, and his insight into ressentiment as driving ethical thinking all seem to underlie Nazi thinking on Christianity and also on Judaism as a religion.

In part three, Chapoutot concludes his study by showing how the Nazi narrative justified eastward expansion. If the myth of origin lay at the foundation of Nazi thinking, so did the myth of the destined final frontier. The apocalyptic horror of the invasions and occupation of Poland was the result of a consistent working out of the Nazi narrative in practice. Like The Godfather, the story of Nazism demonstrates how the relentless logic of a false premise can transform decent human beings into monsters.

There is always a danger with books on Nazism that the reader walks away with the words of the Pharisee on his lips: “I thank you, Lord, that I am not like other men.” Chapoutot’s book should provoke a different, more sobering response, for it is a clear demonstration of how the moral compass of a society can become distorted in tragic ways. The story he tells give credence to Alasdair MacIntyre’s insight that moral discourse is a function of narrative. Kant’s deontological ethics only make sense in a world that tells a particular story about itself, and the same is true of the ethical thought of Aristotle and Paul and Confucius and Muhammad and Thomas Aquinas. When the world is understood in terms of a story of origin and of destiny, then moral codes come to reflect and reinforce these.

Nazism thrived on a myth of origin (the Aryan race as the pinnacle of humanity) and of destiny (the ultimate triumph of the racially superior); and it fueled these myths with ressentiment of the Jews, aided and abetted by the “criminals” of Versailles and the decadents of the Weimar Republic. In that context, ethics of common human decency simply vanished, and systematic annihilation of Jews ultimately came to make sense.

The story of Nazism demonstrates how the relentless logic of a false premise can transform decent human beings into monsters.

The subsequent Holocaust was a tragedy the scale of which is hard to conceptualize today. But the same ethical dynamic that created it plays out every day in more trivial and truly banal circumstances. And Christians might be particularly susceptible. Anyone who has ever worked for a Christian organization knows that stories of origin are powerful—whether it is a tale of sacrificial fidelity in the fundamentalist-modernist controversy or the conservative resurgence in the Southern Baptist Convention. And tales of destiny, frequently connected to those myths of origin, loom large in the institutional imagination.

And the danger for such is this: transcendent ethical imperatives are relativized in the service of the local narrative. There is, to borrow a term, a teleological suspension of the ethical in service of ultimate destiny. People who are perceived to be in the way get treated like dirt. Lies are told—and believed—in the service of the greater destiny. And everyone becomes slowly but surely complicit in corruption, even as the rhetoric of piety is used not to hide but rather to justify the same.

That is where Chapoutot’s book will be useful for Christians. It tells the story of the gradual, logical, coherent corruption of an entire society in the service of great evil. In doing so it not only teaches us about the rise of Nazism. It also teaches us about the dynamics of moral thinking and behavior in a way that is a warning to us all, no matter how small and insignificant the little worlds we happen to inhabit.