Philosophy may have begun in wonder, but these days it’s often lost in technical language: either the convoluted prose of Continental-philosophers-who-use-too-many-hyphens to speak of human being-in-the-world or the LASIK-like propositional precision of certain Anglo American philosophers who prefer to drink their discourse logically neat: “straightened, not stirred.” It’s also lost in professionalization: like other academic disciplines, philosophers too increasingly have to specialize in order to find jobs.

Charles Taylor, professor emeritus at McGill University (Montreal), may be one of the last of the old-school philosophers—thinkers who pose wide-ranging questions, have the intellectual range to frame answers, and whose answers stem from a singular essential insight.

Taylor is best known as author of Sources of the Self (1989) and A Secular Age (2007), big books that try to come to grips with the human condition in our time. Taylor is a post-analytic philosopher, trained in analytic philosophy but part of an exodus from bondage to instrumental reason and naturalistic objectivity—a picture of language (and humanity) that has held moderns captive. It’s this picture of language as a depiction of the world outside us that Taylor both examines and rebuts in his new book, The Language Animal: The Full Shape of the Linguistic Capacity. Here Taylor takes up unfinished business that he started in his Philosophical Papers: Volume 1, Human Agency and Language (1985), in particular the two chapters titled “Self-Interpreting Animals” and “Language and Human Nature,” where he argues humans have linguistic capacities that other animals simply don’t.

The Language Animal marks an important battle in Taylor’s ongoing war against the forces of “immanentization,” namely, a reductionist naturalism that tries to account for meaning and meaningfulness in this-worldly (i.e., scientific) terms only, without any reference to history, narrative, a broader community, or transcendence.

How Not to Talk About Language

Taylor is out to debunk one picture of language, not least because it’s dehumanizing, and to set out and defend a second picture, which allows both language and humanity to come into its own.

Taylor dubs the first view the “designative” and says it developed from Descartes, Locke, and Hobbes. On this modernist view, words designate objects or ideas with which humans are already familiar. As Adam in the garden named the animals, so humans use language to label things that are given, already there. Words come too late to contribute anything new; they can refer to things and encode information, but they’re always after the fact. Further, if linguistic capacity means no more than labeling things, then perhaps we should call higher primates “language animals” too.

Taylor thinks this view mistaken, reductionist, and overly narrow, but he acknowledges its powerful grip on the modern imagination—a function of the paradigm status of science in our culture, of science’s interest in descriptive and instrumental uses of language, and of the physicalist assumption that privileges the vocabulary we use for describing matter in motion. 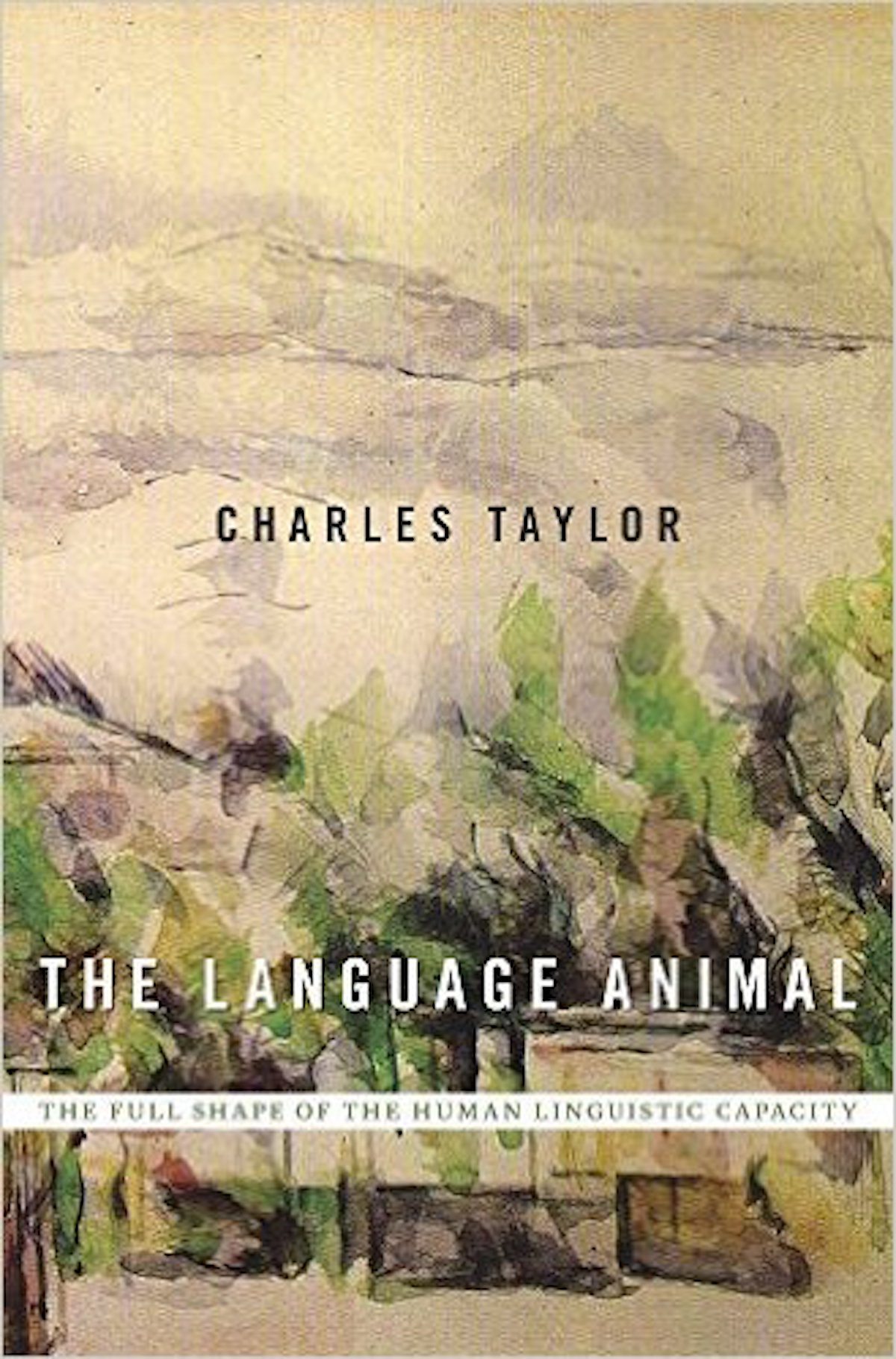 The Language Animal: The Full Shape of the Human Linguistic Capacity

The Language Animal: The Full Shape of the Human Linguistic Capacity

Taylor devotes the bulk of The Language Animal to arguing for the superiority of language not as an instrument for designating objects but as “the medium we are in; a feature of what we are” (90). Language doesn’t simply come after the fact; it’s the prior condition of our subjectivity and intersubjectivity. Taylor’s basic thesis is that “language can only be understood if we understand its constitutive role in human life” (261).

Of course we name things. Taylor doesn’t think the designative view is altogether wrong, merely incomplete. Speech expresses thought and refers to states of affairs in the world, but language doesn’t simply represent what exists independently. On the contrary, certain ways of viewing the world and being with one another wouldn’t be possible without language. Meaning doesn’t simply label but expresses “the significance that things have for us” (179).

Meaning isn’t atomistic (one word for one thing) but holistic: words have meaning only in the context of humans doing things together—in what Wittgenstein calls forms of life. One of the most striking of Taylor’s claims is that our “linguistic capacity is essentially shared: it sustains a shared consciousness of the world” (333). Without language, humans would lack the crucial capacity “for joint attention, or communion” (335). In the beginning was the dialogue.

And action. Taylor insists that language is related to forms of embodied life, forms of enactment-like ritual. The “country” of language we inhabit “goes way beyond the ‘province’ of information-encoding, important as this is” (99). Beyond the desert of designations lie metaphors and narratives that make possible new ways of seeing the world and of living together.

Articulate is an important term in Taylor’s vocabulary and has to do with the bringing of something to light—making some aspect of our existence visible that, without the language, would simply not appear. In bringing something to speech, we also bring it into explicit awareness and set it out in the open, so to speak, for others to consider too. For Taylor, our most important concerns—God, freedom, morality, the meaning of life—aren’t objects in the world, but concerns that exist for us only by virtue of their articulation in language, symbol, story, and song.

In an important sense, Taylor practices what he preaches, bringing to light an aspect of what it means to be a linguistic animal through 10 chapters of articulations. He clearly favors hermeneutical over analytic approaches to language, for the simple reason that the former, in attending to language as used in a variety of contexts, practices, and forms of life, does a better job of accounting for the messiness of human agency and history: “learning the language and learning to make sense of . . . life cannot be separated” (285). This essential insight only partially compensates for a style and structure not as translucent as it might have been with more editing. Nor does it help to learn that the case is incomplete: Taylor hopes to produce a companion study that will further explore his preferred constitutive view in post-Romantic poetry and poetics.

How Then Should Evangelicals (and Theologians) Speak?

What does this have to do with the gospel, or with evangelical theology? Quite a bit, actually.

There is little evidence Francis of Assisi ever said, “Preach the gospel at all times. When necessary, use words”—but if he did, his accent was misplaced, since the Bible and theology, not to mention missions, evangelism, and preaching, are all forms of ministering words. The gospel itself has cognitive content (though of course it cannot be reduced to cognitive content). It thus behooves us to ask: What is language? What is it for? How does it work?

The two pictures of language generate different pictures of thinking as well. In some evangelical circles, the logico-analytic mode dominates the narrative mode, but in other evangelical circles the narrative mode seeks to exclude the logico-analytic mode. The former may identify inerrancy with a narrowly designative view of language where truth is reduced to designative reference; the latter may become so intoxicated by the multivalence of narrative that it is uncomfortable speaking about inerrancy at all. Informed evangelicals, while insisting on the truthfulness of Scripture, have always preserved place for expressions like “doing the truth” (esp. 1 John), and for Jesus as the Word of truth, for spectacular diversity of literary genres that include the evocative imagery of apocalyptic and the crushed bruising of lament.

Should we always worry about trying to translate what stories articulate in narrative form into timeless, contextless truth? Does not the fact even the critics most influenced by postmodern voices are happy to talk about what narratives do and don’t mean intimate that, even while we recognize that narratives have their own way of making their rhetorical appeal, the narrative world is not cut off from considerations of truth? Taylor’s work raises questions about the social imaginary (i.e., the pre-theoretical framework for understanding that shapes all thought), including the various frameworks adopted by evangelicals.

Taylor thinks that contemporary analytic philosophy is still indebted in various ways to Cartesian philosophy and to the goal of using language to set forth an accurate description of the natural world and of seeing meaning as “something down-to-earth, and nonmysterious” (117). Is the task of Christian theology simply to designate the realities to which it refers in unambiguous propositions? Should we not follow the way the biblical words and themes and genres go, to trace them out and preserve them and penetrate them better? Put differently: to what extent is the canon a sine qua non of Christian consciousness, the mind of Christ?

Kevin J. Vanhoozer is research professor of systematic theology at Trinity Evangelical Divinity School in Deerfield, Illinois. He is the author of several books on theology, hermeneutics, and culture.