Of the writing of books on Jonathan Edwards, there seems to be no end. As a result, many features of Edwards’s thought and life have been examined. But one of the perennial questions that evangelicals face in studying Edwards is how to appropriate his vision of the Christian life and ministry while living in a very different time and place. As professor of church history at Trinity Evangelical Divinity School and author or editor of several scholarly books on Edwards, Douglas A. Sweeney is well-positioned for such a task, so he wrote Jonathan Edwards and the Ministry of the Word: A Model of Faith and Thought.

In the introduction Sweeney situates Edwards within his historical, social, and cultural contexts as a means of demonstrating the significant differences between Edwards’s world and ours. The most important difference is that Edwards lived in a society in which every aspect was shaped by the Bible. People in Edwards’s day “wanted their pastors to be learned more than flashy, therapeutic, businesslike, or even approachable” (30). In light of such differences, the goal for those who seek to apply Edwards’s insights is to ask, “What can we do in our own world to draw attention to the Word, enhance the ministries of the church, and deepen faith in the things of God?” (31).

Sweeney answers this question by highlighting at least three key areas of modern application as he walks through Edwards’s life.

The first is Edwards’s engagement with Scripture. In addition to comments throughout the course of the book, Sweeney discusses at length specific aspects of Edwards and his Bible. Preaching was the main form for this engagement, and Sweeney explores various features of Edwards in the pulpit (73–82). Also noteworthy is the extensive system of cross-referenced notebooks on various subjects where Edwards recorded his thoughts, exegesis, and even notes from his reading. As an interpreter, Edwards was an heir to the Reformation tradition, practicing both literal and spiritual exegesis (83–106). Typology was especially prominent in Edwards’s thinking, evidenced by his willingness to move beyond explicit biblical types to viewing all of nature as typological of spiritual truths.

A second key area is Edwards’s pursuit and promotion of spiritual awakening. Edwards’s role in the First Great Awakening put him on the map, as his accounts and defenses of these awakenings brought him international recognition (107–44). According to Sweeney, these writings on revival “represent the most important body of literature in all of Christian history on the challenge of discerning a genuine work of the Holy Spirit” (120). 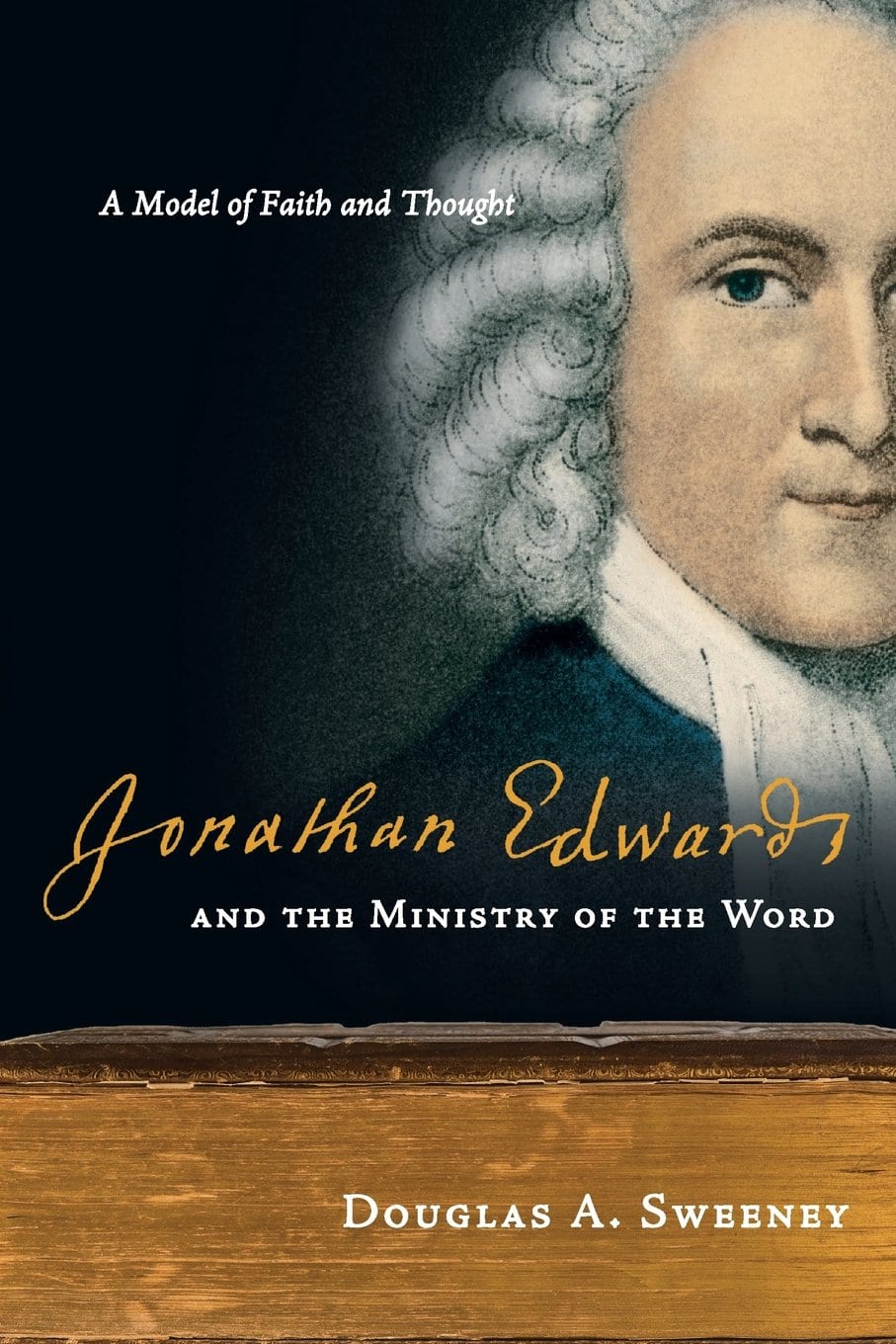 Jonathan Edwards and the Ministry of the Word: A Model of Faith and Thought

Jonathan Edwards and the Ministry of the Word: A Model of Faith and Thought

Jonathan Edwards has been recognized as the most influential evangelical theologian of all time. Before his death at the age of 54, he had sparked a new movement of Reformed evangelicals who played a major role in fueling the rise of modern missions, preaching revivals far and wide, and wielding the cutting edge of American theology. He has never gone out of print, and Christians today continue to flock to seminars and conferences on him. In this biography of the great preacher and teacher, historian Douglas Sweeney locates for us the core and key to Edwards’ enduring impact.

Edwards’s sizable intellectual pursuits are a third key area (145-64). Sweeney highlights four treatises: Freedom of the Will, Original Sin, End for Which God Created the World, and Nature of True Virtue. Sweeney overviews each work, diligently making such challenging treatises accessible to the reader. The place of the mind in loving God and the role of the Holy Spirit are singled out as key features in Edwards’s intellectual life.

Sweeney concludes the book with “Seven Theses for Discussion” as a means of summarizing what we may learn from Edwards (197–200). Thus, Edwards shows us (1) the importance of working to help people gain a vivid sense, an urgent impression, of God’s activity in the world; (2) that true religion is primarily a matter of holy affections; (3) the advantages of keeping an eschatological perspective on our lives; (4) how God uses those who lose their lives for Christ; (5) that theology can and should be done primarily in the church, by pastors, for the sake of the people of God; (6) that even the strongest Christians need support from others; (7) the necessity of remaining in God’s Word.

The strengths of this book are legion. Those who have already read George Marsden’s Jonathan Edwards: A Life or even his recently released A Short Life of Jonathan Edwards will already be familiar with the basic contours of Edwards’s life. But Sweeney’s particular contribution is to filter that narrative through the dual lenses of Edwards’s love for the Bible and his passion that people experience divine realities in daily life. He combines lucid prose with a passion for people to embrace Edwards’s vision of the Christian life and ministry. Scattered throughout the book are helpful applications to today.

Yet Sweeney’s obvious affection for Edwards does not blind him to Edwards’s flaws, as his discussion of Edwards’s ownership of slaves and his poor handling of several pastoral situations reveals. The seven theses for discussion are thoughtful discussion starters for appropriating Edwards today. Also helpful are additional features such as a timetable of Edwards’s life, a list of his family members, a map of his world, and indices for names, subjects and Scripture references.

One area where the book could have been strengthened would have been to expand the discussion of the “Seven Theses for Discussion.” At a mere four pages the reader is left longing for Sweeney to flesh out further how each thesis might apply today.

In sum, this is a book that will benefit every Christian. But pastors, missionaries, theological students, and everyone else in vocational ministry especially should read this book. In fact, if you can only read one book on Jonathan Edwards, make it this one. You will not be disappointed.

Matthew Harmon (PhD, Wheaton College) is professor of New Testament studies at Grace College and Theological Seminary in Winona Lake, Indiana. He was previously on staff with Cru for eight years and is the author of several books, including Jeremiah: A 12-Week Study and Making All Things New: Inaugurated Eschatology for the Life of the Church. Matthew and his wife, Kate, live in Warsaw, Indiana, and have two sons.

3 Why Matthew’s Disability in ‘The Chosen’ Matters

5 God Hasn’t Wasted My Marriage to an Unbeliever