Not unlike other eras of development within the life of Christianity, the fifth century proved to be a time of political and religious uncertainty—an instability with profound effects on Christian theology. Philip Jenkins, a noted scholar of historical and religious studies and professor at Penn State University, examines the political conflicts surrounding Christology as stated by the great Chalcedonian Council of 451 in Jesus Wars: How Four Patriarchs, Three Queens, and Two Emperors Decided What Christians Would Believe for the Next 1,500 Years. According to the author, many Christians rely upon authoritative statements of belief without understanding the motivations and context from which resulting doctrinal summaries flowed. Serving as an enlightening remedy to this reality, Jenkins provides an excellent resource for persons not wanting to be guilty of such uninformed belief.

Although Chalcedon established a particular Christology as official doctrine throughout the Roman Empire, Jenkins believes, “Chalcedon was not the only possible solution, nor was it an obvious or, perhaps, a logical one. Only the political victory of Chalcedon’s supporters allowed that council’s ideas to become the inevitable lens through which later generations interpret the Christian message” (xi). He undergirds this belief by arguing that Chalcedonians and their enemies rose and fell politically following the 451 council. At times, pro-Chalcedonians appeared to be the ones facing exclusion from established “orthodoxy” (12). What became “Christianity” thus remained open to question throughout the following centuries. According to Jenkins, fifth-century Christians addressed such uncertainty by increasingly looking to four centers of Christianity for sound leadership: Antioch, Rome, Alexandria, and Constantinople. Jenkins also notes Jerusalem’s rise to prominence following 451. As these centers argued—often without much progress—concerning the nature of Christianity, imperial favor became the means of securing doctrinal victory over rival positions. Therefore, Roman emperors and their queens began to exercise the voice needed to finalize certain Christian beliefs. Imperial intervention did not so much force certain views as much as channel popular belief (125).

Despite imperial and ecclesiastical decrees, “heretical” groups such as the Monophysites and Nestorians continued to proclaim themselves to be valid expressions of Christianity and flourish in non-Western contexts. The implications of doctrinal and political struggles preceding and following Chalcedon brought about irreparable divisions within the Christian faith. Therefore, numerous unfortunate results of post-Chalcedonian wrangling came about: the Roman empire came to an end, Islam gained a sympathetic hearing, Christianity crumbled in much of Africa and Asia, and the Christian religion largely migrated to the European continent. 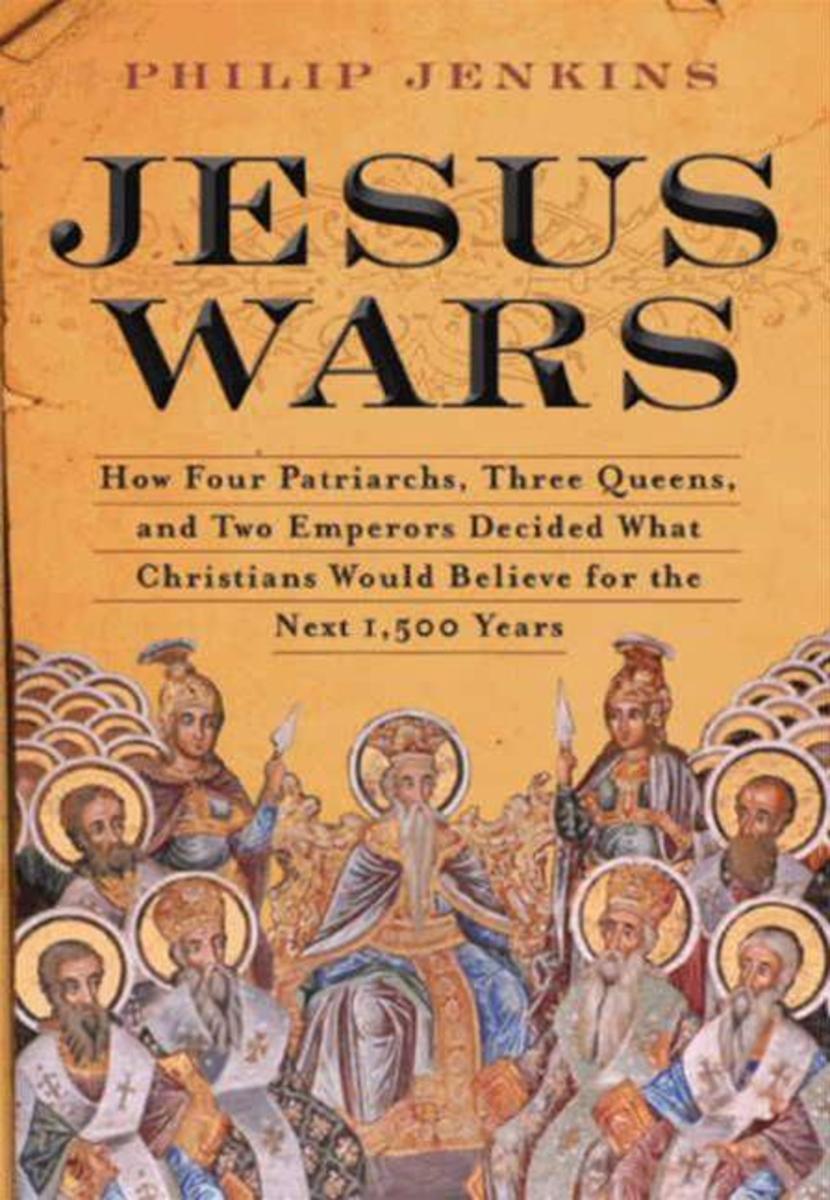 Jesus Wars: How Four Patriarchs, Three Queens, and Two Emperors Decided What Christians Would Believe for the Next 1,500 Years

Jesus Wars: How Four Patriarchs, Three Queens, and Two Emperors Decided What Christians Would Believe for the Next 1,500 Years

In this fascinating account of the surprisingly violent fifth-century church, Philip Jenkins describes how political maneuvers by a handful of powerful characters shaped Christian doctrine. Were it not for these battles, today’s church could be teaching something very different about the nature of Jesus, and the papacy as we know it would never have come into existence. Jesus Wars reveals the profound implications of what amounts to an accident of history: that one faction of Roman emperors and militia-wielding bishops defeated another.

The author’s central thesis rests upon two intellectual commitments from which he bases the remainder of his book. He states, “If religion shaped the political world, then politics forged the character of religion” and “The christological debate was settled by one straightforward issue: which side gained and held supremacy within the Christian Roman Empire and was therefore able to establish its particular view as orthodoxy” (p. xiv). Therefore, the advocates of a particular theological position who held the most political sway ultimately determined what subsequently came to be known as true Christian belief.

Flowing out of these positions, several themes consistently emerge throughout the book: the issue of religious authority, church and state relations, correct interpretation of Scripture, the ethics of Christians in ecclesiastical and political leadership, and a correct view of salvation. From Jenkin’s perspective, groups like the Monophysites, Nestorians, and Arians were not excluded because of doctrinal commitments as much as the “orthodox” groups had the political authority to declare them aberrant. Lest contemporary Christians view their orthodoxy as secure, Jenkins also addresses recent restatements of ancient Monophysite and Gnostic beliefs as well as restated solutions to such doctrinal problems. Therefore, Christian history is truly “a story of resurrections without end” (271).

Jenkins provides a text that causes one to reexamine certain perspectives excluded from orthodox theology by the Western church. The author furthers the conversation regarding true and aberrant Christianity while providing an implicit cautionary message concerning the nature of theological exclusion. Although his point does not necessarily advocate a broadening of orthodox Christian doctrine, he certainly raises questions concerning groups traditionally considered heretical. His questions are well-taken, but some readers may desire stronger parameters as to what is actually “Christian.”

One wonders if Jenkins simply allows all self-proclaimed Christians to be included in Christianity. While such luxuries may be afforded to historians, theologians will approach this issue with a different perspective. Readers may also take issue with the weight that he ascribes to political power in the development of established Christian theology. Certainly, ecclesiastical politics have marred the Christian religion and the influence of the state on the church has overstepped proper boundaries at times. These unfortunate realities do not, however, lead to the absolute conclusions proposed in this work. In fact, Christian history often includes theological expressions according to Chalcedonian definitions that directly contrast with the ones required by political compulsion. In such cases, Chalcedonian doctrine has survived or even prospered despite political opposition. Seemingly contrary to his own argument, Jenkins concedes this point later in the book (269).

Jenkins’s work is a helpful addition to Patristics studies and deserves attention from established scholars as well as students who are new to this field. While the book does not provide a close analysis of primary source material, it will prove to be a worthy introduction to the subjects examined. For example, Jenkins includes several appendices that define key persons and events. He also summarizes key church councils and theological positions throughout the work. Perhaps, the author’s greatest contribution is that he provides a companion text to the numerous sources that address Patristic theology. Readers desiring to understand political impositions on and implications of Chalcedonian theological developments will discover an excellent resource in Jenkins’s text.

J. Ryan West (PhD Candidate, The Southern Baptist Theological Seminary) is the LoveLoud national coordinator at the North American Mission Board. He assists Southern Baptist churches and educational institutions throughout the United States and Canada in establishing and conducting gospel-centered ministries of mercy to proclaim Christ while meeting human needs in significant and sustainable ways. Also, he was tasked recently as an assistant editor for The Andrew Fuller Works Project, a 15-volume series to be published by Walter de Gruyter.