Israel’s future has been a contentious issue among American Christians. Many still view Israel through dispensational lens while other interpreters react against it. At the same time, many denominations have deep-seated differences on the relationship between the New Testament and the Old Testament.

In response to the confusion, Gerald McDermott—professor at Beeson Divinity School in Birmingham, Alabama—argues for a “New Christian Zionism” in his latest book, Israel Matters: Why Christians Must Think Differently about the People and the Land. He believes that the church doesn’t replace Israel and that the promises to the Jews will still come true.

McDermott doesn’t give many details about the fulfillment of these promises; instead, he focuses on the final picture. Israel will be brought back to their land (which is part of the new world but also distinct) and blessings will flow to the whole world from the New Jerusalem. Israel, as a people and a land, still matters. 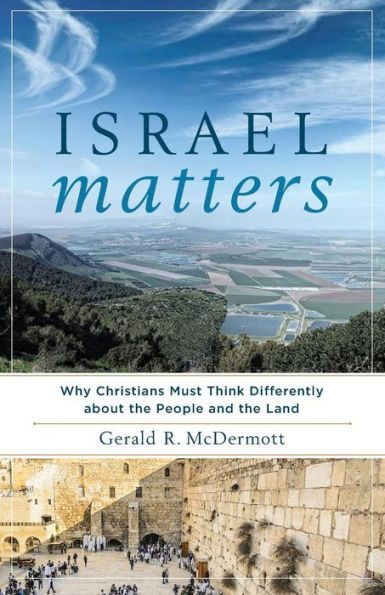 McDermott begins with a bold statement: “Most Christians for most of Christian history have been wrong about Israel.” They’ve believed in what some call supersessionism, the view that the church has superseded or replaced Israel. He identifies historical proponents of this view, including Justin Martyr, Irenaeus, Origen, Luther, Calvin, and Schleiermacher.

He then argues against this view from the New Testament: “When the New Testament authors wrote ‘Israel,’ they did not mean ‘church’” (20). He gives a historical survey of Christians who believed in this view, which he calls New Zionism. Justin Martyr and Irenaeus, although believers in supersessionism, still got some things right, as did Tertullian, Augustine, and some of the Reformers, Puritans, and 18th-century heirs of the Puritan tradition.

McDermott goes on to show the Old Testament teaches that salvation for the world comes through Israel. Additionally, the promises in the New Testament still support a future for both the people and also the land of Israel.

The final chapters address political and theological objections, and then McDermott closes with six proposals:

(1) in Israel we see ourselves and God;
(2) the history of redemption is ongoing;
(3) prophecy is real but mysterious;
(4) it’s not over till it’s over;
(5) Israel and the church are joined at the hip; and
(6) the history of the Jews shows us the mystery of iniquity.

This “New Christian Zionism” will be attractive to people for at least four reasons.

First, McDermott ditches what was problematic with dispensationalism. He focuses on the people and land and strips away unnecessary eschatological detail.

Second, he grounds his view in history. Dispensationalism has been critiqued for being relatively new, but McDermott shows that “New Zionism” has a rich historic tradition, existing long before the rise of dispensationalism.

Third, he grounds his arguments in Scripture and doesn’t prooftext. He takes on tough texts that seem to work against his thesis.

Fourth, his proposal comes at a time when Christians are thinking more carefully about ethnic relationships. In biblical studies, there’s a movement within the Pauline school called “Paul within Judaism” or “The Radical Perspective on Paul,” which would align with many of McDermott’s implications. In many ways, McDermott simply affirms that the promises to Israel will be fulfilled in the future (how literally is another question).

But I wonder if this will work. I’m afraid that what’s attractive about “New Zionism” will never be able to be separated from dispensationalism (though this isn’t McDermott’s fault). When you try to summarize McDermott’s view in America, people will look at you and say, “Oh yeah, that’s dispensationalism.”

First, it’s curious that McDermott employs some of the same church fathers both to support his case and also to show there’s been a history of supersessionism. The overlap might demonstrate that the fathers were at different times emphasizing the continuity and the discontinuity between Israel and the new people of God. The historical section indicates that the same people point to both unity and disunity.

Second, McDermott claims “the church is never called the new Israel.” True. But they’re called the Israel of God (Gal. 6:16). Peter himself gives an incredible list in 1 Peter 1:15–2:10 about Jews and Gentiles being the people of the new exodus, the Passover, the new covenant, the new temple, and a kingdom of priests. Additionally, when the Holy Spirit falls on people in Acts, they’re portrayed as the new temple. We need to pay attention not only to the words that are used in Scripture, but also to the images.

Fourth, while McDermott argues for a future restoration of Israel, I’d argue for a future salvation of Israel; the distinction is important. Restoration involves salvation, but goes beyond that. It includes Israel being reinstalled as a nation in her land. Is McDermott suggesting (like dispensationalists) that only the new covenant’s spiritual aspects are inaugurated in this age, while the territorial and political aspects are still to come? In my opinion, it’s better to see the entire new covenant as already inaugurated (both spiritually and materially), with the final consummation still to come.

McDermott presents two ways on this issue: supersessionism or New Zionism. But why are those the only options? I offer my most significant critique by proposing a third way: “fulfillment.”[2] This avoids clunky statements like “the church replaces Israel” and also provides more information about what it means that “Israel matters.”

Fulfillment avoids two misunderstandings: (1) that Jesus came to set aside old promises, and (2) that Jesus simply came to say the old promises continue in the same way. Jesus didn’t come to abrogate the law or to simply affirm it; he came to fulfill it. The New Testament authors argue that Jesus fulfills the law and the identity of Israel, and the church is an outgrowth of this fulfillment. The tension between the new and the old is illustrated and encapsulated in the word “fulfillment.”

These positions can be put on a spectrum:

It seems to me that McDermott falls into the trap that Jesus avoids in Matthew 5. The law is neither simply abrogated nor affirmed, because the environment has completely changed: Christ is here, and that makes all the difference.

McDermott’s proposal has some attractive features, but I think he falls too far on the affirming side of the spectrum. By using the third way of “fulfillment” we can still affirm that Israel matters, but then we can ask, “In what way?” All our answers must come only after we’ve grappled with our Christology, the triune nature of God, and the biblical storyline.

[1] I am reliant on this concept from Brent Parker’s helpful chapter, “The Israel-Christ-Church Relationship,” in Progressive Covenantalism: Charting a Course Between Dispensational and Covenantal Theologies, edited by Steve Wellum and Brent Parker.

[2] This is substantially similar to what some are calling “progressive covenantalism.” For more, see Kingdom through Covenant: A Biblical-Theological Understanding of the Covenants and Progressive Covenantalism: Charting a Course between Dispensational and Covenantal Theologies.

​Patrick Schreiner teaches New Testament and Greek at Western Seminary in Portland, Oregon. You can subscribe to his podcast, Food Trucks in Babylon, and you can connect with him on Twitter.