When it comes to applying their faith to their culture and the public square, evangelicals seem to be in a rough spot regarding the right balance between thinking and doing. One generation has been chastened by Mark Noll’s heartfelt appeal to cultivate the evangelical mind, replacing the standard refrain of “don’t just sit there, do something!” with “don’t just do something, sit there (and think for a bit).”

A more recent generation of evangelicals has taken to heart the message of James K. A. Smith’s Desiring the Kingdom—that an overemphasis on worldview thinking can obscure the reality that we’re desiring creatures formed more by practices than informed by mastering intellectual content. Like Goldilocks, we vacillate between too hot and too cold, too hard and too soft. We want to live out our faith in tangible ways, but we also want to think well about how to do that effectively, responsibly, and winsomely.

Jordan Ballor’s Get Your Hands Dirty: Essays on Christian Social Thought (and Action) is an invaluable resource for the socially conscious and intellectually curious Christian, and Ballor argues convincingly that Christians should be both. Ballor, working on a second doctorate while a research fellow at the Acton Institute and editor of Acton’s Journal of Markets and Morality, is particularly well suited to address the various ways Christians can and should engage the myriad issues and controversies of the day.

And what a range of issues and controversies. From family and marriage matters, to environmentalism and responsible charitable giving, to engagement with Rob Bell’s universalism or Jim Wallis’s social vision, the topic list runs the gamut. Get Your Hands Dirty is characterized by Ballor’s incisive commentary and generous treatment of his interlocutors, as well as a host of creative approaches to his many subjects. Ballor not only knows his paces when drawing from august theological figures like John Calvin and Dietrich Bonhoeffer, but he is equally adept with ruminating on artifacts of popular culture, as seen in his treatment of HBO’s Deadwood and the Dark Knight trilogy (29–34, 195–97). 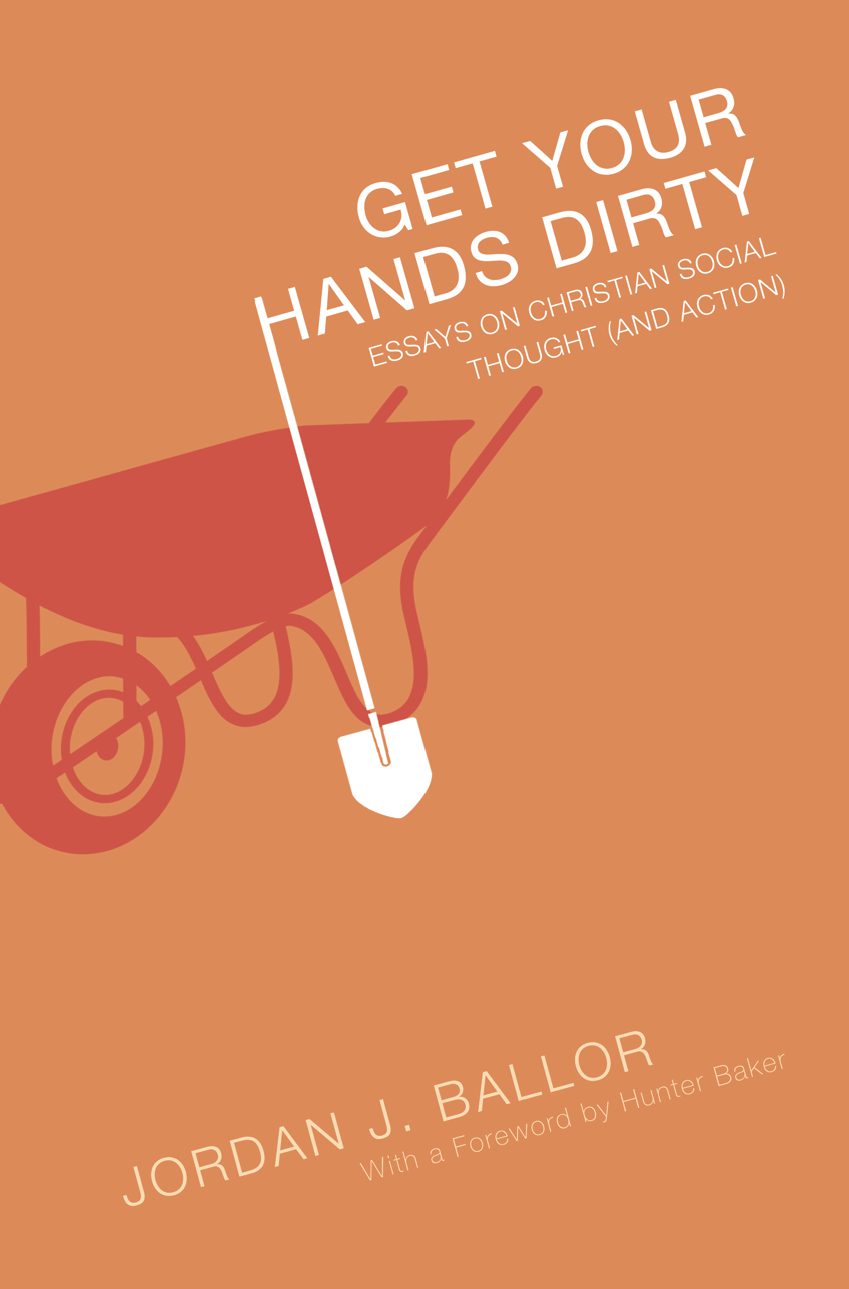 Get Your Hands Dirty: Essays on Christian Social Thought (and Action)

Get Your Hands Dirty: Essays on Christian Social Thought (and Action)

If the book’s theme is how Christians should think about and act on a host of issues, the book’s structure is harder to describe. Ballor tells us in his acknowledgements section (xiii) that Get Your Hands Dirty comprises various tidbits he’s written over the last decade, some from blog posts and others from newsletters.

We might describe most books as being somewhat similar to a fine meal, as a book will open with an eye-catching appetizer to whet interest, articulate an overarching thesis, and proceed through the argumentative courses to culminate in a satisfying dessert-and-coffee conclusion. Get Your Hands Dirty is not like most books; it’s more akin to a social event with heavy hors d’oevres served throughout the evening. Ballor’s sections certainly are substantive, interesting, and have a great presentation. But the transitions between subjects can be abrupt, and finding a common thread can be challenging, as illustrated by one 21-page section that moves from genetic modification of food (76–84) to a meditation on The Hunger Games, faith, and tyranny (84–88) to an economic analysis spurred by reflection on the Great Recession (88–96). This observation is not so much a criticism as a description, though given the array of issues the book would have been well served by an index guiding readers to topics or figures of particular interest.

Readers will find various aspects of Ballor’s arguments more or less persuasive. While I mainly nodded in agreement, even those who frequently demur will find a lively and friendly sparring partner in Ballor. That said, one crucial question I think needs additional consideration is the extent to which Christians should identify with particular political and policy questions. Ballor is rightly concerned that denominational and other church-related bodies might mistake their prudential policy preferences for essential doctrines of the faith and thus reduce Christian social witness to a “particular ideology or partisan agenda” (139). Thus he encourages believers to acknowledge that for most issues there are a number of defensible positions to take. Evangelicals should not be considered “outside the tent” unless they deviate on “the few social issues on which the perspective of Scripture is rather straightforward” (143).

Yet it’s precisely the biblical grounding of these crucial few issues that’s most hotly contested. Is Scripture clear about the nature of marriage? Does the Bible favor a particular approach to abortion? Are there any policies derivable from Scripture for tackling poverty? Regardless of one’s views on these issues, Christians clearly think them deeply important and agree that Scripture’s answers are discernable even while disagreeing at times over the content of those answers. This is illustrated on the Left and Right, whether we consider the pro-lifer’s citing of Psalm 139 or Wallis’s characterization of certain plans to reform social security as violating the commandment to honor our parents.

Christians must often determine what the genuinely Christian position is in a given context, taking stands on particular issues and even legislation—as they did during the struggle to end racial segregation in the American civil rights movement or in affirming the Barmen Declaration in 1930s Germany. Exercising such discernment may or may not require identifying who is in and out of the tent, but it surely requires determining what moral stands constitute authentic Christian witness.

Ballor is entirely correct to worry about erring in the opposite direction, such as when Christians add “Thus saith the Lord” to secondary questions. Nevertheless, the religious liberty controversies that have only continued to erupt since Get Your Hands Dirty was published suggest that a season of uncomfortable but necessary clarification will be necessary. Such a season will require wisdom from thinkers grounded in the Christian intellectual tradition and deeply conversant with current trends and modern political, cultural, and economic realities. Jordan Ballor is one such thinker, and Christians would do well to consider his considerable contributions collected in this volume.

​Micah Watson is an associate professor of political science at Calvin College.