James Skillen’s The Good of Politics: A Biblical, Historical, and Contemporary Introduction is a mixed bag. Skillen, who retired a few years ago as president of the Center for Public Justice, has thought carefully about profound issues. He makes his insights accessible, and newcomers will profit from them. But he is trying to do a lot of things in too small a space; the book falls short of its promise because it takes on more than any book could really deliver in only 195 pages.

Skillen describes the book as a defense of the intrinsic good of politics—an argument that politics is not merely a restraint on our corruption after the fall, but a central element of human life in God’s original creation design. As American evangelicals have grown disappointed with politics, it has become commonplace to draw a strict separation between “politics” and “the culture.” People are starting to say that politics is ultimately about power, but culture is about meaning and purpose, and that’s where we find all the really important action.

Skillen gently rebukes this dualistic way of thinking. He reminds us of the critical truth that politics is always and everywhere a part of human culture, never separate from it. It is one essential element of our search for meaning and purpose. It is only one part, so we must resist the temptation to politicize everything. But separating politics from culture only encourages immorality and injustice. It gives aid and comfort to those who treat politics as a cynical power game. It also ensures that our apolitical “cultural” efforts will be neutered and incoherent, unable to give a full account of justice.

Skillen’s vision of a politically engaged Christianity is big and appealing:

In this shrinking, warming, flattening, warring world, people everywhere may legitimately ask, What does the Christian way of life have to offer by way of wisdom, justice, and love for the responsibilities of governance, child raising, economic development, science, technology, schooling, and everything else that pertains to life in this world? Words are not sufficient to answer that question. The response must come from the practice of a Christian way of life. (195)

We desperately need more books making the case that politics is a good part of God’s plan for the cultural life of human beings.

Unfortunately, Skillen does not stick to his stated purpose. He attempts to take on many additional tasks over the course of the book. As a result, a surprisingly small portion of The Good of Politics is actually devoted to upholding the good of politics. 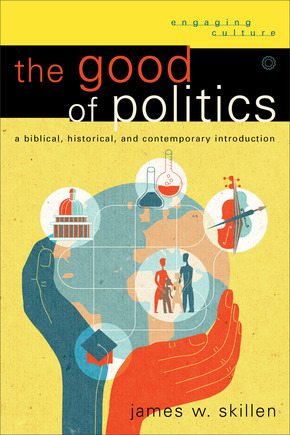 The Good of Politics: A Biblical, Historical, and Contemporary Introduction

The Good of Politics: A Biblical, Historical, and Contemporary Introduction

Any one of these three tasks would have been enormously difficult to accomplish in just 195 pages. To do all three in such a small space is probably beyond anyone’s ability. So it is no knock against Skillen to say that he doesn’t succeed at all the tasks he has taken on, but he would have done better not to make the attempt.

The first section of the book does a good job of laying out the basic concepts necessary for a sound political theology. Human beings were made to live in intergenerational cultural communities, and to rule the creation order within these communities. Skillen lays out the theological foundations of this view in a simple and harmonious way that will be helpful to those approaching political theology for the first time. He also steers clear of some common oversimplifications, making this an especially valuable introduction.

However, his treatment of views he disagrees with, such as the two kingdoms approach of David VanDrunen or the anti-political politics of Stanley Hauerwas, is so superficial that it stoops to unfair caricature. Skillen also falls accidentally into proof-texting on several occasions; he did not discover the value of religious freedom by studying Matthew 5:43–47 or the need for limits on political authority by studying Hebrews 5:13–14. This problem could have been avoided if he had acknowledged the interdependence of political theology and political philosophy.

The second section of the book is by far the strongest. Intellectual history is hard to do well. If it is accurate, it tends to become boring; if it is interesting, it tends to become irresponsibly detached from the facts. Skillen navigates the challenge well. I particularly appreciated his discussion of important medieval developments that have relevance for our questions today, but are usually glossed over (mea culpa!) in historical reviews. That said, given the space constraint he was working under, his efforts to make complex and sometimes paradoxical figures like Augustine and Luther accessible to lay readers are bound to be dissatisfactory to anyone who knows them well.

The third section is the weakest and does not have much to recommend it. That is not because I disagree with all his positions—on some topics, such as education, I share his views with great enthusiasm and urgency. However, Skillen’s accounts of contemporary issues are too abstract to be useful to practitioners and do not break enough new theoretical ground to be interesting to scholars. His engagement with those he disagrees with is once again superficial and unfair.

Moreover, Skillen’s deep desire to show that all things in God’s universe are ultimately made to be in harmony leads him to ignore the hard choices we face. To take only one from many examples, his chapter on economics says that society must “recognize and encourage entrepreneurial talent, production and commerce, free markets for the exchange of goods and services, and the creative development of economically qualified organizations of diverse kinds” (178). It also says that “the political community [should] agree from the start that any change in environmental conditions would trigger government’s action to protect the environment and its sustainability” (181). If Skillen sees any tension between these pronouncements, he’s not showing the slightest sign of it.

We can and must find ways of reconciling an entrepreneurial economy with environmental protection. But Skillen is not contributing anything useful or interesting when he simply proclaims that we can have our cake and eat it, too. He should have allowed himself to wrestle with more tensions.

This book will be helpful to those who know nothing about political theology and philosophy, and would like to start learning—provided they bear in mind that it is full of bold oversimplifications, especially in its treatment of positions Skillen disagrees with. However, anyone who already knows the subject will probably find this book more simple than stimulating. And it does not really fulfill its stated goal of defending the good of politics. But I do hope Skillen has more books in him—I enjoyed this book in spite of its limitations and would look forward to reading another one.