The enemy has never stopped attacking that target; indeed, he continues to this day. He wants to undermine our trust in the authority of God’s word.

Once we understand this strategy, we realize the battle for the Bible isn’t a modern phenomenon. It’s part of a battle stretching back to Eden. This battle has manifested itself in different ways throughout history. In the Middle Ages, it took the form of an attack on the sufficiency and clarity of Scripture. Today it largely centers on ways of thinking that arose during the Enlightenment. And the question is no longer simply “Is the Bible true,” but also “Is the Bible good?”

In whatever form the battle appears, Christians must enlist.

Do we really need another book on this subject? Aren’t there many already? Yes, but most Christians today remain uninformed about the doctrine of Scripture. We simply don’t have an adequate grasp of the meaning of this fundamental Reformation doctrine. So we’re blown about by every wind of doctrine that comes our way.

Barrett—tutor of systematic theology and church history at Oak Hill Theological College in London—divides his work into three parts. Part One is a historical survey examining the original Reformation-era debates over the authority of Scripture, the effect of the Enlightenment and theological liberalism on the doctrine of Scripture, and recent developments in the 20th century. These chapters place the entire debate in its proper context.

Part Two is a biblical theology of God’s word. These chapters trace the theme of God’s Word through God’s Word. Barrett examines the ways in which our triune God has revealed himself through redemptive history, culminating in the incarnation of the Word himself (John 1:1–14). 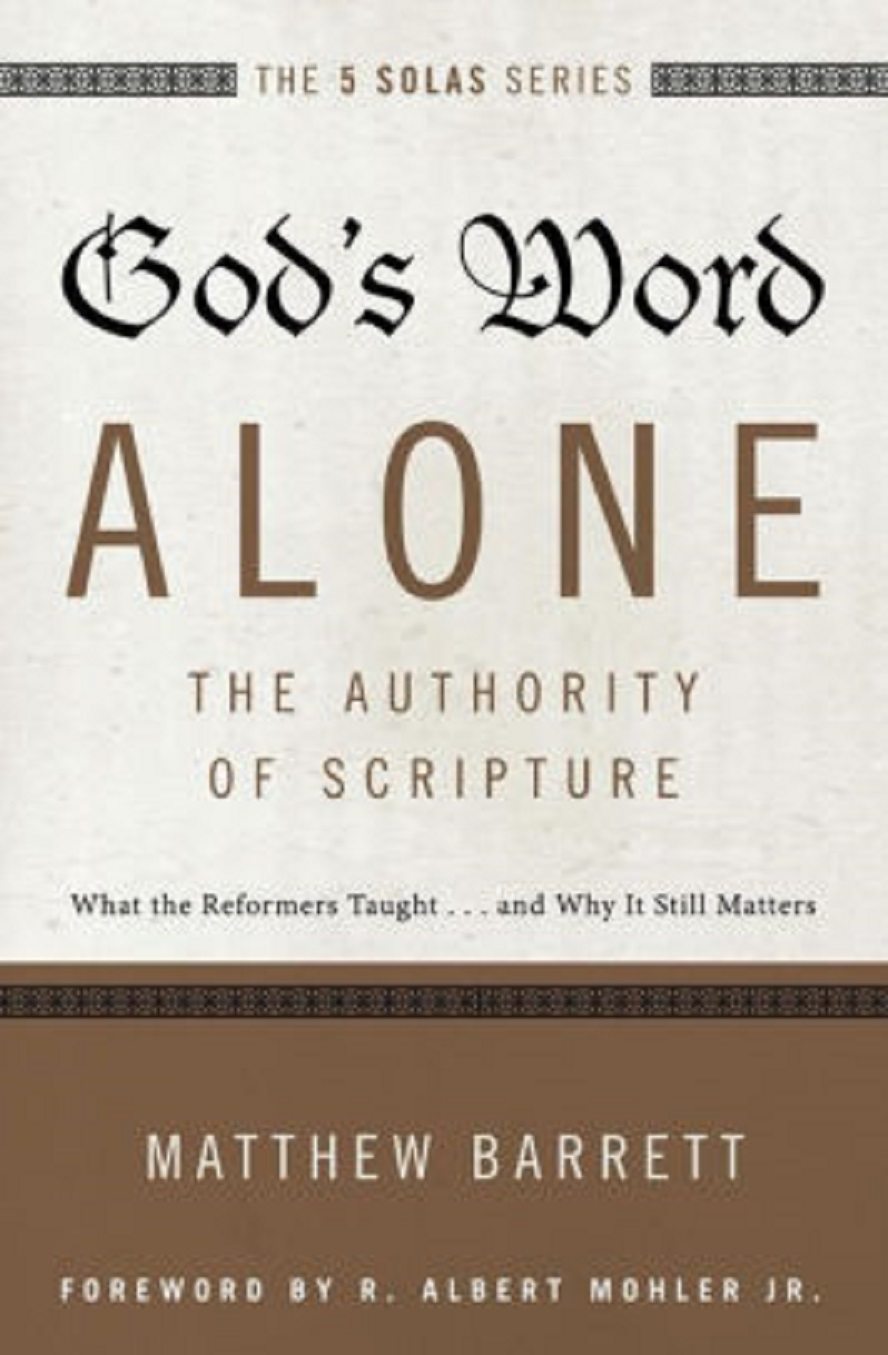 Part Three is a systematic explanation of several significant attributes of Scripture. These chapters offer a fairly standard approach to the inspiration, inerrancy, clarity, and sufficiency of Scripture, summarizing many of the best arguments offered by past theologians. By combining all of this material into one volume, Barrett has provided the church with perhaps the single best resource on the Protestant doctrine of sola Scriptura.

Though God’s Word Alone is the lengthiest installment in the (still incomplete) 5 Solas series, I believe Barrett could’ve addressed one topic more fully: the Eastern Orthodox view of Scripture. Space constraints mean choices must be made, and Barrett chose to pass. He does acknowledge in a footnote that the discussion would’ve been worthwhile (347 n. 30).

Historically, Reformed authors haven’t often addressed the Eastern view, since few in the West were exposed to it. In our day, though, the landscape has changed dramatically. The internet has shrunk the world. Immigrants from largely Orthodox nations mean many of us encounter Orthodox neighbors far more often than our parents or grandparents did. In recent decades, there have been a number of prominent conversions of Protestants to Eastern Orthodoxy. There’s also been a rise in Orthodox books and websites aimed specifically at Protestants. One recent apologetic work written by an Orthodox priest calls the doctrine of sola Scriptura “vacuous.” The apologetic efforts of both cradle Orthodox and Protestant converts to Orthodoxy require us more than ever to grasp the Orthodox doctrine of the relation between Scripture, tradition, and the church.

Western scholars such as Heiko Oberman, who’ve spent much of their careers studying the different ways Christians have understood Scripture and tradition, have created labels for the various views. As Barrett points out, Oberman’s categories of “Tradition 1,” “Tradition 2,” and “Tradition 3” are helpful ways of grouping different Western approaches to Scripture and tradition. Yet none of the labels adequately describes the Eastern Orthodox view, which developed on its own trajectory as West and East gradually separated.

In fact, it’s difficult to nail down a precise Orthodox definition of “tradition,” since Orthodox authors define it differently. Timothy Ware, for example, defines it as the faith and practice handed down from the time of the apostles. For him, tradition is a broad concept that includes the books of Scripture, the creed, the decrees of the ecumenical councils, the writings of the early church fathers, the liturgy, the icons. It’s all of the above and more (The Orthodox Church, 196). Without denying what Ware has said, others such as Michael Pomazansky speak of tradition as something that in some sense “supplements” Scripture (Orthodox Dogmatic Theology, 33). For Georges Florovsky, on the other hand, “tradition” is Scripture rightly interpreted (Bible, Church, Tradition, 75).

These selections illustrate the difficulty of grasping the Orthodox doctrine of Scripture. Indeed, sometimes it’s not clear whether they agree among themselves. They do agree, however, that the Protestant doctrine of sola Scriptura is deficient, and they’re becoming more vocal in their criticisms of it. Some Reformed theologians (e.g., Robert Letham in Through Western Eyes) have recognized the need to become more informed about Eastern Orthodoxy in order to respond to its challenges. I believe future Protestant defenses of sola Scriptura must do the same. Eastern Orthodox views can’t simply be lumped together with those of Roman Catholicism. The differences between them—including the way they proselytize Protestants—requires a clear understanding of each.

Despite this slight deficiency in regard to interacting with Eastern Orthodoxy, I commend God’s Word Alone to any interested in an excellent single-volume resource that covers all of the traditional bases.

Editors’ note: Join us in Indianapolis next April to learn more about the Reformation’s relevance to various areas of life and ministry. Our 2017 National Conference—“No Other Gospel: Reformation 500 and Beyond”—will celebrate the Reformation’s 500th anniversary and feature more than 50 talks from 65 speakers. Browse the list and register soon! Rates increase after Reformation Day (October 31).

Keith A. Mathison is professor of systematic theology at Reformation Bible College. He is author of several books, including The Shape of Sola Scriptura and From Age to Age: The Unfolding of Biblical Eschatology.