John Woodbridge and Collin Hansen lament that many amazing stories of revival have been lost to contemporary evangelicals. They have written A God-Sized Vision: Revival Stories that Stretch and Stir to remedy our revival amnesia. The goal of this book is to “inspire you to petition the God of all grace for revival in our day” (17). It does so through engaging narratives of revival, beginning with Jonathan Edwards and the First Great Awakening and ending with the post-World War II evangelical boom. While explicitly written to inspire, these are no naïve, breathless accounts. The authors, one an eminent historian and the other a skilled journalist, utilize some of the best primary sources available and, at times, interact with the most current historiography. While commending these carefully chosen revivals as the work of God, they also identify flaws such as the lack of biblical teaching in the Welsh Revival of 1904 and the failure of revival to prevent genocide in Rwanda.

In addition to being a history of revivals, this book is also an argument for revival. The authors seem to write with one eye on those within the church who criticize the benefits of past awakenings and wisdom of seeking more. Chapter one presents a biblical theology of revival, showing instances of awakening in the Bible, like what occurred during the reign of King Josiah. They commend the Edwardsian vision of revival as a sovereign work of God while rejecting Finney’s “new measures” (32–33), though Finney’s more mechanistic understanding of revival does appear in the narrative at times—especially in chapter six on the East Africa revival. Finally, they urge Christians not to “wait idly,” but to confess their sins, preach the Bible, and pray for God to work in an extraordinary way (35).

This book has helped instigate a small but important conversation on how evangelicals should think of revival. Tim Keller welcomed the appearance of A God-Sized Vision, and briefly described his experience of “Revival (Even) on Broadway.” In a follow-up post, “Revival: Ways and Means,” Keller identified recent opposition to revival as a main reason there is less enthusiasm for it than when he was a young minister, and described five “factors that, when present, often become associated with revival by God’s blessing.” 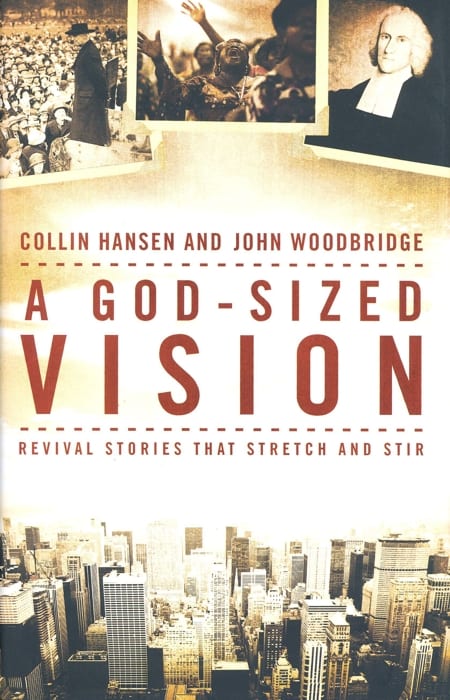 A God-Sized Vision: Revival Stories that Stretch and Stir

A God-Sized Vision: Revival Stories that Stretch and Stir

The historical stories of worldwide revivals in this book enlarge our hearts and expand our minds as we see God at work in human history with a power that is still available to the faithful today. Here scholars Collin Hansen and John Woodbridge recount the fascinating details of world-changing revivals, beginning with biblical events and continuing through the Reformation, the Great Awakenings, the Welsh and Korean revivals, the East Africa Revival of the 1930s, and more recent revivals in North America and China.

In a post at The Gospel Coalition blog, Kenneth J. Stewart, author of Ten Myths about Calvinism: Recovering the Breadth of the Reformed Tradition, showed that Presbyterian and Reformed historians used to regularly affirm revival and actually classified the Reformation itself as a revival. Stewart also identified several factors he believes led to the more negative view of revival in Reformed circles today.

In a post titled, “Insignificant Is In,” Collin Hansen mentioned his book while arguing that alongside faithful, plodding, church ministry, we should also pray and long for God to work in extraordinary ways. He echoed revival advocate Martyn Lloyd-Jones, who said, “I do not understand Christian people who are not thrilled by the whole idea of revival.”

R. Scott Clark responded by explaining exactly why the whole idea of revival does not thrill him. Clark is professor of church history and historical theology at Westminster Seminary California, the epicenter for much of the revival criticism alluded to, but not named, in A God-Sized Vision and the blog posts mentioned above.

Now that I have summarized the book and subsequent responses, I will venture one step further and add a few reflections in hopes of advancing the discussion.

First, both the book and responses have helped to illuminate what I see as a false dichotomy that often exists in the minds of Christians. We do not have to choose between the faithful use of ordinary means on the one hand and revival on the other. Woodbridge and Hansen explain:

Revival, in fact, looks a lot like the church’s normal activities as explained in Scripture. The revived church worships, prays, preaches, and evangelizes. Only they do so with a heightened sense of God and greater capacity to embody and proclaim the good news of Jesus (186).

This is the Edwardsian vision of revival. Jonathan Edwards steadfastly believed that the revival he longed for must be a work of God. “There is very much to convince us, that God alone can bestow it, and show our entire and absolute dependence on him for it. The insufficiency of human abilities to bring to pass any such happy change in the world . . . does now remarkably appear.”

However, God ordains that his people use means to bring this great work about. To Edwards revival was not a random event separate from the regular life of the church, but instead a gradual work, which “will be accomplished by means, by the preaching of the gospel, and the use of ordinary means of grace.”

At the end of his critical post on revival, R. Scott Clark admits:

Yes, our sovereign Lord is free to pour out his Spirit in a unique and powerful way. Yes, we ought to pray that the Spirit would go ahead of and operate powerfully through the preaching of the law and the gospel but the results belong to him.

This sounds much like what Hansen and Woodbridge (and Edwards) are urging: not an alternative way of advancing the cause of Christ, but prayer that God would bless the regular prayer, worship, preaching, and witness of the church in powerful, even extraordinary ways.

Second, Clark’s post is titled “It’s All about Eschatology (and History).” He claims that Hansen’s vision of revival is “about triumph in this world and the confusion of heaven and earth. This confusion is manifested in the longing to see Jesus seated on an earthly throne, in Jerusalem, for a 1000 years. It’s also manifested in the desire to return to Christendom.” This is not what Woodbridge and Hansen advocate. In fact, they describe revivals as a “fleeting glimpse of God’s everlasting kingdom” (74), and say revivals are temporary, though with lasting effects, and don’t solve everything.

However, we should not dismiss Clark’s criticism too quickly. While Woodbridge and Hansen may not endorse such a rosy view of revival, several of the leaders and revivals they commend did in fact do so. Edwards and his followers’ expectations of revival were inseparably tied to their postmillennial vision of the future. For example, Edwards famously speculated: “’Tis not unlikely that this work of God’s Spirit, that is so extraordinary and wonderful, is the dawning, or at least a prelude, of that glorious work of God, so often foretold in Scripture, which in the progress and issue of it, shall renew the world of mankind.”

Non-postmillennialists, as most of us are, would be wise to think carefully about this side of Edwardsian revival theology and to consider what aspects we should modify or set aside as we seek to appropriate his vision in a biblical way.

Third, this book and subsequent discussion reminds evangelicals that we need to know our history better. We need to learn about these revivals. Part of Clark’s argument against seeking revival is that the history of revivals “is not nearly as happy as many would like to think.” So is Clark right? What should we think about revival? Was the entirety of the Second Great Awakening harmful to the churches? Was the First Great Awakening merely a promotional invention? Was the Prayer Revival of 1858-59 nothing more than a desperate reaction to an economic crisis? Or was God at work in these events growing and sanctifying his church in extraordinary ways? A God-Sized Vision: Revival Stories that Stretch and Stir helps answer these questions. It is hard to read the stories in this book without being amazed at what God has done and stirred to pray he will do it again. Read the book and see for yourself.

Mark Rogers is the senior pastor of Fellowship in the Pass Church in Beaumont, California. Mark has a PhD in historical theology from Trinity Evangelical Divinity School.