Of the books I’ve read this year, Getting the Reformation Wrong: Correcting Some Misunderstandings is among the most thought provoking. The reason: James Payton Jr. does something in this volume that few other historians have done so well—he tells the Reformation story with careful attention to the larger social and intellectual context, and, in doing so, gives readers an up-close, ground-level perspective. Even if you don’t accept all of Payton’s proposals, the benefit of his approach is that he connects important dots and clarifies several misunderstandings that exist among students of the Reformation.

Payton offers a general overview of the medieval Catholic Church, the varied and complex shape of the Renaissance, the opportunities and challenges facing the Reformers, the Catholic Reformation, Protestant Scholasticism, and, finally, he suggests ways in which the church can benefit from these developments. In Payton’s words:

If we want to listen to and honor the Reformers, we need to know about the setting in which the Reformation arose: how and why the Reformation movement found support, how it unfolded, how it addressed the questions of its day and how it was challenged. We also need to explore how faithfully the Reformation was continued by the Reformers’ successors, how to assess what resulted from it and how to view it in our day. Doing this is similar to what the Reformers themselves did as they surveyed the church in their day and tried to understand how it got that way. This is one way we can be faithful to the Reformers and the Reformation. I trust that this book will be a help to many in this worthy endeavor (21).

Chapter one portrays the general picture of society in the Middle Ages, disavowing the popular notion that medieval life resembled today with religion consigned to a personal, private sphere. According to Payton, “The devastating problems . . . regarding weather, agricultural productivity and disease—all compounded by wars, peasant rebellions, and the uncertainties involved in the emergence of nation states in Western Europe-were not ‘secular’ concerns, unrelated to the church” (24). Practical life issues such as these are shown to be profoundly important, especially the Black Death that “ravaged Western Europe from 1347 to 1351, killing between one-third and one-half of the continent’s population” (26). Payton’s account of its deplorable effect upon families and society will make you grateful for the century into which you were born.

Opening chapters also probe into the thought-world of the medieval period, describing how competing philosophical viewpoints shaped the theological conversation of the day (49). Rife with discontent and desperate for renewal, “the determined cry reformatio in capite et membris—‘reform in head and members’—echoed through the fourteenth and fifteenth centuries. It called for a drastic renewal of Western Christendom ‘from head to toe.’ When the Reformation came in the sixteenth century, it came to soil well prepared for the seed it would sow: Western Europe was looking for answers and direction, and the Reformers offered both” (25). 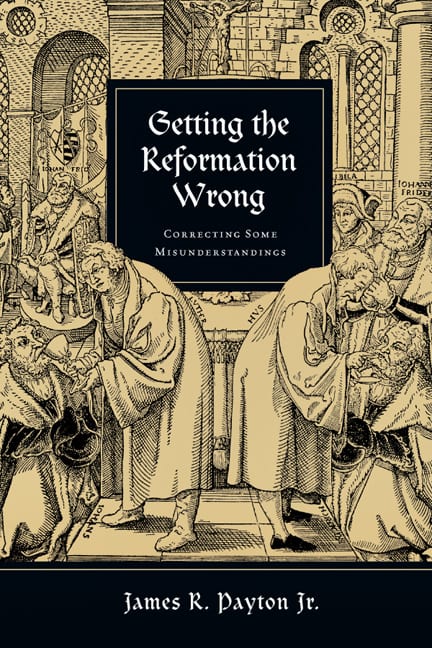 Getting the Reformation Wrong: Correcting Some Misunderstandings

Getting the Reformation Wrong: Correcting Some Misunderstandings

Getting the Reformation wrong is a common problem. Most students of history know that Martin Luther nailed his 95 theses to the Wittenberg Church door and that John Calvin penned the Institutes of the Christian Religion. However, the Reformation did not unfold in the straightforward, monolithic fashion some may think. It was, in fact, quite a messy affair. Using the most current Reformation scholarship, James R. Payton exposes, challenges and corrects some common misrepresentations of the Reformation. Getting the Reformation Wrong.

Payton contends that frustrations, stimulated by socioeconomic tension and religious conflict, make up the wider context of the Reformation story (74). There was also the driving force of humanism that, unlike some of our popular caricatures, possessed a deep concern for religious truth. According to Payton, humanists were the first to flock to Luther’s side, even though they knew very little about him, since they perceived Luther to be like Erasmus and other humanist leaders (80). Payton presents these and other lesser known details of the Reformation to give readers a fresh look at the factors and forces which were at play.

The close reading of certain Reformers such as Luther, Melanchthon, Zwingli, Bucer, Oecolampadius, and Calvin, and the Anabaptist movement, yields a fruitful section on how these individuals and their thoughts interacted with one another. With emphasis upon the areas of conflict and disagreement, Payton gives more attention to the diversity of Reformation thought than to its unity. Eventually, this reflection gives way to an examination of the doctrines of sola fide and sola scriptura. Once again, superficial conceptions are questioned and common misnomers dispelled.

Perhaps the most interesting section of this volume for Gospel Coalition readers is the effect of Catholic Reformers, particularly the Jesuits, on the second and third generations of Protestants. Despite Luther’s excoriating description of Aristotelian methodology as a form of “syphilis” and “theological fornication,” Payton suggests that scholastic theologians such as Theodore Beza, Johannes Wollebius, and the Lutheran Johann Gerhard unwittingly altered the Protestant message by emulating this Catholic emphasis. Payton’s conclusion is bold: “The Protestant scholastics in that regard ‘got the Reformation wrong.’ Those in subsequent centuries, down to the present, who have uncritically looked on the monuments of the Protestant scholastic period as the Reformers’ teaching have also thus managed to ‘get the Reformation wrong’” (209).

While most historians recognize some degree of disparity between the first generation of Reformers and their “scholastic” successors, Payton appears to overstate his case, drawing too sharp of a distinction between the methods and conclusions of these movements. If there is one thing we have learned from Reformation scholars such as Richard Muller, David Steinmetz, and the late Heiko Oberman on this point, it is that the lines of continuity and discontinuity were not so clear. In other words, Melanchthon and Bucer were not averse to systematizing doctrine and later “scholastic” theologians were also concerned with personal faith.

Despite some of these differences concerning Payton’s interpretation of scholasticism, there is still great value in this volume. His final three chapters are concerned with how the church can reclaim the Reformers legacy of pursuing a gospel-centered, Scripture-saturated, historically accountable, always-reforming faith. I dare not give away Payton’s punch line except to say that the historical perspective offered by this section promises to serve the biblically principled, life transforming Reformation that we all desire.