In our American culture that revels in the public humiliation of others, we often miss the stories of how children are affected by these scandals. Cue Fall to Grace: A Revolution of God, Self, and Society. Jay Bakker uses humor to expose the hurt of his family’s public disgrace, and his style is disarming, hilarious, and enjoyable. Classic self-deprecating wit and images like chubby white kids auditioning to play him in made-for-TV-movies or Michael Jackson dangling babies makes this book a hilarious read.

As you dig into Bakker’s book, however, the jokes become less funny and more heartbreaking. His televangelist father’s adultery and incarceration, his mother’s drug addiction, and their divorce before he turned 13 were sufficiently scarring. Watching his life parodied on Saturday Night Live deepened the wound, and his painful childhood led to a substance-abusing adolescence. He mentions getting saved, “what seemed like every other week,” but it never stuck: change never happened for Jay, Christians kept lobbing hate-bombs into his world, and he ultimately concluded that God was through with him (11). Bakker eventually emerges from his bad habits and the pull of his father’s soft version of the prosperity gospel (3). But he does so with his own distortion of the gospel.

Bakker distorts the gospel through the error of overreaction. Overreaction leads to reduction, which leads to a weakened gospel. Responding to the fundamentalism of his youth, Bakker has reduced Christianity to being friendly, and God’s grace to a father’s patience. His book is filled with helpful one-liners-“dis-grace” has no place in our relationship with God (24), salvation is not found in any set of rules (35), Adam introduced sin to the world and Jesus took it away (46), we can’t win God’s approval by performing any action (56). But these one-liners are only half-truths and are, ultimately, unhelpful. Bakker reduces God from the holy king of the universe into our cosmic buddy-helper.

Bakker warns that we play “fast and loose with God’s reputation” when we “make up rules that have no basis in Christ’s teaching” (68). But he frequently ignores his own warning. Bakker may not create new rules for Christians to follow like his fundamentalist forbears did, but he twists words to mean something Christ never did. For instance, defining God’s work of restoration as “helping people who falter” (137) gives an inaccurate picture of who God is and the magnitude of the work he is doing. If Bakker’s problem was with playing fast and loose with God’s reputation, he would reject redefining Jesus’s words just as much as he rejects adding to them. In both examples (adding to Jesus’s teaching and redefining it), people are rejecting Jesus’s gospel as being insufficient. 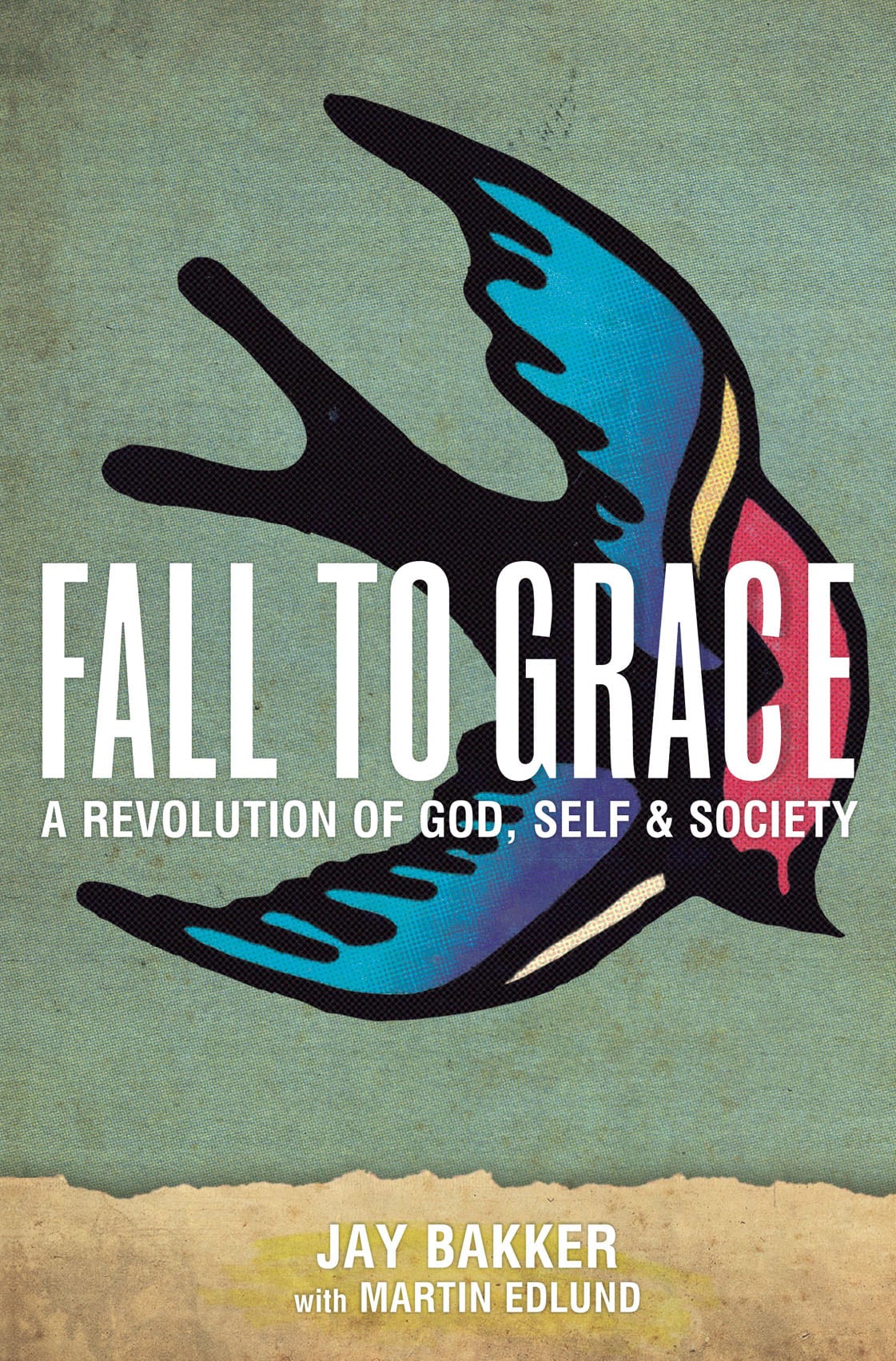 Fall to Grace: A Revolution of God, Self, and Society

Fall to Grace: A Revolution of God, Self, and Society

If anyone ever had a reason to leave the faith, Jay Bakker did. The son of mega-televangelists Jim Bakker and the late Tammy Faye Messner, Bakker was only 11 years old when his parents’ PTL ministry was caught in a high-profile accounting fraud scandal, and his family was devastated by his father’s affair and his parents’ subsequent divorce.

A disillusioned Bakker turned to drugs and alcohol and left his childhood beliefs behind. But along the way, an interesting thing happened: Bakker came to understand, through all his pain, what God’s grace was really all about.

When we are talking about the gospel, we are talking about three things: God’s kingdom (life with God), God’s cross (all that Jesus did and accomplished) and God’s grace (this is a free gift). Bakker chucks the first two aspects of God’s gospel and builds his entire theology around the grace of God. This sounds fine at first, but then you realize he has thrown out the life-changing, Holy Spirit-empowering reign of God’s kingdom made possible through Jesus’ cross. Of course we embrace God’s grace, but at the end of the day, if you cut off the grace of God from the cross, you end up with a sentimental, sappy Christianity that distorts who God is. If you cut God’s grace off from the kingdom of God and the cross of Jesus, we are left only with news, not good news.

At the heart of Fall to Grace is not simply the grace of God but Bakker affirming homosexuality. It takes him roughly 150 pages to get there, but that’s what he is saying. When compared with many of today’s most popular sins, evangelicals certainly give disproportionate attention to homosexuality. Bakker responds to that by overreacting in the opposite direction. It’s awful that Bakker was hurt, but that doesn’t justify his reducing the gospel to say that God loves everybody regardless if whether or not we have room for him in our lives (181). Bakker tries to comfort the reader by assuring him that we are all God’s children.

When Bakker tells us not to “interpret God’s gift of grace through Jesus as being all about atonement,” (73) he seems to be whispering that there is nothing to atone for. If there is no right or wrong, there is no difference between love and hate. Bakker thinks he is providing encouragement, but he is actually denying everyone the good news that Christ has achieved a new way of living for us. Life with God means being empowered to handle sex, money, and our relationships in a new, God-honoring way. To speak so quietly on the cross of Christ and God’s kingdom is not only surprising, it’s disturbing.

We need to acknowledge that many evangelicals prefer scoffing about homosexuality over stepping into the mess of God’s redemption. Even so, we can’t make the mistake Bakker has made and throw out the grace of God that not only saves us from our sins but also empowers us to overcome them. We want to hear “success” stories but not the struggles of the person battling the civil war of the soul like Paul did in Romans 7. But this book will not help us. The grace that Bakker so passionately wants to extend he actually denies by his reductions and omissions. Having reduced the gospel, he has weakened it and left readers, in fact, with no gospel at all.

Daniel Montgomery is the founding pastor of Sojourn, where he describes his role in the words of Count Zinzendorf, “Preach the gospel, die, and be forgotten.”