What ever happened to Ted Haggard? Does anyone care? It really doesn’t matter that much, after all, because he disqualified himself from ministry. We can all write him off. He was sent packing and that’s that, right? Not according to Michael Cheshire in his book Why We Eat Our Own.

Sometimes to make a point one must abandon nuance and subtlety. Such is the case with this book. In its pages Cheshire, founding pastor of The Journey Church in Conifer, Colorado, aggressively challenges conventional and habitual church methods for dealing with sinners. Why does the church treat its own sinful people so badly? More specifically, why, when we serve such a loving and forgiving God, are God’s people so often angry and divided? These are the questions Cheshire sets out to answer. He spends less effort on systematic argumentation or thoughtful persuasion than he does on taking his theses and nailing them loudly to the chapel door.

He sets the stage by describing how a life-threatening kidney disease changed the course of his ministry. During the days waiting for the prognosis of death or recovery he began to evaluate his life—what was good and what was a waste. As he puts it, “I realized I carried a lot of anger about how Christians treated each other, myself included.” As he evaluated his time in ministry with his wife they realized so much would be easier if they left. He could put his kids in public school without judgment, his kids wouldn’t need to hide their music or movie preferences from churchy folks, and he could generally be himself. So he decided, should he recover, that he would leave the ministry.

Cheshire did recover. He is still a pastor. What happened?

As Cheshire describes it, God began to doctor his heart. Questions like When did outside of God’s family become the place of peace and hope? And why was church a bad place to attend and an even worse place to serve? rattled around his mind. He realized that leaving wasn’t the solution but rather leading the church as his real self instead of behind the mask of expectations wrapped up in “Pastor Mike.” His staff would lead with authenticity. If sin was visible they would confront it in each other or in the congregation, but that same sin would not cost people their membership or their jobs if they repented and worked to fix it. Frankly, it all sounds a bit “rah rah” and idealistic.

But doesn’t it also sound appealing? A church where sin is recognized and confronted by peers and leaders alike, no matter who the sinner, but where grace is big enough to overcome it? Where judgmentalism has no place and people don’t cotton to phoniness? Most importantly, a place where repentance actually leads to restoration instead of ostracizing? Of course it does. That’s what Why We Eat Our Own is about: the transformation of church leaders, and through them churches, to places of such powerful grace.

Cheshire writes in a way that matches his demands. He is open about his own failures and public about his church’s efforts to embrace the fallen. The most pointed of these stories is the one I mentioned up front: his connection with Ted Haggard. If Haggard has been broken, has been forgiven by God and his family, why is he useless to the church asks Cheshire? (Cheshire testifies based on their relationship that Haggard is repentant and restored, but he doesn’t offer much in the way of details about Haggard’s story, the process of restoration, or where things stand with some of the lingering questions dating back to his fall from grace.) The same goes for fallen people the church over. “Explain why God used Peter after such a massive failure. Don’t worry I’ll wait,” Cheshire writes. Well? Why is it that God can use Peter, the hot-headed, self-serving, three-times denier, but sinners, even repentant ones, in the church are unworthy of service or maybe even fired or excommunicated? 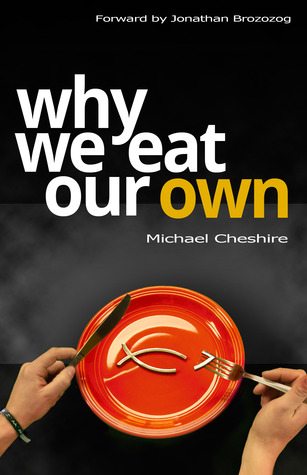 “That is the reason I will not become a Christian. . . . That guy said he was sorry a long time ago. [You] Christians eat your own. Always have, always will.” This is what an unbelieving friend told Cheshire once when seeing how believers responded to Haggard. And he’s right about the church’s response too often. The disconnect between God’s restorative grace and the church’s can be Grand Canyon-esque. And it can ruin our effectiveness.

Not Pleasant but Powerful

Why We Eat Our Own takes the church behind the woodshed, makes it cut its own switch, and then thrashes its backside. It’s not a pleasant experience, but boy, it’s a powerful corrective and, in many instances, a deserved one. Why don’t churches weak in one area reach out to strong ones for help? Why is ministry suffering? Maybe because the church fires or disqualifies all the young, developing leaders who stumble. What if the members with lots of money were corrected in the same manner as those without? What would happen if we cut gossip off mid-sentence when we heard it? If we valued highly everyone God created, could judgmentalism survive?

Cheshire writes with raw style and content. He is sarcastic and blunt. He overstates some points and underplays others. His prose is informal and woven loosely. He shoots sacred cows and makes burgers out of them. He rips the masks off the role of pastor and reveals the scarred and battered face that hides behind it. This style will undoubtedly annoy or upset some readers, as will his unabashed support for Ted Haggard.

But what if that annoyance or anger is a sign that the reader needs what Cheshire is saying? Maybe it is self-righteousness or pretension. Maybe it’s fear or pride leading to paralysis. Regardless, it behooves readers to look past weaknesses, perceived or real, and immerse themselves in the message of this book. While not a work on Christology, Why We Eat Our Own imitates Jesus’ love for the tax collector and sinner and looks out for his bride. While not theology proper, it points people to the character of God. And for these reasons it is worth reading.

Barnabas Piper (blog, Twitter) works in leadership development at LifeWay Christian Resources in Nashville, Tennessee. He is author most recently of The Curious Christian: How Discovering Wonder Enriches Every Part of Life (B&H, 2017).