Hugely dramatic events tend to take over the meaning of the names of the places that witness them. Whatever a place-name’s literal meaning might be, its cultural and historical significance ends up being tied to what happened there. Take Hiroshima. It might literally translate as “wide island,” but that’s no longer its cultural meaning for us. It has become a byword for the first-ever application of atomic warfare.

The same is sadly true for any number of places that have borne witness to awful tragedy. We think, even just recently, of Newtown, Connecticut; of Fort Hood, Texas; of San Bernardino, California. And now, as well, we think of Orlando, Florida.

It’s already been several weeks since a gunman opened fire in a gay nightclub, killing 49 people and injuring 53 others. The news cycle has moved on. Flags are back at full mast. But the aftereffects of this tragedy continue to be widely felt. Not just in the immediate families and communities of those taken from them, but in the wider culture too.

Those of us not in the LGBTQ community often don’t appreciate how frightening the world can be for them. Although Western culture has changed dramatically in recent years, and although it can feel as though the pendulum of cultural power has swung firmly in the direction of LGBTQ rights, in many places on the ground life can still feel threatening. Many spoke of the utter shock of Orlando. This club, after all, was for them the place of ultimate safety, the one place they felt they could truly be themselves and accepted. If not there, they might ask, then where? 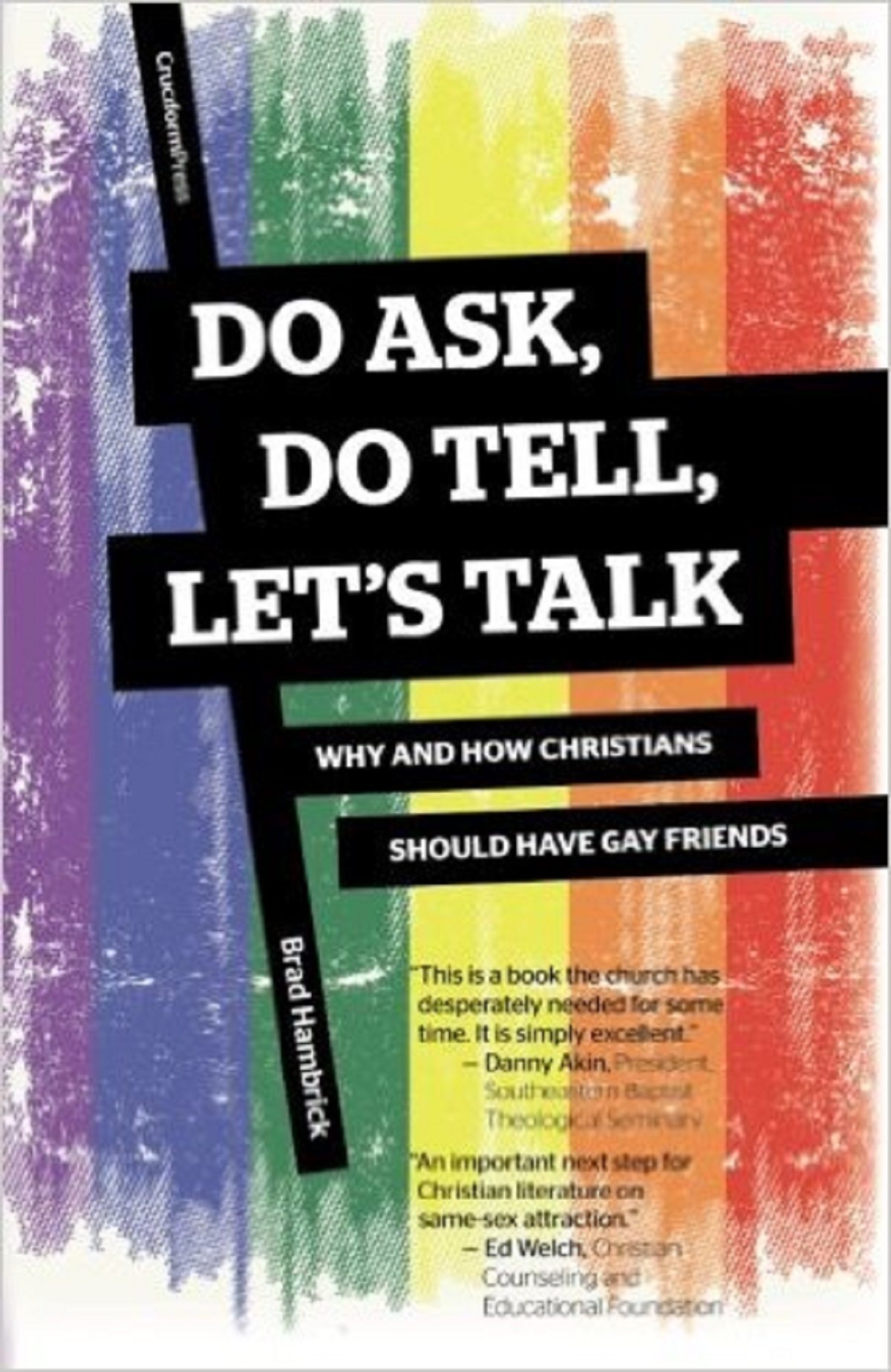 Do Ask, Do Tell, Let's Talk: Why and How Christians Should Have Gay Friends

Do Ask, Do Tell, Let's Talk: Why and How Christians Should Have Gay Friends

But it’s not just the LGBTQ community that has been shaken up by recent tragic events. One friend told me how a conservative family member had, for the first time and as a result of Orlando, realized that gay people really are people. Not just a demographic. Not just a sexual minority. Not just a lobby. But actual men and women, flesh and blood. We might be horrified he ever thought otherwise, but I suspect he’s not alone in having inadvertently dehumanized the gay community. We tend to do it to any group whose views we don’t agree with.

All of which makes Brad Hambrick’s new book, Do Ask, Do Tell, Let’s Talk: Why and How Christians Should Have Gay Friends, all the more timely and urgent. Hambrick’s goal is clear and well-stated: He wants to help Christians have gay friends. The goal of this friendship isn’t to “represent an agenda but to understand a person. Friendship is what protects good points from becoming gotcha moments” (13). As one friend put it to me recently, “We shouldn’t befriend gay people because they are gay; we should befriend gay people because they are people.”

We need to be clear on this so that we understand what Do Ask, Do Tell, Let’s Talk is not. It’s not a handbook for what the Bible says about homosexuality. Hambrick assumes his readers are already clear on that topic. He has been criticized for not covering the biblical ground on homosexuality, or for providing a biblical case for why same-sex relationships are not pleasing to God. But it seems unfair to criticize a book for not being something it was never intended to be. It’s not designed to be the book that helps you form a biblical understanding of homosexuality (for that I’d suggest Kevin DeYoung’s What Does the Bible Really Teach About Homosexuality [review]). It’s really designed to be the book you read after that one. And, as such, it’s excellent.

Hambrick’s book is full of practical insights and suggestions on building genuine and fruitful friendship. There are some great observations:

There’s reassurance for those of us who fear we might not have the right words: “It is good for us to have conversations when we don’t know what to say. This is part of the essence of being a growing person” (38).

And there are challenges aplenty.

I wish this book could have assumed more common sense on the part of the reader. But I suspect common sense isn’t that common these days. Many Christians don’t realize just how important it is to spend time listening carefully to the experience of our gay friends before presuming to know what best to say to them, or that the experiences of gay people can vary hugely. Knowing one person’s experience doesn’t mean we now know everyone’s.

I suspect a significant part of our problem in engaging well is that we tend to abstract the issue of homosexuality out of a gospel framework as though it were an utterly unique thing. An experienced member of our church’s welcome team anxiously asked me recently what to do if gay people arrived at church. My response was to ask what we do any time anyone arrives at church, and to do the exact same thing—welcome them, hand them a bulletin, show them to some seats, introduce them to others, and so on. What most troubled me was that this was a mature Christian asking me this question.

If the word ‘Orlando’ remains connected to the worst tragedy the gay community has seen in recent years, let’s hope it also galvanizes Christians to change their posture from one of critical distance to close friendship.

As individuals and churches I suspect we need all the help we can get. In any case, so much of Hambrick’s wisdom comes from having genuinely deep friendships in the LGBTQ community. Those of us who lack such friendships, and wonder what all the fuss is about, are probably the ones who most need to read this book.

If the word “Orlando” remains connected to the worst tragedy the gay community has seen in recent years, let’s hope it also galvanizes many Christians to change their posture from one of critical distance to close friendship. At just 122 (small) pages of text this book isn’t going to intimidate anyone, and if you take its message to heart, it will do you—and potentially a lot of other people—an enormous amount of good.