Becoming like Jesus. Walking in the Spirit. Growing in grace.

How are such feats to be accomplished? Answers abound. In the world of contemporary publishing, few topics are as filled with fluff as Christian living and sanctification.

For longtime Reformed readers, Ferguson has become almost synonymous with the doctrine of sanctification. Whether it’s mining the riches of the Puritans in John Owen on the Christian Life, explaining the basics in Grow in Grace, examining the law and grace debate in The Whole Christ [20 quotes], or contrasting the nuances of Reformed spirituality with Lutheranism in his contribution to Christian Spirituality—few guides are as reliable as Ferguson, now preacher at St. Peter’s Free Church of Dundee in his native Scotland, where he recently returned after spending much of his adult life in the United States.

When it comes to the Christian life, few guides are as reliable as Sinclair Ferguson.

Ferguson’s latest release is Devoted to God: Blueprints for Sanctification. For those acquainted with his previous works, this will offer much that’s familiar. He confesses on page one that the book “contains no novel teaching” (ix). And yet with its length (296 pages) and rigorous detail (his description of the book as a “manual” feels accurate, xii), Devoted to God might end up being Ferguson’s most definitive work on the subject. 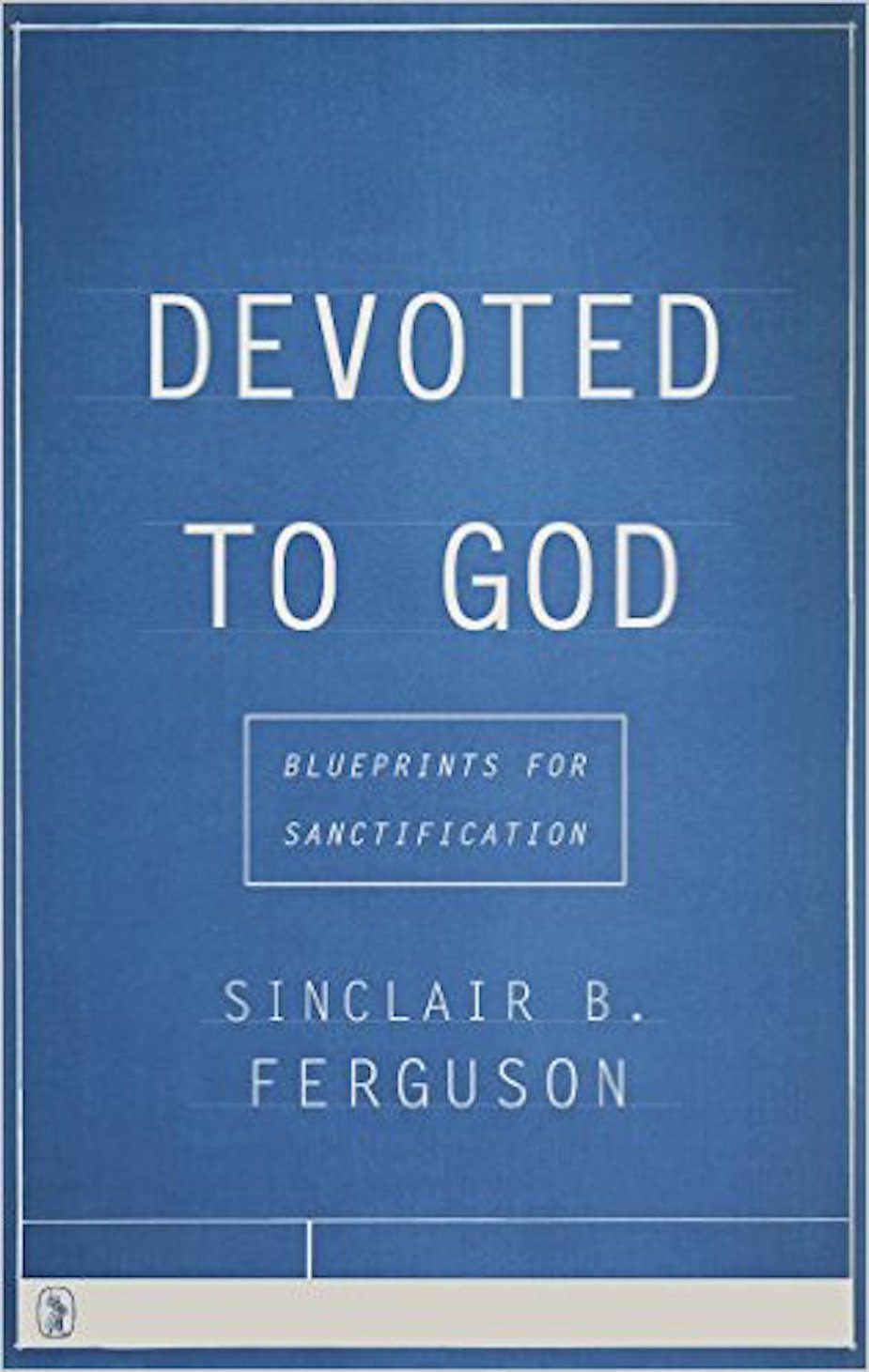 Devoted to God: Blueprints for Sanctification

Devoted to God: Blueprints for Sanctification

The main title echoes Ferguson’s definition of holiness as pure devotion rather than (as is commonly thought) separation. Even before there was a creation for the holy Trinity to be separate from, the three persons were still holy in their pure devotion to one another. Holiness is the same for us—pure devotion to the triune God, which in turn leads us to separate from sin (2 Tim. 2:19).

But the heart of the book lies in its subtitle: “Blueprints for Sanctification.”

With the exception of five appendices (totaling 40 pages), Devoted to God consists entirely of biblical exegesis—exegesis of what Ferguson calls “blueprint passages.”

The Bible is a big book, and it has a lot to say about sanctification. But some passages are clearer, more foundational, and more comprehensive than others. These are the blueprint passages, and Ferguson has narrowed his list to 10:

Ferguson’s goal over 10 chapters is to help us master these passages, and by doing so to lay a foundation for a life of true holiness (ix).

The exegetical nature of the book makes it a valuable source for Bible teachers, preachers, or small-group leaders. I choose the word “source” deliberately, because at well more than 200 pages of exegesis, this isn’t a book that can be breezed through. A better idea would be what Ferguson himself suggests: take a handful of young Christians and use the book to help walk them through some or all of these blueprint passages (x).

It’s easy to complain about the book’s lack of canonical breadth. A quick glance shows that all ten of the blueprint passages come from the New Testament—nine from the epistles, seven from Paul, four from Romans alone. I wouldn’t be surprised if the contemporary Reformed penchant for the Pauline played a role here, and one wonders if the book might’ve profited from a bit more literary diversity (perhaps Ezekiel 36:22–27, Psalm 1, or John 15:1–17).

In Ferguson’s defense, however, I can’t think of any major concepts in those texts that are absent in the ones he does treat. And given his goals and theological emphases, there seem to be plausible reasons for the Pauline glut. At any rate, I found it hard to read his expositions of Paul and feel dissatisfied.

Not a How-To Book

In the main these [blueprint] passages focus on teaching that is given in the indicative rather than in the imperative mood—passages that describe sanctification rather than passages that command it. This is not so much a “how to” book as it is a “how God does it” one. It is not dominated by techniques for growing in holiness. (x)

In short, this is primarily a doctrinal book. It’s not that Ferguson avoids discussing commandments—he devotes an entire chapter to the law of God. Neither is he reluctant to discuss changes in outward behavior—there’s plenty here about “putting off” and “putting on.” It’s simply that Ferguson chooses to major on changes in our heart motivation as the key to outward change:

The key test of any formula for sanctification is: Does this enable me to overcome the influence of sin, not simply in my outward actions but in my inner motivation? And, in particular: Does it increase my trust in and love for the Lord Jesus Christ? Is it a Christ-centered sanctification I am being offered? (119)

This explains the book’s doctrinal focus. While not denying the use of the law as a guide for sanctification, Ferguson realizes that the power and motivation to obey the imperatives doesn’t come from the imperatives themselves. It comes from the gospel indicatives, in which God gives us his Son and his Spirit, “his two most precious gifts” (151). The facts (indicatives) ground the commands (imperatives). This biblical logic forms one of Ferguson’s main emphases (see esp. 32–40).

When we ‘get’ Christ by faith, we ‘get’ everything that is in him to pardon, liberate, and transform our lives.

But without doubt, the central point stressed by Ferguson is the believer’s union with Christ (111). “This is the heart of sanctification” (55). This is the “strength of holiness” (55). This is what “we need to be reminded of . . . until we are almost exhausted hearing it” (56). “When we ‘get’ Christ by faith, we ‘get’ everything that is in him to pardon, liberate, and transform our lives” (62). I challenge any Christian to read chapter 3, “Prepositions of Grace,” and not feel freshly hopeful.

As a millennial pastor, I confess there are many theologians whose writing I find more engaging than Ferguson’s. His style sometimes feels stodgy, and his illustrations almost never feature movies I’ve seen or songs I’ve heard.

But what he lacks in coolness he makes up for in warmth. Trendy or not, I’ve found few theologians as consistently solid and dependable as him, and this book could end up being his crowning achievement.

This book could end up being Sinclair Ferguson’s crowning achievement.