This is a first for me—writing a book review while flying over the northern reaches of the Atlantic Ocean. I’m returning to the United States after responsibilities in the United Kingdom, speaking mostly to pastors and other Christian leaders. Everywhere I went, from central London to rural Kent, the same urgent question was asked: “Can religious liberty survive the LGBTQ moral revolution?”

Winston Churchill famously believed in the basic cultural unity of those he called the “English-speaking peoples,” meaning, most specifically, Britain and the United States. We’ve historically shared a basic commitment to moral truths including human dignity and liberty, and these commitments have been enshrined in our laws and social life. But Christians in both countries now face the prospect of a disastrous collision between the new sexual liberty prized by the LGBTQ revolution and religious liberty—long recognized in the United States as the first and most foundational freedom.

Long before the Obergefell decision legalized same-sex marriage, the inevitability of the collision was anticipated by both sides in the debate. LGBTQ advocates had already made clear their intention to advance from the legalization of same-sex marriage to press for the inclusion of sexual orientation and gender identity (SOGI) in all relevant civil-rights laws and regulations. Even then, the collision with religious liberty was inevitable. Even then, we were warned religious liberty would have to give way to newly constructed and judicially mandated sexual liberties.

In the brief two years since Obergefell, we have seen Christian cake bakers, wedding photographers, florists, county clerks, judges, and a host of others face civil—and in some cases criminal—prosecution. The Religious Freedom Restoration Act (RFRA), passed in 1993 with no negative votes in the House of Representatives and only three in the Senate, is now seen by the revolutionaries as radical legislation that must be curtailed, if not overthrown. Religious adoption agencies and schools are now warned to either surrender to the revolution or, with the passage of SOGI laws, face penalties or extinction.

Two Sides of the Debate

Is it too late for a debate? The lines of argument are hardening, to be sure. This is partly attitudinal, with some LGBTQ advocates contending that reverse discrimination against conservative Christians is to be celebrated. The moral progressives, as they see themselves, are in no mood to compromise. 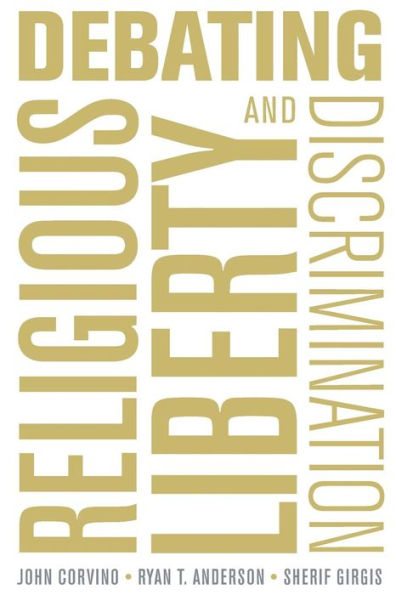 Debating Religious Liberty and Discrimination—released virtually on the second anniversary of Obergefell—is a state-of-the-art presentation of both sides of the argument. The authors are current, candid, and clear. One on side, philosopher John Corvino argues for SOGI laws and, while claiming to respect religious liberty, openly calls for RFRA to be revised and for religious liberty claims to be demoted from the standard of “strict scrutiny” to “heightened scrutiny.” That may sound innocuous, but it means government authorities (specifically judges) would have greater power to disregard claims based in religious liberty.

On the other side, Ryan T. Anderson of the Heritage Foundation and legal scholar Sherif Girgis make the case for religious liberty, against SOGI laws, and against what they call the “Puritan mistake.” As they see it, the LGBTQ advocates, like the Puritans who fled Europe for the New World, are now making the mistake of protecting their own liberties, while denying liberty to others.

Anyone who has followed these debates closely will recognize the names. Corvino, who identifies as gay, has been influential in framing the arguments for LGBTQ rights and same-sex marriage. Anderson and Girgis, on the other hand, are equally known for their defense of traditional marriage and religious liberty. For the most part, the arguments are exactly what you would expect—and what we now need, if we’re to grasp the challenges ahead.

Anderson and Girgis—who with Princeton’s Robert P. George offered the best natural law and legal argument against same-sex marriage as that question was before the Supreme Court—offer a brilliantly comprehensive argument for a policy that would protect religious liberty and conscience. They argue against SOGI laws and lay bare the reality of such measures—the curtailing of religious liberty and convictional integrity. Religious conscience will be trampled.

Great moral debates ride on arguments, but they’re decided on emotion and moral intuition. . . . The winning side in a moral crisis will never win on argument alone. Moral sentiment is more basic than moral argument.

Corvino doesn’t believe the consciences of those religiously opposed to celebrating same-sex marriage and the full LGBTQ spectrum can be fully protected under SOGI laws. To the contrary, he candidly sees the conflict—but he just as candidly defends the argument that LGBT persons deserve such protections, even with the cost to other citizens. In the end, Corvino isn’t even sure why religion should be treated as a special category.

Great moral debates ride on arguments, but they’re decided on emotion and moral intuition. That doesn’t mean arguments don’t matter—they assuredly do. What it does mean is the winning side in a great moral crisis will never win on argument alone. Moral sentiment is more basic than moral argument.

In Defense of Religious Liberty

I agree with Anderson and Girgis, not only in the framework of their major arguments, but also with their most fundamental judgments and concerns. They represent stellar argumentation, blending the best natural law arguments with logic, history, and legal tradition. They’re correct on every major point, and convincingly so. They win on points, hands down. Further, they see through the fallacies of the arguments for SOGI measures.

They’re also deeply committed to human flourishing, and they surely know this sexual revolution—right down to same-sex marriage and SOGI laws—can’t deliver what the LGBTQ community hopes to gain: moral legitimacy. In fact, that’s the argument I wish they had made more directly and passionately.

No one has made the case for protecting religious liberty in this context so well, or seen the danger more accurately. Anderson and Girgis are exactly the team I would want preparing the seminal legal brief on these questions.

But the majority opinion in Obergefell, as in so many prior cases, didn’t reflect the victory of a superior legal, constitutional, or philosophical argument. We know the pattern all too well. The justices in the majority simply trumped the Constitution with their own moral judgment. The majority opinion is, more than anything else, a reflection of the justices’ moral intuition and sentiment. Over and over again, that’s where the big battles are lost.

In Defense of LGBTQ Rights

This brings me to Corvino’s essays. Above all, Corvino must be an effective teacher in the classroom. He makes his arguments with verve and, most importantly, with passion.

Anderson and Girgis complain, quite rightly, that Corvino doesn’t even offer a comprehensive defense of SOGI laws, nor does he always keep his arguments straight. But he’s not trying to win on comprehensiveness and consistency. He intends to win on passion and strategic candor. He’s stunningly candid when he calls forthrightly for RFRA to be revised in order to lower the protection of religious liberty. No evasion there. He even dares to argue that, since most federal judges have undermined RFRA by applying this lower standard, RFRA should be revised to match their subversion of the statutory language.

Anderson and Girgis offer an important argument as they contend for respect for religion and link religious conviction to moral integrity:

Our own rationale centers on the fact that religion and moral integrity are basic goods, to which the state denies citizens adequate access when it coerces conscience, which it shouldn’t do needlessly.

Corvino counters that this would open the door to countless conscience exemptions at the expense of what he defines as civil rights.

Corvino drops a few bombs along the way, leaving little mystery as to what his position—if adopted as law and policy—would mean. Christian schools can exist and operate by conviction on LGBTQ issues but must forfeit their tax-exempt status. Christians operating in the public square or in business would have no specific protections at all—at least not on religious liberty claims.

There’s one clash of arguments in the book that may, over time, be seen as most important. Corvino presses the case for what he calls dignitary harm as differentiated from material harm. His description of dignitary harm is quite expansive:

Don’t miss what Corvino claims here: even making someone “feel [morally] inferior, intentional or not” constitutes harm. As Anderson and Girgis understand, that means the end of religion, particularly any religion based on a claim to revelation. Taken to its logical conclusion, it means the end of all moral judgment. In their words:

Religious freedom includes nothing if not the rights to worship, proselytize, and convert—forms of conduct (and speech) that can express the conviction that outsiders are wrong. Perhaps not just wrong, but deluded about matters of cosmic importance around which they have ordered their lives—even damnably wrong.

Of course, both sides in a moral conflict see the other side’s position as morally inferior. But make no mistake: this idea of dignitary harm may be the biggest single threat to religious liberty in this entire book—and in our immediate future.

This idea of dignitary harm may be the biggest single threat to religious liberty in this entire book—and in our immediate future.

Debating Religious Liberty and Discrimination is timely and important, and never more so than when the debate turns to the argument over dignitary harm. The book also reveals our predicament. We have no choice but to make the right arguments and to make them well. Anderson and Girgis make their arguments extremely well, and they’re the right arguments. But Corvino asserts the case for SOGI laws, openly at the expense of religious liberty, and adds the category of dignitary harm. Thus he radically expands the reach of his argument. And he appears quite confident his side will win.

The three authors begin by asking, “Is it possible to find common ground on these issues?” By the end of the book, readers will likely conclude, with sadness, that there’s little common ground to be claimed.