So what did I do last summer vacation? I continued to do something that I started January 1 of this year. Late last fall I came upon a plan for reading through all of John Calvin’s Institutes—his four-volume, 1,500-or-so-page systematic exposition of the teachings of the Christian faith—in one year. Calvin and Martin Luther together were the two leading lights of the Protestant Reformation in the 16th century. Today, however, Calvin has a dismal reputation as a pinched, narrow-minded, cold, and cerebral dogmatician.

I knew much of this image was caricature, and, while over the years I had read a good deal of the Institutes, I treated the books like an encyclopedia or dictionary that one dipped into to learn about specific topics. I had never read it straight through, consecutively, until this year when I began the program, which allots an average of six pages a night, five nights a week, for an entire year. Almost immediately I was amazed by several things.

First, it is not just a textbook, but also a true work of literature. It was written in Latin and French and is a landmark in the history of the French language. Calvin was a lawyer and seems at time to relish debate too much (a flaw he confesses in his letters). But despite such passages, even in English translation it is obvious that this is no mere textbook, but a masterpiece of literary art, sometimes astonishing in its power and eloquence.

Second, it is nothing if not biblical. Even if you don’t agree with what Calvin is saying, you will always have to deal with one or two dozen texts of Scripture, carefully interpreted and organized as he presents his case to you. To describe these volumes as “theology” or “doctrine” is almost misleading—-it is mainly a Bible Digest, a distilled readers’ guide to the main teachings of the Scripture and how they fit together.

Third, the Institutes are, I think, the greatest, deepest, and most extensive treatment of the grace of God I have ever read. I was struck by how many times Calvin tells us that the foundation of real Christian faith is both grasping with the mind and sensing on the heart the gracious, unconditional love of God for us in Jesus Christ. Over and over again he teaches that you are not truly converted by merely understanding doctrine, but by grasping God’s love so that the inner structure and motivation of the heart are changed.

So in Institutes I.3.1 he argues that, while you may know a lot about God you don’t truly know God until “reverence [is] joined with love of God which the knowledge of his benefits induces. . . . Unless they establish their complete happiness in him, they will never give themselves truly and sincerely to him.” In other words, you don’t have true saving knowledge of God until you long to obey him, out of a desire to please and delight him because you are pleased and delighted with him for his grace. Calvin adds that in a Christian soul “this restrains itself from sinning, not out of dread of punishment alone; but because it loves and reveres God as Father. . . . Even if there were no hell, it would still shudder at offending him.” (I.3.2 ) 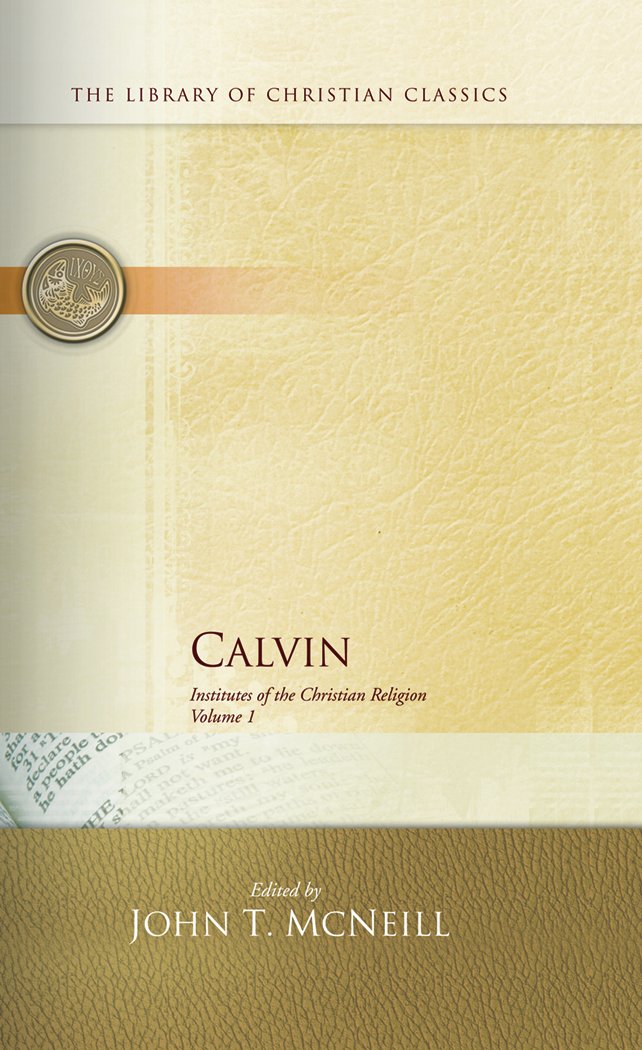 This is the definitive English-language edition of one of the monumental works of the Christian church. All previous editions—in Latin, French, German, and English—have been collated; references and notes have been verified, corrected, and expanded; and new bibliographies have been added.The translation preserves the rugged strength and vividness of Calvin’s writing, but also conforms to modern English and renders heavy theological terms in simple language. The result is a translation that achieves a high degree of accuracy and at the same time is eminently readable.

When Calvin comes to his three chapters on what it means to live a Christian life (III.6–7), again grace is at the forefront. He taught that the briefest statement of the Christian life is this—“You are not your own; you were bought with a price” (1 Cor. 6:19-20). Because you were saved by sheer grace (“you were bought with a price”), now your new principle of life is “you are not your own.” You no longer live for yourself, but for God and for your neighbor. All of the Christian life is the working out of that verse, that grace, and that new principle of joyful self-donation.

When Calvin applies this principle of gracious self-donation to our relationships with other people, he argues that we should treat even those who deserve nothing but disdain as if they were the Lord himself.

Say [about the stranger before you] that you owe nothing for any service of his; but God, as it were, has put him in his own place in order that you may recognize toward him the many and great benefits which God has bound you to himself. . . . You will say, “He has deserved something far different from me.” Yet what has the Lord deserved? . . . Remember not to consider men’s evil intention but to look upon the image of God in them, which cancels and effaces their transgressions, and with its beauty and dignity allures us to love and embrace them.” (III.7.6)

When Calvin comes to his well-known doctrine of predestination, it is important to see where he places it. He does not deal with the doctrine under Book 1 where he treats God, or even Book 2 where he addresses sin and Christ. He waits until Book 3, which is about “How We Receive the Grace of Christ” through the Holy Spirit. Calvin insists that the opposite of the doctrine of predestination is not the idea of free will but the teaching that we are saved by our good works. He argues forcefully that, unless you see your saving faith is a gift from God to you, not from you to him—you have not yet grasped how free his grace is. You will ever so slightly believe that you are a Christian because you were more humble, open, and repentant than those who have not believed. But, Calvin reasoned, if you see your salvation is 100 percent by grace you will embrace and be both humbled and comforted by the truth of predestination.

Last (and here our modern evangelical terminology fails us) Calvin’s writings are astonishingly “doxological.” We might be tempted to say “inspirational” or “devotional” or “spiritual,” but to use such Hallmark greeting card phrases doesn’t do them justice. Calvin’s writings don’t read at all like a theological treatise, but like a man’s meditating on the Scripture before God. The language is filled with reverence and awe, and often tenderness. That means that, despite the close reasoning of so many parts of the material, Calvin was all about the heart.

Indeed, he taught that our biggest problem is there. “For the Word of God is not received by faith if it flits about in the top of the brain, but when it takes root in the depth of the heart . . . the heart’s distrust is greater than the mind’s blindness. It is harder for the heart to be furnished with assurance [of God’s love] than for the mind to be endowed with thought.” (III.2.36)

To furnish our hearts with more of that assurance is the ultimate purpose of the Institutes, and I can say, personally, that it is fulfilling its purpose in me this year.

5 When God Says No to Your Earnest Prayers