American culture has likely never been more pluralistic than it is today. We swim in an ocean of rival worldviews each time we exit our front door—and sometimes even within our homes. Furthermore, we live in a secular age where religion has been displaced from the center, and secularism is increasingly the default factory setting of our cultural narrative. In such a context we lack consensus on what constitutes the common good.

Yet Jesus Christ remains the way, the truth, and the life (John 14:6), and the Word of the Lord stands forever (Isa. 40:8). As followers of Christ and ambassadors of his kingdom, how are we to bear witness to these unchanging truths in a cultural milieu marked by a pluralism that is often post-Christian and increasingly anti-Christian?

In Uncommon Ground: Living Faithfully in a World of Difference, editors John Inazu (professor of law and religion at Washington University in St. Louis) and Timothy Keller (TGC vice president) offer a pathway through contemporary pluralism. Their contributors represent what might accurately be called “mere evangelicalism.” Each contributor weighs in via narrative, using his or her unique story to highlight an entry point for faithful evangelical engagement with pluralism. Despite their various differences, the contributors draw on the priorities that Inazu put forward in his earlier book Confident Pluralism. 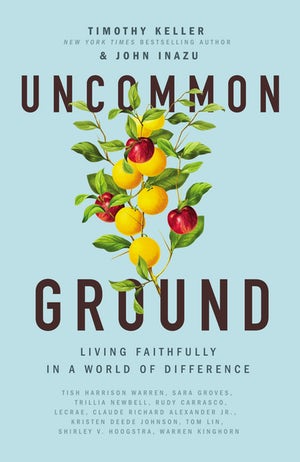 Uncommon Ground: Living Faithfully in a World of Difference

Uncommon Ground: Living Faithfully in a World of Difference

How can Christians today interact with those around them in a way that shows respect to those whose beliefs are radically different but that also remains faithful to the gospel? Timothy Keller and John Inazu bring together illuminating stories–their own and from others–to answer this vital question. Uncommon Ground gathers an array of perspectives from people thinking deeply and working daily to live with humility, patience, and tolerance in our time.

The Christian calling is to be shaped and reshaped into people whose every thought and action is characterized by faith, hope, and love—and who then speak and act in the world with humility, patience, and tolerance (xiv).

The Christian calling is to be shaped and reshaped into people whose every thought and action is characterized by faith, hope, and love—and who then speak and act in the world with humility, patience, and tolerance.

This sounds like a vision of evangelical public witness rooted in spiritual maturity. Yet there are some matters that need clarifying, or at least expanding.

The contributors speak from a particular vantage point of their vocation or experiences. Some are clergy, others are artists. Some are organizational leaders, others are scholars. Some have wide experience in “secular” vocations, others have been involved in “vocational ministry” for most of their adult lives. Their experiences are diverse, and that diversity is one aspect of the book that most stands out.

In addition to vocational diversity, the contributors are marked by ethnic diversity. The “white evangelicals” we hear so much about are represented by contributors such as Keller, theologian Kristen Deede Johnson, writer/priest Tish Warren Harrison, artist Sara Groves, educator Shirley Hoogstra, and professor/psychiatrist Warren Kinghorn. But half of the contributors are non-white, including Asian Americans (Inazu and parachurch leader Tom Lin), African Americans (artist Lecrae, writer Trillia Newbell, and pastor Claude Alexander), and Hispanic American (entrepreneur Rudy Carrasco). In bringing together these contributors, the editors understand what pollsters so often miss: evangelicalism comes in many different colors.

In bringing together these contributors, the editors understand what pollsters so often miss: evangelicalism comes in many different colors.

While this emphasis on diversity is helpful in challenging simplistic depictions of evangelicalism, it’s difficult to discern much by way of theological conviction within many of the chapters. While not all evangelicals are equally confessional (and some are anti-confessional), even so basic a doctrinal consensus as the so-called Bebbington Quadrilateral of biblicism, conversionism, crucicentrism, and activism is more implicit than explicit. This is perhaps simply a function of the more narrative structure of the book. But in the hands of some evangelical readers who are already suspicious of doctrinal particularity, the book could be seen as reinforcing the idea that doctrine divides more than it clarifies.

If any one topic dominates the book, it’s the importance of evangelicals reckoning with their history of injustice as we engage our culture with the gospel message. Racial injustice looms large, and this is a much-needed (if not always appreciated) message.

In the hands of some evangelical readers who are already suspicious of doctrinal particularity, the book could be seen as reinforcing the idea that doctrine divides more than it clarifies.

For much of evangelical history, the movement was predominantly white, which has contributed to the incorrect contemporary perception that it remains a white phenomenon. And for much of evangelical history, white evangelicals have been captive to (at worst) white supremacy and (at best) white privilege. To deny this would be dishonest, as well as effectively undermining one of the core implications of the gospel: reconciliation in Christ among those from different ethnicities (Gal. 3:28; Eph. 2:11–22).

Other injustices are treated as well, including poor treatment of immigrants, sexism, and the abuse of the poor. As with racism, these are issues where some evangelicals have been complicit (either implicitly or explicitly), while others have led the way in offering Christ-centered responses to injustice. Though not all evangelicals will agree on public solutions to these injustices, evangelicals should be committed to challenging them from the standpoint of biblical fidelity and gospel faithfulness. Unfortunately, those injustices where evangelicals have been at the forefront of public engagement—particularly abortion-on-demand, physician-assisted suicide, and human sex trafficking—are rarely, if ever, mentioned in the book.

While this emphasis on pursuing justice is helpful, the book says surprisingly little about evangelism and missions. To be clear, several contributors share their conversion stories, which includes recounting how they heard the gospel and responded. But rarely do the contributors talk explicitly about the importance of verbally sharing the good news with the spiritually lost. Evangelical activism has always championed both evangelism and social engagement, and if anything, the former was often perceived as more important than the latter. Uncommon Ground spends far more time on social engagement than gospel proclamation.

While the less-overt emphasis on evangelism might also be a function of the narrative structure of the book, the contributors are willing to take on a didactic tone when discussing the pursuit of justice. I wish they would’ve done the same with the imperative to verbally proclaim the gospel to unbelievers. A more balanced evangelical perspective can be found in the writings of a previous generation of evangelicals such as Carl Henry and John Stott, as well as the Lausanne Covenant and Cape Town Commitment.

In their conclusion, Inazu and Keller draw on James Davison Hunter’s paradigm of “faithful presence” to suggest four practices evangelicals should adopt in engaging a pluralistic culture (200–05):

These commendable practices should be taken to heart and implemented. However, they should never be embraced at the expense of clear convictions about doctrinal matters and a firm commitment to evangelism. I suspect the editors and contributors would respond with an “Amen!” But because they aren’t as explicit about this point, Uncommon Ground will be most useful to evangelicals who are already committed to sound doctrine and personal evangelism, who are considering the best postures from which to engage the culture.