John Piper is no novice when it comes to racial reconciliation. For decades he has lived in a neighborhood of Minneapolis touted as the most ethnically diverse in the United States. Since the late 1980s he has set aside the Sunday before we observe Martin Luther King Jr.’s birthday to preach on racial diversity and harmony. His Bethlehem Baptist Church has deliberately sought to hire racial minorities as pastors. And when he was 50, Piper and his wife adopted an African American baby girl.

Yet Piper does not regard himself as a model pastor for urban, multiethnic churches. He has chosen to invest his time in preaching and writing, rather than building relationships with his neighbors. So you won’t find a lot of purely practical counsel in his new book, Bloodlines: Race, Cross, and the Christian. But even the best how-to advice on racial reconciliation won’t do you any good if racism still lurks in your heart, shielded from the liberating effects of the gospel. Growing up during the death throes of segregation in Greenville, South Carolina, Piper was a racist. You might be, too, so follow Piper’s lead in Bloodlines as he applies the gospel of Jesus Christ to one our most intractable social problems.

Nothing but the Blood

Tim Keller writes in his foreword that conservative evangelicals “seem to have become more indifferent to the sin of racism during my lifetime” (11). That would indeed be a major problem, since conservative evangelicals have been responsible for so much of the institutional racism of the last 60 or so years. Piper saw racism in the form of Southern segregation. The church of his youth voted in 1962 to ban blacks from attending services. His mother, however, opposed this motion. Piper’s experience explains the burden for writing this book, in which he argues, “Only Jesus can bring the bloodlines of race into the single bloodline of the cross and give us peace” (14). No political platform, lecture series, listening session, or economic program can cure what ails us. Nothing but the blood of Jesus can wash away our sin and make our diverse society whole again. Sadly, white Christians have so often perpetuated racism that we’ve largely lost the moral authority to help our neighbors confront and overcome this sin.

Bloodlines opens with a brief recap of racial history in the United States focused on the leadership of Martin Luther King Jr. and his masterful writing, particularly “Letter from Birmingham Jail.” This historical jaunt may indicate Piper anticipates a youthful readership who did not live through these events. Or maybe he believes the race problem is worse than ever. He writes, “There are probably more vicious white supremacists in America today than there were in 1968” (27).

Either way, no one can argue the church has made sufficient progress on race. Sunday mornings remain largely self-segregated. But Piper sells himself short as a credible leader when it comes to racial reconciliation. He and his church have made commendable and costly investments to live out what they profess about the gospel that unites Jews and Gentiles. I would have gladly read much more than a few appendix pages on Bethlehem’s experience of trial and error. We need theology that exalts the work of Jesus, and we also need examples from churches that have enjoyed God’s gracious favor in the form of racial diversity and harmony.

Ransomed from Every Nation

When the preliminaries give way to biblical exegesis, Bloodlines hums with the unharnessed energy of Piper’s gifting as a pastor/writer. Don’t get me wrong: he is widely read on the sociological and political debates over racial inequality. I learned from his survey of Bill Cosby, Shelby Steele, and Juan Williams. But Piper’s passion is most evident when he’s drawing his points explicitly from the biblical text. He offers many examples of how Jesus brought an end to ethnocentrism. As you might expect, Piper mines the depths of Ephesians, Galatians, Romans, and other Pauline epistles to uncover how reconciliation with God leads to reconciliation with one another, including other ethnicities. Our racism is no worse than the ethnic hatred between Jews and Greeks. And we share their same hope for deliverance from sin. “But now in Christ Jesus you who once were far off have been brought near by the blood of Christ,” Paul tells us in Ephesians 2:13.

Only Piper could make such a compelling case for how the five points of Calvinism offer a remedy for racism. Even “limited atonement” (or as he prefers, “particular redemption”) encourages us to pursue racial harmony by teaching the glorious truth of Revelation 5:9. “Worthy are you to take the scroll and to open its seals,” sing the four living creatures and twenty-four elders, “for you were slain, and by your blood you ransomed people for God from every tribe and language and people and nation.” Piper marshals this and many other texts to show us that racial reconciliation is not an option. It’s the future we’ll enjoy in heaven and the privilege of worshiping the King today. 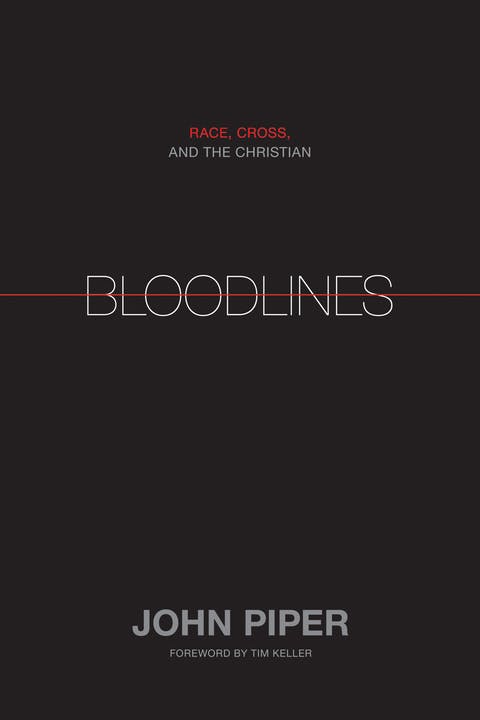 Genocide. Terrorism. Hate crimes. In a world where racism is far from dead, is unity amidst diversities even remotely possible?

Sharing from his own experiences growing up in the segregated South, pastor John Piper thoughtfully exposes the unremitting problem of racism. Instead of turning finally to organizations, education, famous personalities, or government programs to address racial strife, Piper reveals the definitive source of hope―teaching how the good news about Jesus Christ actively undermines the sins that feed racial strife, and leads to a many-colored and many-cultured kingdom of God.

“Blood-bought ethnic and racial diversity and harmony is for the glory of God through Christ,” Piper writes. “It is all aiming at the all-satisfying, everlasting, God-centered, Christ-exalting experience of many-colored, many-cultured worship, an aroma that delights the heart of God” (142).

If we claim we do not sin as racists, then we probably don’t have a good read on the spiritual pulse of our hearts. This is the diverse, conflicted world we live in and the legacy of injustice we have inherited in the West. Piper has written in such a way that many can learn from his experience and especially his exegesis. This is not one of his more theologically complex works, though the issues might actually be more complicated than imputation, the new birth, or Christian hedonism. They are certainly more explosive in our society today. Indeed, the stakes are high. Piper argues:

The achievement of the cross is reconciling all ethnic groups through faith in Christ is part of how the work of Christ on the cross magnifies the greatness of God’s grace. Therefore, what is at stake in our pursuit of racial and ethnic diversity and harmony (both locally and globally) is both our reverence for the cross and our love for the glory of God.

So if you care about the cross and the glory of God, you will pursue racial and ethnic diversity and harmony. Do you truly believe the bloodline of Christ runs deeper than the bloodline of race?