Historians in America have made enormous strides in recovering and integrating the African American experience into dominant American historical narratives. We know more than ever about African Americans’ roles in the American Revolution, the Civil War and emancipation, the World Wars, and more. Moreover, the history of black Christianity in America is far more developed than a century ago, when Carter Woodson’s pioneering The History of the Negro Church in America mapped out a historical field that was almost entirely neglected.

Yet there are still major opportunities waiting in African American religious history for scholars with eyes to see them. Daniel Bare is one such scholar, and his groundbreaking Black Fundamentalists: Conservative Christianity and Racial Identity in the Segregation Era will be an indispensable resource not only for those who study the black church, but for students and scholars of the evangelical movement generally. (For a time in the 1910s and 1920s, evangelicalism in America became nearly synonymous with “fundamentalism.”)

The history of American fundamentalism was turbocharged by the publication of George Marsden’s landmark Fundamentalism and American Culture (1980), a book that presciently coincided with the rise of the Moral Majority, and the white evangelical fusion with the Republican Party. Marsden’s book inspired outstanding studies of the fundamentalist-modernist controversy of the 1910s–20s, works on the anti-evolution crusade, and biographies of fundamentalist leaders, from the urbane J. Gresham Machen to rabble-rousers such as Texas’s J. Frank Norris. 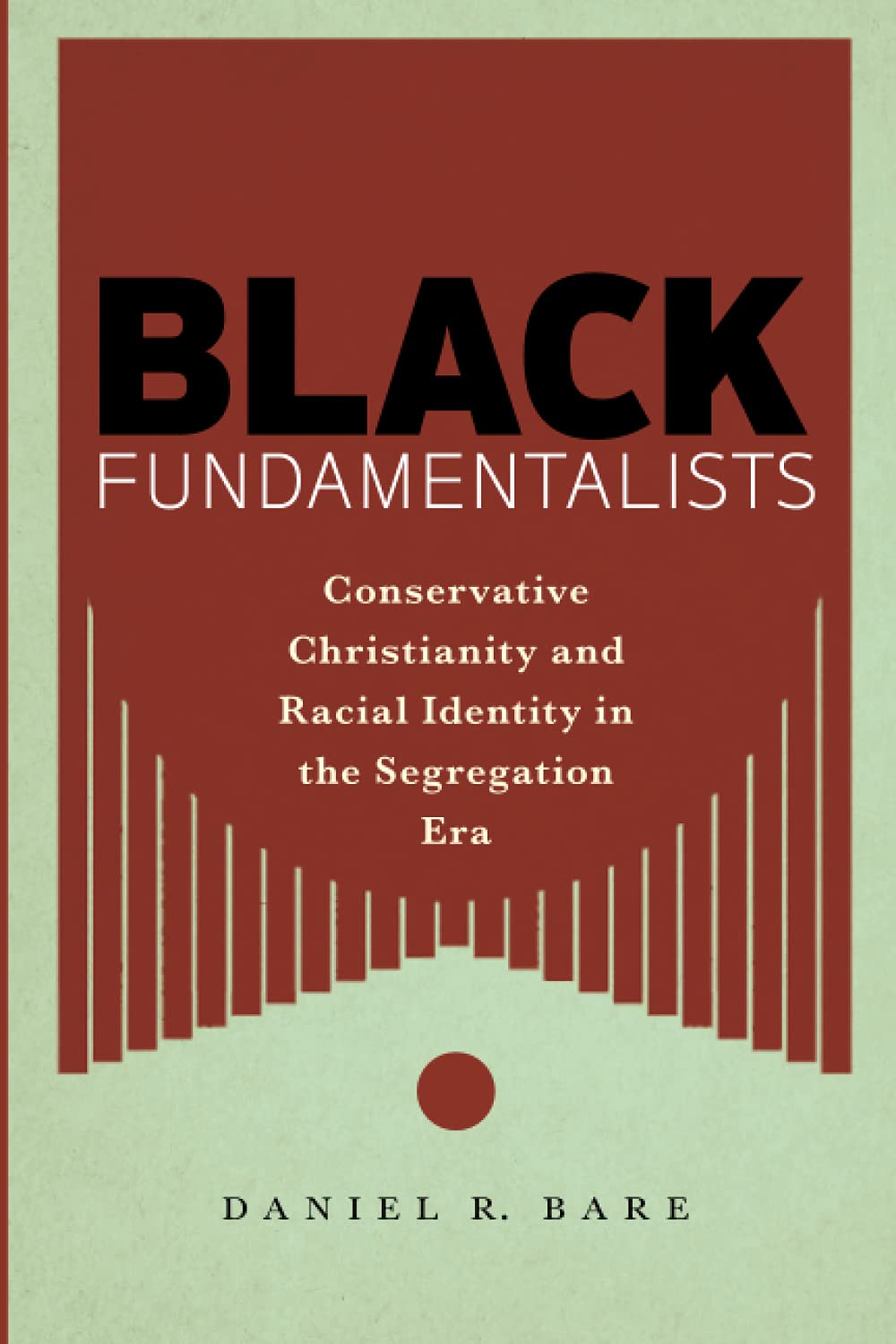 As the modernist-fundamentalist controversy came to a head in the early 20th century, an image of the “fighting fundamentalist” was imprinted on the American cultural consciousness. To this day, the word “fundamentalist” often conjures the image of a fire-breathing preacher—strident, unyielding in conviction, and almost always white. But did this major religious perspective really stop cold in its tracks at the color line?

Black Fundamentalists challenges the idea that fundamentalism was an exclusively white phenomenon. The volume uncovers voices from the black community that embraced the doctrinal tenets of the movement and, in many cases, explicitly self-identified as fundamentalists. Fundamentalists of the early 20th century felt the pressing need to defend the “fundamental” doctrines of their conservative Christian faith—doctrines like biblical inerrancy, the divinity of Christ, and the virgin birth—against what they saw as the predations of modernists who represented a threat to true Christianity. Such concerns, attitudes, and arguments emerged among black Christians as well as white, even as the oppressive hand of Jim Crow excluded African Americans from the most prominent white-controlled fundamentalist institutions and social crusades, rendering them largely invisible to scholars examining such movements.

Black fundamentalists aligned closely with their white counterparts on the theological particulars of “the fundamentals.” Yet they often applied their conservative theology in more progressive, racially contextualized ways. While white fundamentalists were focused on battling the teaching of evolution, Black fundamentalists were tying their conservative faith to advocacy for reforms in public education, voting rights, and the overturning of legal bans on intermarriage. Beyond the narrow confines of the fundamentalist movement, Daniel R. Bare shows how these historical dynamics illuminate larger themes, still applicable today, about how racial context influences religious expression.

Could Black Christians Be Fundamentalists?

In the four decades since Marsden’s book, the study of American fundamentalism (and of modernism as well) has largely focused on white leaders. Even exceptional studies such as Mary Beth Swetnam Mathews’s Doctrine and Race: African American Evangelicals and Fundamentalism Between the Wars (2017) [see my TGC interview with Mathews] tend to assume that black Christians were not, or could not have been, fundamentalists, because white fundamentalists would not include them in organizing or advocacy. The racially exclusive tendency among many white fundamentalists grew out of sensibilities common to the Jim Crow era. Virtually all “fundamentalist” organizations were white-led, if not exclusively white, and historians have naturally gravitated toward institutional histories of fundamentalism. It has been perfectly plausible to conclude, as Mathews did, that many African American Christians “created their own traditionalist conservative evangelicalism,” one that was neither fundamentalist nor modernist.

Virtually all ‘fundamentalist’ organizations were white-led, if not exclusively white, and historians have naturally gravitated toward institutional histories of fundamentalism.

It is perplexing, then, to discover (as Bare did) claims like the following statement in the Norfolk Journal and Guide (a historically black newspaper) in 1925: “Afro-Americans are fundamentalists, for the most part.” It turns out that many African Americans in denominations such as the Missionary Baptist Church and the African Methodist Episcopal Church called themselves fundamentalists. Moreover, African American observers—both friends of fundamentalism and its critics—routinely made statements like the Norfolk Journal’s, assuming that large numbers of black Christians in the early 20th century were fundamentalists.

What’s the disconnect between histories of fundamentalism, which have generally construed the movement as “lily-white” (in one historian’s term), and the explicit self-identification of many African Americans with fundamentalism? Bare explains the incongruity by reference to the tension between sincerely held theological beliefs and those beliefs’ social applications and institutional contexts. He approaches theology with refreshing seriousness, suggesting that African American fundamentalists simply believed in the high authority of Scripture, and in doctrines such as the virgin birth, the physical resurrection, and the literal return of Christ to earth in the last days. They also worried about the surging dominance of evolutionary theory and its implications for the doctrine of creation (and for racial equality).

But African Americans’ social views and denominational contexts were quite different, in many cases, from those of their white counterparts. Black leaders were, of course, deeply concerned about the epidemic waves of lynchings and extra-judicial murders of African American men that scarred the nation during the early 20th century, whereas many white fundamentalists and modernists ignored the issue. (In the worst instances, they even commended lynchings.) And African American fundamentalists generally did not insist on strict separation from modernists, but remained within African American–led denominations, which included modernists. Most black traditionalists were not visibly fundamentalist in an organizational sense, then, and they had a somewhat different social agenda than did white fundamentalists. But they still embraced the doctrines expressed and defended in salient publications such as The Fundamentals (1910–15).

To recover largely forgotten black fundamentalists, Bare engaged in deep archival research in the papers of figures such as the Methodist minister Isaac Reed Berry, who pastored churches in Virginia and Maryland. Berry regularly cited better-known fundamentalist leaders such as A. C. Dixon, and used The Fundamentals (or at least similar writings) as a resource in sermons. Berry was especially animated in his attacks on higher biblical criticism, and on popular modernist notions such as annihilationism (which opposed the traditional belief in conscious eternal torment in hell for unrepentant sinners). “I would rather be a little bit out of date,” Berry proclaimed, “than be out of harmony, even a little bit, with the abiding eternal Word of God.”

But Berry was far quicker than white fundamentalists to identify racism and bigotry as among America’s most besetting sins. In the spirit of Christian brotherhood, however, he hoped that in the future “one race will cease lauding it over and domineering any other race and the race antagonism will melt away.” He regularly struck themes associated with the Harlem Renaissance and “new Negro” movement of the era, including the importance of black education and military service. He reminded congregants of the noble memory of the Haitian Revolution in the 1790s, in which the black general Toussaint Louverture led the most successful slave uprising in world history. Suffice it to say that Haiti was not mentioned in most white fundamentalist sermons.

Bare gives many examples of leaders and pastors such as Berry, who found profound resources in biblicist theology for spiritual assurance, criticism of racial inequality, and hope for a better tomorrow. Perhaps Bare’s greatest contribution is to emphasize the utter seriousness of black fundamentalists’ doctrinal commitments. They found in the perfectly inspired Word of God eternal verities and the only way of salvation, truths that transcended their travails in this broken and sinful world.