This entry into the ever-expanding literature on the Bible’s teaching on same-sex relationships is a welcome yet unsatisfying attempt to “discern the deeper and more comprehensive moral logic that undergirds the specific commands, prohibitions, and examples of the biblical text” that have to do with gender and sexuality (p9).

Brownson’s argument in Bible, Gender, Sexuality: Reframing the Church’s Debate on Same-Sex Relationships is thorough and will reward both skeptics and fans alike, as he routinely digs up what for “traditionalists” in this debate have been assumptions and calls them into question. If his argument proves wrong—as I think it ultimately does—saying where and how it goes astray is more difficult than it seems on the surface, as Brownson challenges a way of reading Scripture that for traditionalists has sometimes functioned as a trump card in this debate.

Brownson (thankfully!) starts in a place other than the deeply contested prohibitions of same-sex sexual activity. His first chapter takes on what is for many theologians the central plank of the traditionalist case on same-sex relations: the “one flesh union” that Gen 2:24 speaks of. Brownson contends that it “does not refer to physical gender complementarity, but to the common bond of shared kinship” (35).

After clarifying how his own canonically rooted approach sits in relationship to other attempts to find more positive theological resources for same-sex sexual relationships, Brownson then turns toward evaluating four “very broad forms of moral logic” that are “critical for understanding what the Bible has to say about sexuality in general: patriarchy, the ‘one-flesh’ bond of marriage, procreation, and celibacy” (14). Throughout these sections, Brownson offers readings of the relevant passages that are meant to problematize the traditionalist positions. On procreation, for instance, he suggests, “the witness of Scripture as a whole suggests that [procreation] cannot be a defining, or essential, aspect of [one-flesh] unions. What is ‘normal’ cannot simply be assumed to be ‘normative’” (122). In returning to the “one-flesh unions,” Brownson sounds a similar note: “The fact that the Bible uses the language of ‘one flesh’ to refer to male-female unions normally does not inherently, and of itself, indicate that it views such linkages normatively” (105). 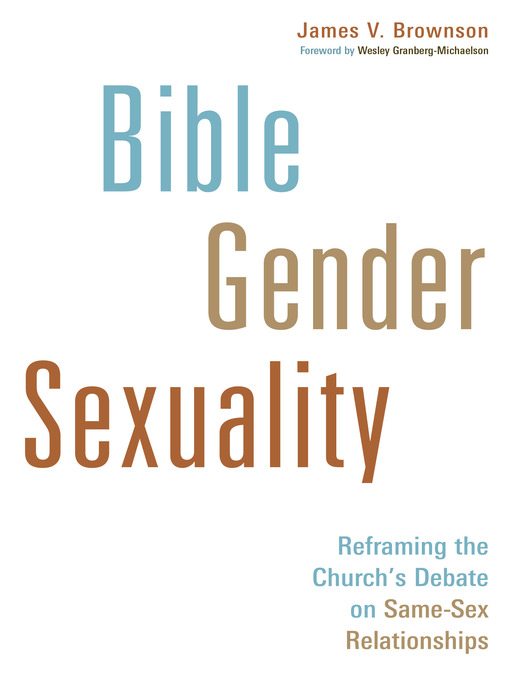 In the final section, Brownson turns toward the boundaries of appropriate human sexuality, taking cues from Rom 1:24–27 to focus on lust, purity, honor/shame, and natural law (chs. 8–11). Here, Brownson’s method of rereading Scripture in light of what he takes to be contemporary givens about the nature of human sexuality comes to the fore. He suggests, for instance, that “the attempt by some traditionalists to bracket sexual orientation and to focus only on sexual behavior” as a way of sorting out Romans 1 is “ultimately untenable, even if it may seem necessary or benevolent from a pastoral point of view” (175). And critiquing the language of “sexual orientation” isn’t an option from his standpoint, either, as the “resistance of sexual orientation to change” is an “increasingly established scientific fact” (176). When Brownson turns to “nature,” he pulls a page from many traditionalist’s playbook and affirms that “redemption does not displace or escape nature; rather, it fulfills nature” (p. 250). But our understanding “of exactly how the will of God is revealed in the natural order is subject to change, deepening, and growth over time” (247). Committed gay and lesbian unions can find a place in this “renewed ‘nature’” provided that nature “is not simply determined by anatomy” and because our understanding of “nature” is different enough from that of the NT that “the New Testament does not envision the kind of committed, mutual, lifelong, loving, moderated gay and lesbian unions that are emerging today” (251).

In his conclusion, Brownson sums up his position and revisits the controversial prohibitions, repeating arguments about their irrelevance for today’s debates that are by now well known. But he also reminds us that “gender complementarity” is “not taught in Scripture, considered in its entirety, and has never been part of normative Christian teaching” (266).

By calling into question whether the “gender complementarity” that is on the surface of the Genesis account is actually a norm that Scripture presents, Brownson indeed moves the discussion closer toward the center of the divide on this question. Yet traditionalists might simply respond that Scripture holds together what Brownson’s distinction tears asunder, namely the covenantal aspects of marriage and the anatomy in which such covenantal commitments are revealed, consummated, and made fruitful in the limited permanence of the gift of children. Brownson suggests that the focus of Genesis 2 is not on the complementarity of male and female, but on their similarity (pp. 29ff.). Fair enough. But focusing on such a similarity is only intelligible within a context where differences are assumed, obvious, and have no need to be argued for, else why bother mentioning the similarity at all? And while Brownson’s suggestion that Gen 2:24 is focused on “the formation of the essential and foundational building blocks of human community—the ties of kinship” (34) is an evocative one, one wonders whether the biological ties beneath that kinship are left with any moral force at all. They did not matter much for society in Plato’s thought experiment in The Republic. Brownson’s emphasis on “kinship” has a similar sort of avoidance of the biological preconditions that make “mutual care” intelligible and valuable.

But these are merely initial worries, and Brownson’s book merits a closer and more full treatment than I can afford here. Indeed, his approach is useful precisely for illuminating the difficulty of defending a stance that the church has nearly unambiguously treated as the presupposition for moral reflection about human sexuality, even if there have been differences over the details of that stance. For traditionalists, the debate over whether the presupposition of anatomical difference is only “normal” or also “normative” will not be settled by appeal to empirical claims about contemporary experience or science. The grammar and meaning of human sexuality is different from other investigations into the natural world, for its subject matter extends beyond that which such empirical pursuits can deliver (namely, the meaning of human sexuality and moral norms).

I suspect Brownson’s book will persuade few who do not share his starting points or his means of integrating “experience” into his reading of Scripture. But for the questions it raises and for the deep challenge it presents to the traditionalist account of Scripture, it is a book worth considering carefully and closely.