America is not just a country; it’s a religion. The faithful sing her praises at baseball games, pay homage to her heroes in Washington, D.C., and recite her pledge of loyalty in schools. They remember the tale of her exodus from England, and fancy themselves as a chosen people. They chide themselves for the original sin of slavery, and praise redeemers like Abraham Lincoln and Martin Luther King Jr. who shed their blood in atonement for the sins of a nation. They spread the gospel of freedom, equality, and democracy, and when doubts arise, they return to America’s most hallowed center to define themselves: their holy scriptures.

Stephen Prothero, professor of religion at Boston University, has done us the favor of compiling these “holy scriptures” of American public life in his latest book, The American Bible: How Our Words Unite, Divide, and Define a Nation. This book is not a translation of the Bible, nor is it even about American religion per se. It is an anthology of classic American texts—legal documents, songs, books, speeches, and letters—that form what Prothero calls “The American Bible.” From the Constitution and “The Star-Spangled Banner” to Atlas Shrugged and The Adventures of Huckleberry Finn, Prothero aims to assemble America’s “canonical works” in order to bring civil conversation back into a Washington characterized by caustic partisan bickering. But as one of America’s leading religion scholars, Prothero has given us much deeper insights than mere political wisdom. In unveiling America’s sacred texts, Prothero sheds light on an uncomfortable truth: America has indeed become a religion.

A thick volume, as if designed to resemble a family King James Bible, The American Bible gathers the near mythic voices of American history. Thomas Paine’s Common Sense incites a revolution, George Washington’s Farewell Address warns of divisive party politics, and Abraham Lincoln’s Gettysburg Address defines America as a nation “dedicated to the proposition that all men are created equal.” Dissenting voices like Henry David Thoreau’s “Civil Disobedience,” Chief Joseph’s declaration “I will fight no more forever,” and Malcom X’s The Autobiography of Malcom X all find a place in America’s holy writ. From Irving Berlin’s “God Bless America” to Thomas Jefferson’s “wall of separation between church and state,” The American Bible is a one-volume cornucopia of America’s most hallowed and fiercely debated texts.

Following the pattern of an “American canon,” the book’s table of contents employs themes from the real Bible to organize its ideas. “Genesis” includes texts on America’s founding period, “Chronicles” includes excerpts from classic American novels (Uncle Tom’s Cabin triumphs as most influential), and “Gospels” includes classic speeches from Jefferson, Franklin Delano Roosevelt, and Ronald Reagan. Prothero gives each entry in The American Bible a three-part structure: an introduction written by himself, the primary source text, and an extended commentary of disagreeing voices through the decades, forming a kind of “American Talmud” that embraces spirited disputation in much the same way Jewish rabbis debate the Torah.

For Prothero, the heart of America is not a common creed, but a common conversation. He writes, “The United States is not held together by a common creed. . . . What brings us together is practice—the practice of listening to and arguing about voices from our shared past.” The key to fixing our “obviously dysfunctional” Congress and our common life that has “devolved into a shouting match” lies not so much in finding agreement as in learning how to argue with civility for America, not just for your own party. A return to the sources of American life—figures Jefferson, Lincoln, and King—provides the foundation of American identity, even without coming to an agreement on their meaning. For Prothero, to criticize your country is not to opt out of the American experiment, but to opt in. And in this debate he hopes to unify a creedless people around the Great Conversation of what it means to be an American.

The Good, the Bad, and the Haunting

It’s not difficult to find things to praise about The American Bible. It is a treasure trove for understanding American culture. Far too many Christians try to understand culture by analyzing the latest social media trend or MTV top ten list, forgetting all the while the truly distinct features of American life. If an alien landed in modern America and wanted to know its essential features, Facebook may not help much, but The American Bible would. Benjamin Franklin and Patrick Henry shape the American ethos more than Lady Gaga or Mark Zuckerberg ever will. 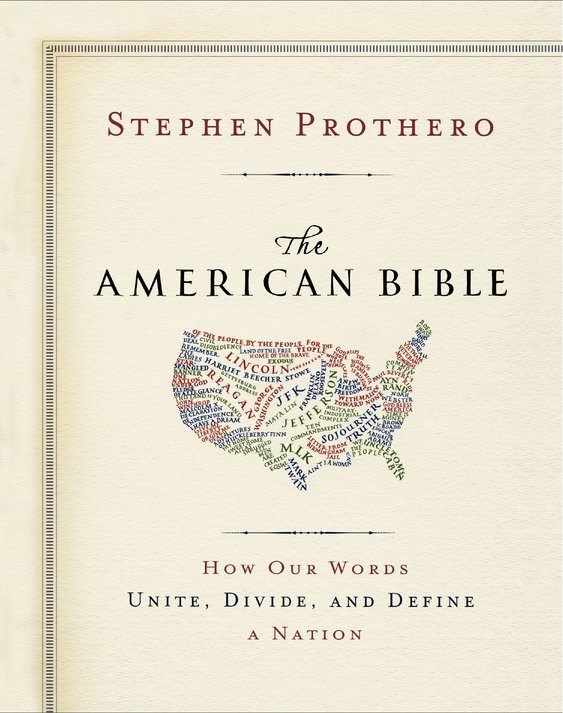 The American Bible: How Our Words Unite, Divide, and Define a Nation

The American Bible: How Our Words Unite, Divide, and Define a Nation

The New York Times bestselling author of Religious Literacy and God Is Not One presents a provocative crash course in the great “American scriptures”—those texts that have both divided and defined our understanding of what it is to be American. Stephen Prothero gives readers an exciting and user-friendly introduction to American cultural history in The American Bible.

Moreover, Prothero’s book offers a clear, even-handed treatment of enduring political debates. His assembled “rabbinic” commentary draws from both the right and the left, giving credence to his aim of bringing civility back to fiery contemporary debates. Written in crisp and concise prose, Prothero also has a knack for selecting only the best sources and making complex issues understandable for the average reader.

However, Prothero’s main thesis that America isn’t defined by creed but by common debate doesn’t hold up under scrutiny. He declares:

It is not un-American to criticize any book in the American Bible. Look Lincoln in the eye and tell him you don’t give a hoot about equality. . . . More power to you. . . . No idea is dogma. But as you criticize Lincoln or King or Bush or Obama, know what you are doing. You are not opting out of America; you are opting in. . . . [Americans] come together to argue. This is our shared practice (489).

For Prothero, the only bond of unity for Americans is the argument itself. But if there is no American creed—even something as broad as “freedom, justice, and equality,” however they’re defined—then why are we arguing at all? Is there no hope for ever arriving at truth? It’s problematic to write a book with the aim of restoring civility to American politics and yet claim that arguing is our most central feature. To declare that there are no American dogmas or doctrines is to disagree with most authors of The American Bible who, judging by their colorful use of language, certainly believed they had arrived at the truth. Taken to its logical extreme, Prothero’s thesis leaves us not with thundering King, brilliant Jefferson, or determined Washington, but the wet noodles of postmodern uncertainty.

But his thesis isn’t what caused me to shudder; it was his metaphors. For example, Lincoln, Jefferson, and Washington form the “American trinity.” Slavery is the great “original sin,” the Gettysburg Address our American “Sermon on the Mount,” and Noah Webster’s Blue-Back Speller a sort of “federal catechism” for colonial America. Whether portraying Woodie Guthrie’s “This Land Is Your Land” as a national psalm or blatantly tagging classic American texts as national scripture, the reader is forced to honestly ask, “To what degree does America function like a religion?”

Although nationalism is nothing new, the idea of “American civil religion” is relatively recent, introduced during the 1960s by sociologist Robert Bellah. American civil religion is generally thought to be a distinctive faith, complete with myths of origin (the Revolution, the Boston Tea Party), a pantheon of saints and martyrs (the Founding Fathers, the fallen Lincoln), a liturgical calendar (the Fourth of July, Memorial Day), and an all-embracing worldview. Prothero’s American Bible falls squarely in this camp. Though he certainly wouldn’t claim this as his own worldview—he’s far to “objective” for that—he makes the case that the real Bible “stands alongside other texts that Americans have long been held as sacred.” Borrowing Christian language for American ideas is not just metaphor for Prothero; it’s an allusion to the nation-state’s ultimate supremacy in all matters of faith and practice.

It’s debatable how widespread American civil religion really is. The line between admiration of national heroes and hero-worship can be blurry. But at bare minimum, ministers must honestly ask, “When does the flag displace the cross on the altar of American Christianity?”

The American story is a good one. For centuries immigrants have flocked to America for liberty, justice, and opportunity. And it’s worth reading the foundational ideas behind the American experiment, even if it means buying a lengthy (and rather heavy) anthology.

But the mystique of America is no match for the eternal kingdom of God, a heavenly country God’s people have desired for centuries (Heb. 11:16). When America tries to make itself the gospel, the great story to which all other worldviews and religions must bow, pastors have the distinct privilege of reminding us that the United States will eventually pass away, but Christ will reign forever and ever (Isa. 9:6).

Jeff Haanen is the executive director of the Denver Institute for Faith and Work and blogs at www.jeffhaanen.com.