Call it the Hillbilly Elegy effect. Bookstores have bulged with attempts to explain support for President Trump since his surprise election in 2016. Such books ask the same question: What’s wrong with America? But they don’t emerge from the same assumptions or aspirations. One set masks their accusation in a question: Who are these people who voted for Trump? The other set aspires to learn an answer: What are they trying to tell us?

Timothy P. Carney belongs in the latter category with his new book, Alienated America: Why Some Places Thrive While Others Collapse. Carney, commentary editor at the Washington Examiner and visiting fellow at the American Enterprise Institute, insists that he’s written a book about Trump voters, not about Trump. And we’re grateful he did. Carney’s book doesn’t belong in the genre of political polemics whose authors appear on cable news. It’s more like the long series of sociological studies produced by the likes of Robert Putnam, Charles Murray, and Robert Wuthnow. Carney shows how places where you’re more likely to bowl alone resonated with Trump’s rallying cry that he would make America great again. For them, the American dream is dead.

But Carney brings a unique and insightful perspective to this long-standing lament for the loss of social capital in American life. He doesn’t concentrate on the 2016 general election between Hillary Clinton and Donald Trump, because Trump supporters offered innumerable reasons for preferring him to Clinton. So he turns to the Republican primary election results, and he discerns a fascinating trend.

In particular he looks to areas where Trump lagged behind competitors like Marco Rubio, Ted Cruz, and John Kasich. Those locales contrast as much as heavily Dutch, conservative, middle-class Oostburg, Wisconsin, and cosmopolitan, liberal, rich Chevy Chase, Maryland. So what holds them in common? They score especially high on social capital. Their schools don’t lack for volunteers. Clubs of all kinds thrive. Local government engenders trust. In these areas—some highly educated and liberal, others highly religious and conservative—the American dream is alive and well. And Trump’s support in the Republican primary was dead on arrival. 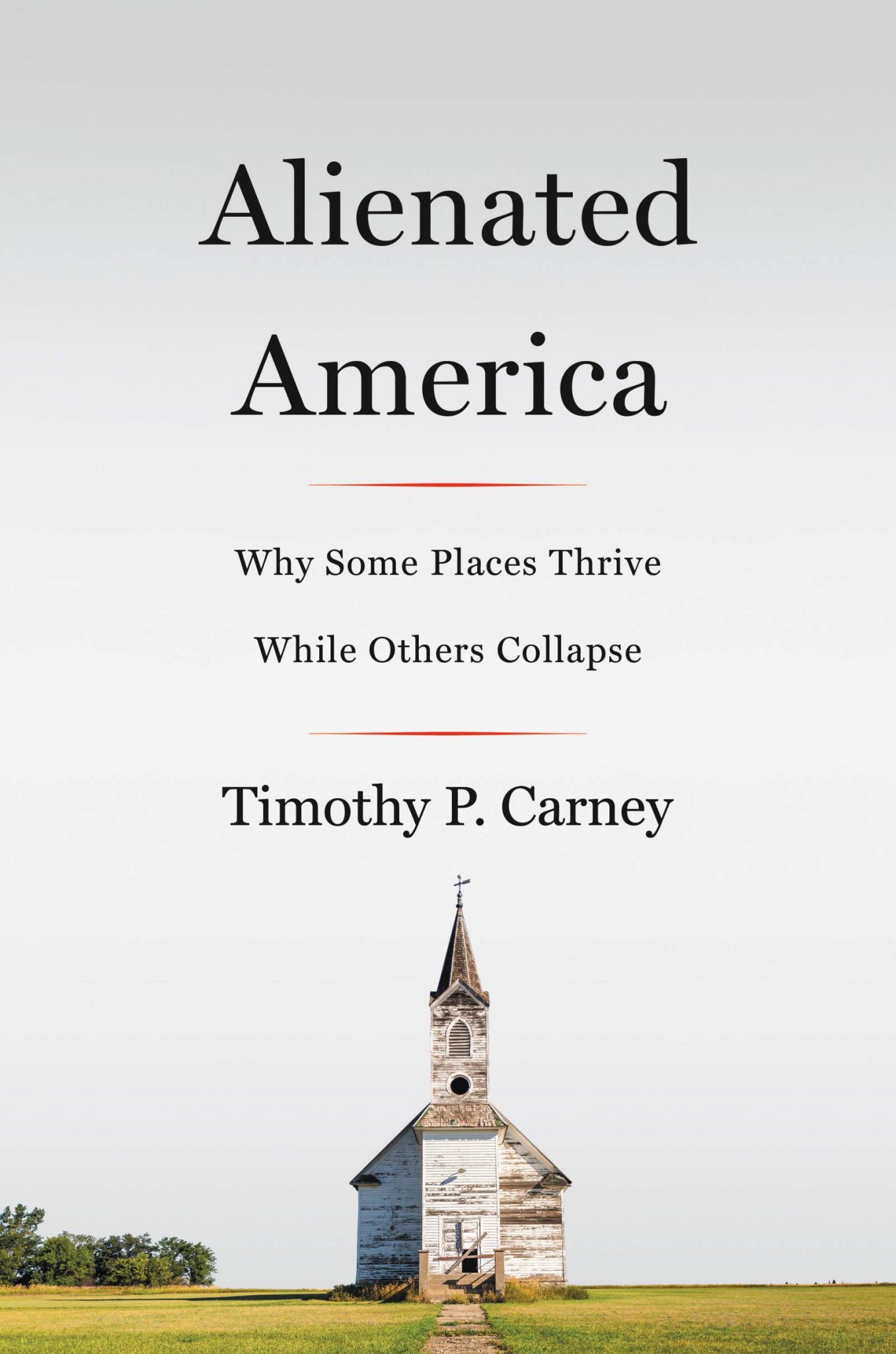 In Alienated America, Carney visits all corners of America, from the dim country bars of Southwestern Pennsylvania, to the bustling Mormon wards of Salt Lake City, and explains the most important data and research to demonstrate how the social connection is the great divide in America. He shows that Trump’s surprising victory in the Republican primary was the most visible symptom of this deep-seated problem.

In addition to his detailed exploration of how a range of societal changes have, in tandem, damaged us, Carney provides a framework that will lead us back out of a lonely, modern wilderness.

So what’s the big point for Carney? He shows readers that if you want economic and social mobility—the American dream—you need social capital. Good schools, churches, and clubs support strong families. And strong families reinforce those institutions as they together promise a better life for our children. Yet in too many American communities—across the political spectrum—these institutions have collapsed. We’ve read a lot about the effect of family dissolution. But Carney introduces a new dynamic: Churches in particular have declined in many places where Trump thrived in the 2016 primary. He concludes that you can find the communities where the American dream is dead by looking for vacant church buildings.

You can find the communities where the American dream is dead by looking for vacant church buildings.

With the widely reported support of Trump by white evangelicals, many readers might be confused by how Carney connects closing churches with supporting Trump. But that’s why his focus on the Republican primary is so valuable. He cites polls that indicate Trump’s biggest supporters—the kind of people who didn’t care much for politics until Trump captivated them—were also the most likely demographic to say religion is “very important” to them. Somehow, at the same time, they were the group least likely to regularly attend church. By contrast, Trump fared worst among Republicans who attend church most frequently. Here’s where Carney connects to Hillbilly Elegy [read TGC’s review of Hillbilly Elegy]. In J. D. Vance’s book, there’s a lot of talk about Jesus. But there isn’t much organized religion or church attendance.

For Carney, a practicing Catholic, the decline of church life has many effects, even through a purely secular lens. Let’s look at the differences between Carney’s two paradigmatic cities where the American dream thrives: Chevy Chase, Maryland, and Oostburg, Wisconsin. Chevy Chase is much wealthier. Oostburg is much more religious. Both rejected Trump in the primary. And both teem with social capital. Carney concludes that you can buy your way into social capital by moving to a place like Chevy Chase. It’s like fictional Eagleton from the NBC comedy Parks and Recreation. You’ll get great schools full of well-adjusted if highly pressured kids. But with a median income of more than $250,000, most of us can’t afford that option even if we want it. Any of us, though, can afford to join a church. Oostburg, then, holds the key to reviving the American dream of economic and social mobility.

One year after the 2016 presidential election, The New Yorker writer Larisa MacFarquar reported from Orange City, Iowa. It’s a town I know well, having grown up among that region’s Dutch diaspora. My high-school marching band usually performed in the Orange City Tulip Festival parade. It’s a town that bears striking resemblance to Oostburg in its religious and ethnic makeup, though Orange City is about three-times larger with 6,000 residents and growing. MacFarquar’s report, “Where the Small-Town American Dream Lives On,” found the same thing Carney did. Strong churches make strong families that make strong schools. You might not expect to find the American dream thriving in a small conservative town isolated from air travel and hospitals, with some of the most extreme weather anywhere on Earth. But that’s just what you see in the diversified economy of Orange City. Social capital begets, well, capital.

Church leaders may not see themselves as stewards of the American dream. Given the scriptural warnings against love of money, we’re at best uneasy in such an acquisitive, materialistic society. The prosperity gospel perverts the actual gospel and damns its adherents. But if you understand the American dream more as economic and social mobility, then you can see the role we play in helping socialize our communities in ways that lift everyone together. We’re not so much trying to help people get rich as trying to expand opportunity and freedom to all our neighbors, whatever their religion, class, or ethnicity.

Many of our neighbors have despaired of hope for themselves and their communities. Even the churches have abandoned them. They think that perhaps a distant political leader can make their dreams come true. Let’s give them a better hope for change. Let’s help them find Jesus in the church, and introduce them to a community—better, a spiritual family—whose bonds will endure for eternity. To fulfill that call, we need more churches led by pastors who love the small places.

The American Dream may be dead in much of the country. But downward mobility doesn’t hinder gospel advance. In the economy of Jesus, it’s the route to rewards (Phil. 2:5–11).

3 Sipping Poison Won’t Make You Wise (Take My Word for It!)

5 Christians Are Not Immune to Conspiracy Theories