After Plato’s allegory of the cave, Nietzsche’s parable of the Madman is probably the most famous in all of Western philosophy; indeed, the Madman’s declaration “God is dead and we have killed him” has probably penetrated its consciousness at a far deeper level. Nietzsche asked an intellectual culture still living off the borrowed values of a Christianity it no longer professed: “How do we live in a world that has lost its central conceptual, moral, existential focus? What do we make of meaning now that we know God doesn’t exist?”

Through two major works, Sources of the Self (1989) and A Secular Age (2007), Canadian philosopher Charles Taylor has argued that in the wake of Nietzsche the onslaught of scientism, rationalism, and secularism has thinned out the moral world we moderns inhabit. As a subtraction story secularism disenchants the world, emptying our sense of transcendence and pushing us into an “immanent frame” of living that’s inevitably hollow and existentially impoverished. Other secular thinkers such as Luc Ferry and Ronald Dworkin have, in their own ways, joined Taylor in this judgment. 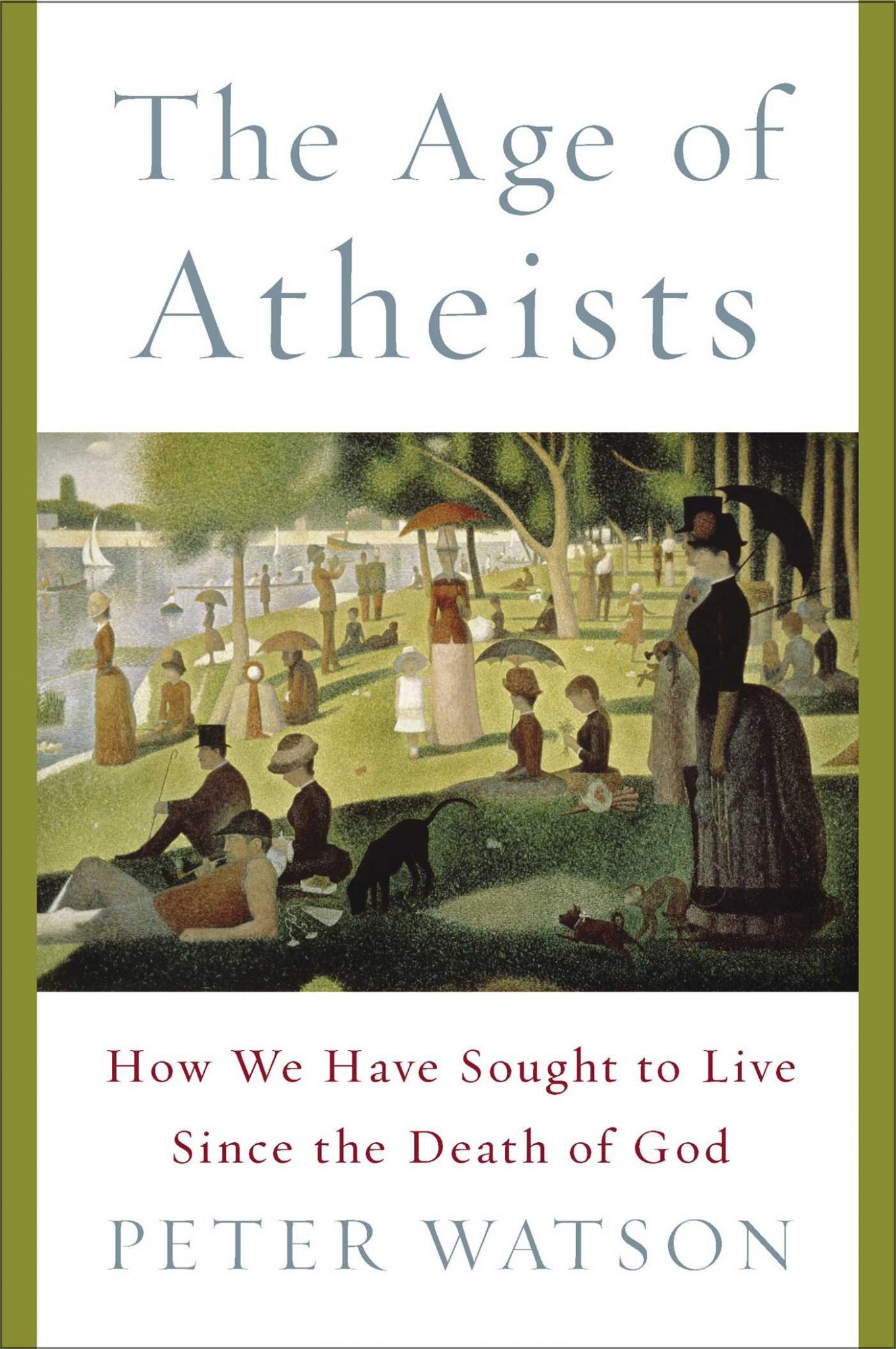 The Age of Atheists: How We Have Sought to Live Since the Death of God

The Age of Atheists: How We Have Sought to Live Since the Death of God

In The Age of Atheists: How We Have Sought to Live Since the Death of God Peter Watson hopes to change the narrative by pushing back on Taylor’s impoverishment thesis. In this massive and thoroughly entrancing work of intellectual and cultural history, the prolific London-based author aims to recount hitherto-untold drama of the multifarious and rather “thick” ways we’ve tried to “live without God” ever since we discovered his death about 120 years ago.

Beginning with Nietzsche himself, Watson focuses on the lives, stories, and theories of those who haven’t merely lamented the loss of God but pushed through to find meaning—or rather “meanings”—of a more humble sort on the other side. Jumping from Europe to America to the Isles, Watson presents us with a cascading torrent of names (the back cover alone is plastered with them)—whether poet, philosopher, novelist, dancer, psychiatrist, or theologian—all of whom offered visions of life beyond traditional religious belief. The overall effect is to overwhelm you with the wealth of non-theistic options to meaning and fulfillment. To put it bluntly, Watson wants to show us we have more options than glum Dawkinsism or Jesus.

As a book of this magnitude defies any suitable summary, I’ll simply offer a couple of practical reasons why Christians, and especially pastors, ought to be interested in this work.

Watson makes the common mistake of assuming a definition of “religion” that clearly distinguishes it from “secular” thought systems, and then proceeds with his analysis as if everyone knows what he’s talking about. As Westerners trained in the typical thought patterns of modernity, I suppose in some sense we do. But this mistake leads Watson to describe only some (usually the grander, more metaphysical) philosophies as “quasi-religious.”

The problem, as William Cavanaugh has demonstrated in The Myth of Religious Violence, is that the dichotomy is a dubious modern construct that either includes “secular” philosophies most Westerners would want to exclude or excludes “religions” they’d want to include. Instead, it’s better to speak of worldviews, metanarratives, narrative identities—some of which explicitly appeal to the divine and some of which don’t, but all of which perform the same function of organizing experience (the true) and giving structure to both our moral intuitions (the good) and view of the good life to be pursued (the beautiful). In that sense, then, they’re all “religious.”

If that’s the case, Watson’s narrative is valuable because it functions as a history of the most prominent intellectual and aesthetic idols and ideologies shaping our culture’s affections and shared understandings. What’s more, it is a sympathetic exposition. Watson is an honest partisan—his approach is far more helpful than the quick, often inaccurate summaries of Christian apologists. I happened to be reading G. K. Chesterton’s Heretics at about the same time I was reading Watson’s descriptions of many of the same period, and I noted the difference. While Chesterton largely had their measure, you often can’t feel the force of his critiques until you’ve sympathetically appreciated the appeal of those he’s critiquing.

Why does this understanding matter? For various reasons, but according to recent Pew research, the religiously unaffiliated (“nones”) now account for roughly 20 percent of the general population—and the rate is even higher among millennials. That said, these aren’t merely Dawkinsian atheists. In his 2010 book Generation Ex-Christian Drew Dyck helpfully complicated the picture by identifying six types of “ex-Christians” whom we need to reach. The Age of Atheists sheds light on an even broader spectrum. Indeed, Watson contends there’s no “one way to live” but rather multiple, particular ways nonbelievers have been living, quite comfortably, without God.

What’s more, Watson identifies numerous underlying threads uniting them all and making their presence felt in the lives of faithful parishioners. To take one example, his discussion of Freud, Maslow, Rogers, the search for self-realization, and the “triumph of the therapeutic” as a replacement for religious transcendence feels particularly relevant. If we’re going to appeal to the cultural narratives people are embracing, we need to know their roots as well as the various moods, tones, and nuances they can take on. If we’re not adept at recognizing more than one or two shades of unbelief, our outreach and preaching will likely only reach one or two shades of unbelievers.

The Age of Atheists is full of “pagan” wisdom, and Christians should not reject wholesale the insights of the secular. By God’s common grace he’s given many good gifts to the poets and thinkers of the 21th century (James 1:17) from which Christians can benefit. As Augustine and the early church fathers said, it’s perfectly fine for Christians to plunder the treasures of the Egyptians in the writings of secular thinkers. Calvin warned against spurning the Spirit’s gifts of truth in secular writers (Institutes II.11.14–15). And in this book, there is plenty to be plundered.

I was blessed by Watson’s constant attention to and brilliant analysis of the nature and role of poetry in human life as a way of stopping, observing, and naming nature—and enriching our lives in the process. All the same, I thought, Ah, but that insight actually fits so much better in the Christian worldview! The attention to detail, to the particular, to the local fits better in the view of a Christian who believes he’s been deployed to name all of the creation that reveals God’s glory.

Incidentally, I couldn’t help but notice, in case after case, the importance of preaching real theology. Several accounts of atheists reacted against Christianity that was an unrecognizable shell of itself; they affirmed life in this world against Platonic, anti-materialist Christianities that hardly deserve the name. The social hope of the Deweyan pragmatist needs to be underwritten by resurrection, not agnosticism.

In the end, Watson’s vision of the good life after God recalls Stephen Toulmin’s description of Renaissance philosophy as “oral, particular, local, and timely” (Cosmopolis). He argues that instead of the grand, overarching, crushing sort of “meaning” that the great monotheisms, or ideologies like Marxism, espouse, we should “live down to the fact” of reality, embracing the smaller meanings we find in poetry, phenomenology, and pragmatic social hope (554). These avenues give us access to enriching observations about the real world we live in; a world with little corners we can name and know intimately; names that expand our shared vocabulary, rendering our societies and experiences more human in the process.

Though Watson makes a good showing, I’m not convinced. As one Ancient Near Eastern philosopher put it, “God has set eternity in the hearts of man” (Eccl. 3:11). We were made to glorify God and enjoy him forever. That grand, universal, timeless, cosmic purpose is the proper setting for all of our smaller, particular, and timely local vocations in the world. For that reason, no matter how much philosophy we read or poetry we write, though our language expands to the vast reaches of the cosmos, our hearts will remain forever restless until they find their proper rest in him.

1 5 Foundations That Lead to Compromise on Sexual Ethics

4 6 Christian Athletes to Watch in the Tokyo Olympics