Friends described that year’s lecturer as the “John MacArthur of the North.” His name was John Piper.

So there I sat in the Hodges Chapel at Beeson, hanging on his every syllable. With each word, my call to ministry intensified. The Minneapolis pastor spoke as one having authority—an authority rooted in God’s Word and accentuating God’s glory.

It was an introductory dose of what all who’ve heard Piper have come to expect—an unveiling of the majesty and supremacy of God. That day I grabbed a copy of his book The Supremacy of God in Preaching (Baker). I quickly devoured, marking up every page. I’ve since re-read it every few years, and now, 25 years since its initial publication, it deserves renewed attention. (Baker recently published a revised and expanded edition to mark the anniversary.) 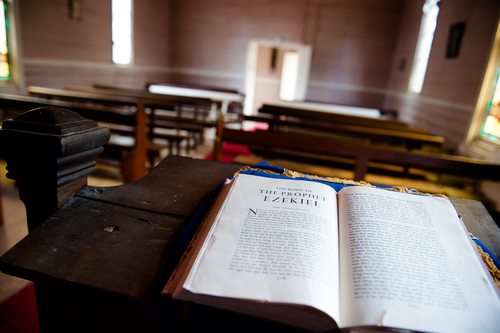 6 Takeaways from an Enduring Volume

How has the volume stood up over a quarter-century? It remains as powerful, convicting, and encouraging as at the outset.

1. To preach is to put one’s deepest beliefs on display.

For better or worse, what comes out in the pulpit each Sunday will, over time, reveal what the preacher truly believes and prizes. At the most foundational level, this begins with his theological presuppositions. Mark it down: the preacher’s presuppositions always shape the sermon. Luther and Spurgeon’s Christ-centered hermeneutic impacted their exegesis and their preaching. Calvin’s God-centered approach did the same.

Piper’s God-centered “Christian hedonism” radiates throughout his preaching. It also drives this book. Piper puts preaching on a higher ground—pointing preachers to engage the true, deep longings of the human heart. As he observes, “People are starving for the greatness of God, but most of them don’t even know it.”

2. The preacher should point his people to the grand truths of God.

In doing this, it is not that the preacher dismisses felt needs; he eclipses them. Piper writes:

My burden is to plead for the supremacy of God in preaching—that the dominant note of preaching be the freedom of God’s sovereign grace, the unifying theme be the zeal that God has shown for his glory, the grand object of preaching be the infinite and inexhaustible being of God, and the pervasive atmosphere of preaching be the holiness of God. . . . Then when preaching takes up the ordinary things of life—family, jobs, leisure, friendships; or the crises of our day—AIDS, divorce, addictions, depression, abuses, poverty, hunger, and, worst of all, unreached peoples of the world, these matters are not only taken up. They are taken all the way up to God.

3. The preacher should be relentlessly and precisely biblical.

After all, the preacher is to be God’s mouthpiece—his human spokesman—and it is high treason to misquote, misrepresent, or under-dignify the King and his Word. When the preacher vaguely references Scripture, Piper warns:

We are simply pulling rank on people when we tell them, and don’t show them from the text. This does not honor the Word of God or the work of the Holy Spirit. I urge you to rely on the Holy Spirit by saturating your preaching with the Word he inspired.

4. Balance gravity and gladness in the pulpit.

Reading The Supremacy of God in Preaching is a refresher on the majesty of God and the gravity of preaching. It is simply impossible for a warmhearted, thinking preacher to finish the book without sensing anew the weightiness of the preaching task. But Piper couples the call to gravity with a plea for gladness, rooted in the character of God:

Gladness and gravity should be woven together in the life and preaching of a pastor in such a way as to sober the careless soul and sweeten the burden of the saints.

5. Preach to stir up holy affections within your people.

Good preaching aims to stir up “holy affections”—such emotions as hatred for sin, delight in God, hope in his promises, and tender compassion. The reason is that the absence of holy affections in Christians is odious.

Outward acts of benevolence and piety which do not flow from the new and God-given affections of the heart, which delight to depend on God and seek his glory, are only legalism and have no value in honoring God.

6. Have ministry mentors, living and dead.

Of course, for Piper it’s Jonathan Edwards above all. For us, it might be Spurgeon or Whitefield, Luther or Carey. Link yourself to them. Know them. Reflect on their lives. Read their sermons. Absorb their perspective. Emulate their character. Draw strength from their sacrifices. Savor their God as your own. Then go be yourself.

Take Up and Read

The Supremacy of God in Preaching has stood the test of time. It’s proven to be a perennial book, useful for all preachers during every season of life and ministry. And it merits reading by a new generation of preachers who seek to honor God’s Word and feed his people.