Jen Pollock Michel’s newest book, Surprised by Paradox: The Promise of And in an Either-Or World, combines a Chestertonian love for paradox, biblical reflection, and wisdom gained through a life spent following Jesus. She points us away from safe simplifications of what we believe and invites us into a broader, more expansive vision of orthodoxy that is full of paradox, mystery, and beauty. 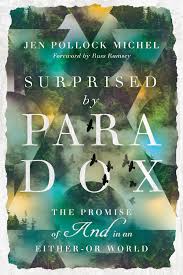 Jen is one of evangelicalism’s most insightful authors, and her talents as a writer shine whenever she connects Christian truth to the Christian life. She has divided this book into four major categories—incarnation, kingdom, grace, and lament—and in each section, she reflects on the awe-inspiring paradoxes of the Christian faith.

Before I offer a friendly critique of something here that is common in evangelical circles, I want to recommend Surprised by Paradox for its beautiful expression of Christian truth. Below are a few appetizers to whet your appetite.

As a fellow Chestertonian, I love the emphasis in Jen’s work on paradox. Rather than seek to resolve every point of tension or undo the “tangles” of the Christian faith, Jen embraces Christianity’s “doctrinal complexity.” And she’s right to do so. The truth is complex not overly simple, just as the world is complex and not overly simple. (The fact that the gospel is both inexhaustible in its depth but also simple enough to be understood and believed by a child is another glorious paradox.)

Reading her treatment of lament, I hoped she would peer into the mystery of God’s impassibility and his suffering in the person of Christ, to show us the beautiful paradox of a God who both suffers and does not, but she didn’t go there, choosing instead to stay with the picture of a suffering King. Still, the fact that additional paradoxes were impressed upon me in reading her work signifies the substance of her writing and how fruitful she is in stimulating thought for further exploration.

In way of critique, I do want to dig a little deeper into an assumption that seems to be growing among younger evangelicals. It’s an assumption that shows up in two different ways. The first is the impression that mystery evokes wonder and awe among us. When we come to the end of our knowledge and are struck by our finitude, the mysteries of faith leave us with a sense of wonder. According to this way of thinking, it’s not what we know that stirs up awe in us so much as knowing what we don’t know.

On the surface, there appears to be Scriptural precedent for this approach to mystery, most notably in Paul’s declaration at the end of Romans 11 where he bursts into praise at the unsearchable judgments and untraceable ways of God, or in Job’s response to the awe-inspiring vision of God’s creative power. But in the end, I don’t think it’s the mystery of what is not known that evokes this reaction, but the revelation of God’s judgments and ways, or the display of his glory in creation. Yes, there is a certain level of mystery that will always remain and should lead us to put our hand over our mouth and acknowledge our finitude. But this reaction generally follows a glorious revelation of God’s mysteries. Jen is at her best when she is exploring the depths of doctrinal paradox—digging into what has been revealed in Scripture. That is what evokes a sense of awe and wonder in me as the reader, not when she is speaking more generally about all the mysteries that remain.

Related to the assumption about mystery as the driver for spiritual wonder and awe is the impression that there is a barrier between certainty and humility. Since mystery is necessary for reminding us of our finitude, intellectual certainty becomes incompatible with a spirit of humility. In other words, the primary way we demonstrate our humility is by confessing the limits to our knowledge and by saying, “I don’t know” or “I don’t understand it all.” Mystery keeps us humble. Certainty keeps us proud.

This is not a dominant theme in Surprised by Paradox, but it shows up here and there, and it’s something that Russ Ramsey in his foreword recognizes also. He distinguishes (helpfully, I think) between “comprehensive certainty” and the kind of certainty or confidence that we should pursue as an aspect of Christian faithfulness. “We know in part,” Russ says, quoting Paul, and this is what I assume Jen is getting at when she says we need to pursue humility, not certainty. She’s emphasizing the in part aspect of our knowledge. But lest we overcorrect, let’s not forget that Paul did also say We know.

Where does this assumption come from? Like many other evangelicals, Jen’s background involves an overly intellectualized version of the Christian faith, where the assumption was that “believers always needed more certainty, not less” (9). Jen recognizes in her upbringing some of the negative effects of modernity, which promoted “certainty in certainty” (11), and like the careful thinker she is, she rightly spots the idolatrous pull of autonomy—the insidious ways that we seek to maintain control of our faith by thinking we’ve answered all the questions and mastered all the details. This is an unfortunate outworking of Enlightenment rationalism:

“The shift of modernity—from an embrace of mystery to a rejection of it—has undoubtedly affected our approach to faith. Though the Bible has not changed, our reading of it has. It’s confidence we now prize in life with God; uncertainty we resist. We don’t accommodate mystery as well as our ancient and medieval forbearers, especially in theology.” (11)

On one level, I say “amen” to all of this and agree that our goal is not to master a tightly clenched Bible full of systematic answers to all of life’s questions. Matthew Lee Anderson is right: “Confidence has many imitators and the most pernicious might be that which always speaks with the right answer.” Jen is right to warn us away from asserting our intellectual certainty in a way that fails to demonstrate a corresponding humility.

But we must also avoid reacting against the excesses of modernity by embracing the problems of postmodernity, which would doubt our ability to know anything for sure. If we were to go back and interview our ancient and medieval forbearers, I do not believe they would say it is wrong to “prize confidence in our life with God” or to “resist uncertainty.” Neither would they assume the pursuit of humility requires us to forgo certainty, as if certainty and humility cannot coexist. They lived with mystery, yes, but there’s no question that Augustine’s Confessions, for example, demonstrates an unquenchable aspiration for knowledge and confidence.

Jen writes of our need for “not certainty, but trust,” and when she’s talking about the certainty of dotting every ideological “i” or crossing every theological “t,” then yes, we must recognize the personal trust that is at the heart of the Christian faith. But lest we forget, the whole of Christian orthodoxy once rested on the inclusion or exclusion of an “i” in the creedal affirmation of the Trinity, and I’m sure Jen would agree that Athanasius was both certain and humble when he refused to compromise.

Furthermore, we cannot fully distinguish “certainty” and “trust” when, according to Hebrews, faith speaks to confidence in what we hope for and assurance about what we do not see. Certainty is not a bad word in the Bible; see Luke 1:4 or the centurion’s testimony in Luke 23:47.

I realize this analogy breaks down because Christian doctrine is more than simply facts and figures. We cannot reduce Christian truth claims to merely systematic affirmations or mathematical formulations. But even when considering the personal nature of knowing Jesus as the Truth, we shouldn’t resist certainty. What we need is not the kind of scientific certainty elevated by the Enlightenment, but a personal certainty, the kind of certainty that rests assured in God’s demonstration of love for me through sending Christ to die for me, a sinner. And that kind of certainty should keep us from asserting our doctrinal confidence in a way that seems like we’re just scoring points in intellectual debate or dressing down our theological interlocutors.

The Christian faith is full of mystery and paradox, but much of this mystery has been divinely revealed. Certainty, then, should not be set in opposition to humility. We recognize that our understanding of truth (while not comprehensive in the idolatrous, autonomous sense) is based not on our own intelligence or study, but on the grace of God. What we need is not less certainty, but more dependence on the God who has revealed his truth to us. We really know the truth, and we always know it only in part. That’s another surprising paradox.

How To Find Joy Amid Tensions With Other Believers

The Danger of Students Taking a “Gap Year” from Church

Scotty Smith
Never an Abba-less Day
Much More Than UNC Versus Duke
100 Healing Words for Every Harmful Syllable
Thabiti Anyabwile
A Burden Removed: A Biblical Path for Removing the Racism of Our Forefathers
Missions and Justice
Reparations Are Biblical
Erik Raymond
How to Start a Pastoral Network
Are Masks a Conscience Issue?
Quiet Subversion After a Chaotic Election
Ray Ortlund
Something profound in our generation
Turning to God in great affliction
Who can fight the Lord’s battles?
LOAD MORE
Loading