In our previous posts, we attempted to define “manhood” according to a man’s relationship with God (worship), creation (work), and society (esp. women).  I argued that a true man worships God, works for the glory of God, and normally marries a woman to the glory of God.

Along the way, there were some really good comments, observations and questions that expanded the discussion.  That’s good because as I’ve noted I’m really too young to attempt writing anything definitive.  You don’t need to learn about manhood from me, but from someone 20 years my senior who has passed through life stages still ahead of me, worked through problems I’m still thinking about, and seen enough changes in the world to know when to worry and when to keep grinding. But, I’m willing to talk out loud and to invite others to join the chorus.

One good question raised was, “What about single men (and women)?”  How does all this talk of men and women applied to the unmarried?  That’s a really good question, and one that I care a lot about.  So, let me attempt some comments as a skeleton of my thinking.

Before I sketch some thoughts, if you’re interested in thinking more about singleness, you might hunt down a couple resources:

* I hear great things about Barry Danylak’s Redeeming Singleness.  I haven’t read it, but I trust the opinion of the mature, life-long single folks who have.  You might give that a try.

* I don’t really hear good things about my talks on singleness at Covenant College a couple years back.  If you can find the audio, you’ll hear some similar summary comments as those that I’ll make below.

What about single men?  Are they real men?

Here’s the vision: Singleness is a gift from God with the best advantage for fully enjoying God.  Your singleness is for your deep satisfaction and joy in Jesus.  I think this is partly what Jesus means when He says that some are “eunuchs” (remain unmarried) for the kingdom of heaven’s sake (Matt. 19:12).  Jesus quickly adds that not everyone can receive this teaching, only those to whom it has been given.  In other words, there seems to be a work of grace that enables a man or woman to refrain from the typical course of marriage and live a life totally devoted to the kingdom of God.  It’s possible to be a “real man” and remain single.  I think 1 Cor. 7 sketches a glorious vision of this life by teaching seven key truths.  I’ve added a few basic questions for folks to ask themselves.

Singleness is a gift of God (v. 7).  It’s a grace gift.  It’s not a punishment.  It’s not an incompleteness.  Singleness is not a curse.  It’s a blessing.  It is given by God to some men and women.  Do you think of singleness as a gift?  Sadly, many don’t.

Singleness is a good life (v. 8).  By “good,” the Bible means pleasing to God.  Pleasant.  Admirable.  Godly singleness gives God joy.  I can’t help but read verse 8’s pronouncement of the goodness of singleness and think of God’s pronouncements at the creation, where each act of creation receives the approval of God in the words “God saw that it was good.”  Some might be tempted to think of 1 Cor. 7:8 as a contradiction to Gen. 2:18.  But if we keep in mind the historical uniqueness of Genesis 2:18–there was literally no other human being with whom Adam could socialize or work–then we avoid apparent contradiction.  Today, the earth is filled with men and women just as God intended.  Man is not alone.  Some gifted with singleness–either for a season or for life–may pursue the good life singleness offers. Do you agree with God that your singleness is “good”?

If singleness is a gift from God and a good life, then singleness is something to be desired and not just endured.  That’s why Paul says in verse 7, “I wish all men were as I am.”  Notice in verse 8 he says this is true for “the unmarried (never married) and the widows.”  The fact that the Bible says singleness is good for widows–people once married but single again because of death–shows the extraordinarily high value placed on singleness.  We presume that the blessings of marriage are so great that a person wouldn’t want go back to singleness in widowhood.  But that’s not Paul’s perspective here.  Even if you’ve once known marriage and now you aren’t, the Bible calls you to consider and desire a life of singleness before the Lord.

Between verses 17-27, three times Paul gives this principle: Remain in the situation you were in when God called you to salvation.  We see that in verse 17, 20, and 24.  He says in verse 17 that “This is the rule I lay down in all the churches.”  How can he say that about unmarried people unless being unmarried is good and desirable?  I know many who seem to be enduring their singleness rather than enjoying it.  Those desiring marriage can face great pressure, temptation, and dissatisfaction.  I don’t want to make light of that.  But amidst the struggle of singleness, some may come to reject the goodness afforded them.  They run the risk of effectively saying, “God, you messed up with my life.”  I trust we all see the danger of such thinking and feeling.

Singleness spares the person from marital troubles (v. 28).  When you look around at happily married couples realize you’re also looking at people with problems.  Paul says“they face many troubles.”  Say “hello” to Mr. and Mrs. Many Problems.  My single friend, God is sparing you many troubles.  Sometimes the blessings of God are measured not by what we receive from God but by what God spares us from.  Have you read the news concerning the variety and intensity of marital problems in the land?  Abuse.  Neglect.  Loneliness while married.  Divorce.  Adultery.  Abandonment.  I could go on.  This text says that in your singleness God spares you many troubles.  Watch out for a heart that says, “I’d rather have the trouble.”  You have no idea. Better to commit your heart to enjoying God’s good gift of singleness for as long as He blesses you with it.

Singleness means living for eternity rather than this world (vv. 29-31).  Because “the time is short” and “this world in its present form is passing away,” those who know Christ should live for eternal things.  The single man can more effectively store up for himself treasures in heaven, not on earth.  Which enables the next benefit of singleness….

Singleness frees the unmarried from divided devotion (vv. 32-35).  Married couples care for the things of the Lord and the things of their spouse.  The single man may be exclusively “concerned about the Lord’s affairs—how he or she can please the Lord.”  They may dedicate themselves to “living in a right way in undivided devotion to the Lord” (v. 35).

Singleness makes the single person happier than marriage does (vv. 39-40).  Notice that Paul says this as one who has the Spirit of God inspiring and directing him as he writes this.  I suspect the apostle needed to add that extra defense of his thought because so many would instinctively reject this notion.  Everything in our culture teaches us that we’re happier in marriage not singleness.  Even folks who’ve had bad marriage experiences continue to hope that subsequent nuptials will yield the sought-after bliss.  There’s even the phrase “wedding bliss.”  We never speak of “singleness bliss.”  I mean, even ignorance can be bliss.  But rarely do we think of the unmarried person as living in a higher state of joy.  We need to because the Bible exhorts some to remain married precisely because it will offer them superior happiness and undivided devotion to the Lord. 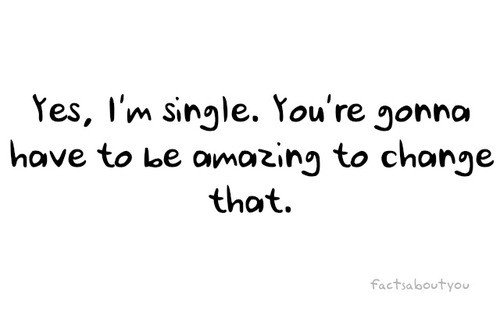 Single Men and the World of Women around Them

Having said all that, I still contend that “manhood” necessitates a certain relatedness to women.  Though single, men have a responsibility for honoring women, honoring marriage, protecting women and families, providing leadership in the church and in many social settings, showing consideration to any female friends and sisters in the church, and even playing surrogate “father” roles with children who have no active father in their lives.  In all these ways and more single guys prove themselves to be men in their social relationship with women, even though they’re not married.

Well, this got longer than I intended.  It’s also too long for anyone who disavows expertise in the area, as I do.  As always, drop your comments and thoughts.  Let’s sharpen iron.