Last night I had a twitter exchange–one of many–with an assertive brother insisting that I was biased in my view of the events in Ferguson and in my assessment of the grand jury process. We pressed each other on various points until we agreed that we could no longer hear one another and should stop for the night. I’m grateful we talked. And I’m grateful we stopped.

The stopping allowed me to process one part of our exchange in particular. My interlocutor at one point mentioned that it is government’s job to bring justice in the case of lawbreaking. I asked if he would give me a definition of “justice,” to which he replied “the virtue which consists in giving everyone his due.” My friend was certain justice had been served in the shooting of Brown if Wilson acted in self-defense. Brown, in that case, had received “his due.”

On the drive to school this morning, the children and I rode mostly in silence as I thought a lot about our exchange. I thought a lot about the iron-clad certainty some people have in judging Brown’s shooting “just.” And I thought a lot about how that certainty is informed not by their knowledge of the events of that morning (my partner was honest enough to admit he wasn’t there and didn’t know) but by the menacing portrait of Brown and his family developed and spread in some quarters. Our conversation began with my friend asking me to comment on this graphic: 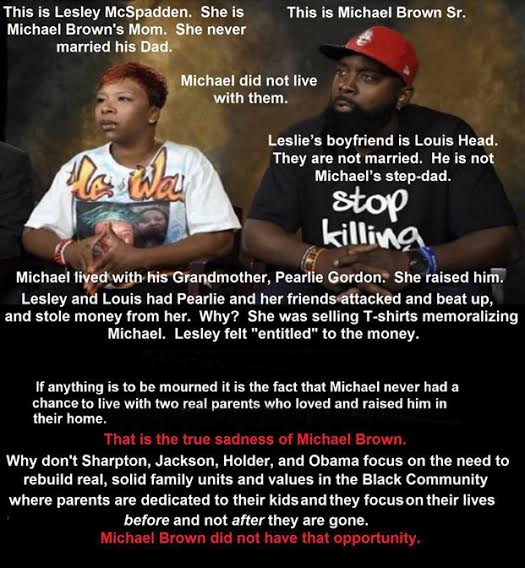 For some people, “justice” depends as much on seeing Brown and family in this light as it does on any true evidence from the scene. We need a boogeyman Brown to assuage our collective conscience about what happened to Brown. And if we can calm the inner voice of righteousness in Brown’s case, then we give ourselves permission to conveniently forget that Michael Brown’s name is one in a long list of unarmed men killed under suspicious circumstances by police officers.

It’s not just “the media,” the major networks and outlets, that put together these portrayals. Everyday citizens and professing Christians do the same. Even law enforcement officers get in on the act. As in this photo posted by Marc Catron, a Kansas City police officer who mistook the Oregon man pictured for Michael Brown: 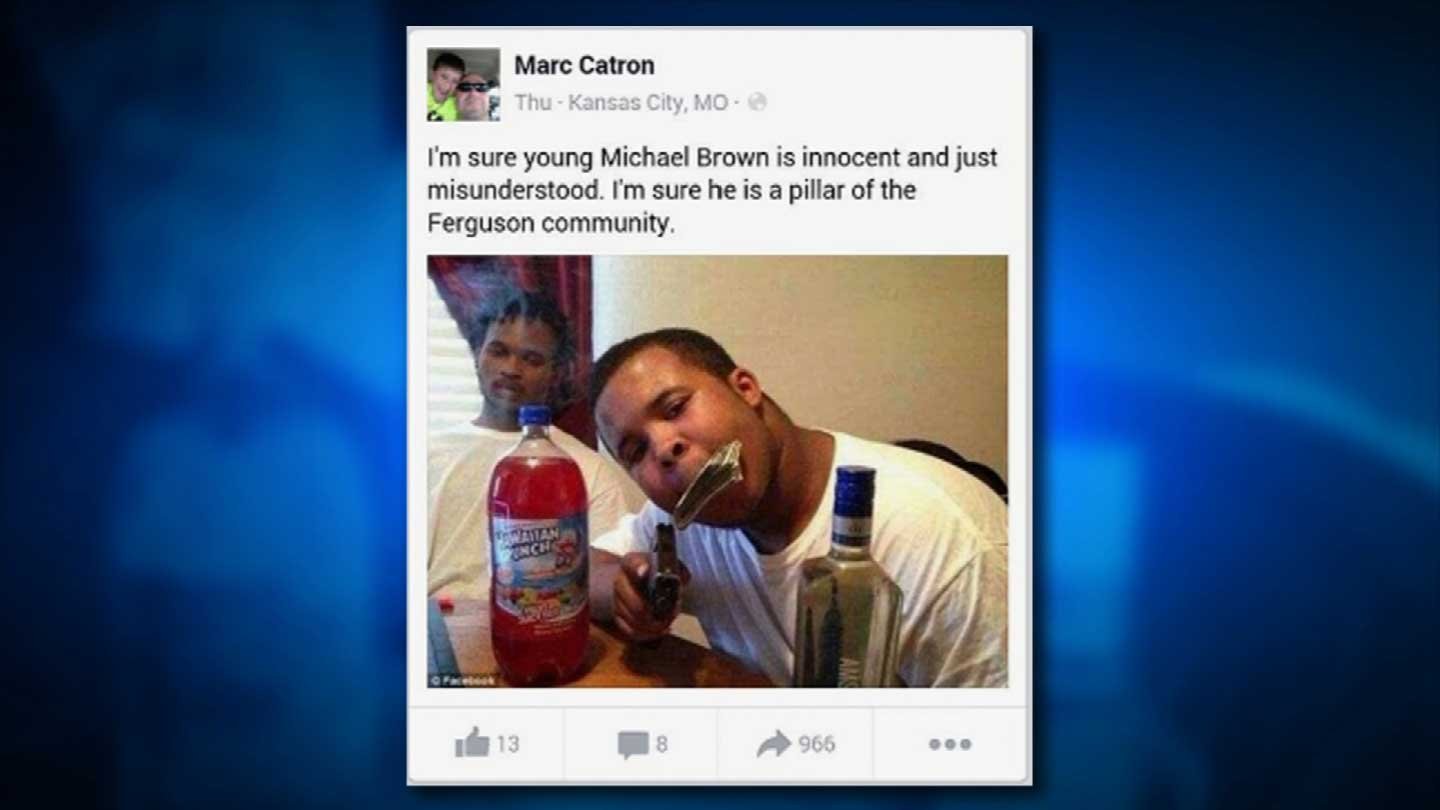 The officer later posted a picture of the O.J. Simpson trial and wrote, “Remember how white people rioted after OJ’s acquittal? Me neither.” Last I read, the Kansas City officer was “under review” for violating the police department’s media policy. One wonders why this isn’t a more troubling and serious infraction.

So here’s why I’m resolved to contribute to this discussion and others like it. What some people think of as “justice” based on these crude portrayals of human beings really represents a nightmare for people who look like me. Before you judge that an over-reaction, let me simply ask that you compare the sentiments in these posters and posts with the bullet points of my own life.

I am Mike Brown in so many ways. Our lives are not that different.

And, like Brown, I’ve had my encounters with the police. Many of them were fine. But they were always tense. Even the way an officer at a high school basketball game would afterward speak with us players, hand sometimes casually resting atop his holstered weapon, felt as if it could go terribly wrong in a second. I never mouthed off at an officer that I recall. But I wanted to–especially when I knew I was being unfairly treated, when I felt my dignity was being trampled and my humanity swallowed each time I had to reply, “Yes, sir” or “No, sir.” Like the time campus police shoved me in the back of a patrol car so a female student–hidden from my view–could take a look at me as the possible suspect that assaulted her. It didn’t matter that there were twenty university faculty who could testify that I’d just spent the last hour playing basketball in the gym with them. My life could have been very different at any point during any encounter with officers.

And here’s the kicker: The headlines would have focused on the bullet points above. They would likely have covered my “checkered past” and family life while leaving out my grades. The benefit of the doubt likely would have been given to the officers while I was vilified. And far too many people would have concluded based on the media profile that “justice” had been served. They would have repeated the notions as easily as greetings pass between friends. They would say, “I got my due.”

President Obama was not wrong nor wrong to say that he could have been Trayvon Martin. As hard as it was for some people to hear it, a lot of us simply thought, “Absolutely.” I could have been Mike Brown. And so could all of my nephews: Kendrick a.k.a. “Duke,” Derrick a.k.a. “Scooter,” Parris a.k.a. “Fat Daddy,” and Robert a.k.a. “P.J.” Their nicknames, given to them as toddlers, would have been enough for some to speculate gang involvement and to twist into partial “justification” for whatever treatment they received.

I’ve tried in conversation to figure out why the situation with Brown and Ferguson has erupted into a national debate and not some other situation with a “cleaner” victim and “dirtier” officer. I don’t know why God in His providence chose this situation. But perhaps it’s to expose to us–if we’re willing to see–the prejudices and biases we harbor and pass around without thinking. Perhaps it’s the messier situations that bring to surface the deeper matters of the heart.

So I think to myself, It could have been me. It could be my son one day. Do I want a future where such things continue to happen?

As I listen to the debate and consider Wilson’s testimony about what he was thinking during his conflict with Brown, the one thing I don’t hear from many of those who think justice was served is “Michael Brown was made in the image of God.” As I listen to protestors calling for justice, I don’t hear many of them reminding themselves that Darren Wilson is made in the image of God, too. I don’t hear those persons lamenting the potential always there for a person to be different than portrayed or better than he was. I don’t hear many of those persons decrying that this  lost potential gets multiplied through an entire community, and for that community the death of Michael Brown is the death of a better life hoped for, a God-given potential tragically unrealized.

And I wonder, at what point might realizing Brown bore the image of God have made the difference between life and death. How far back in the encounter might another outcome have been possible with this single piece of understanding? Was it when Brown turned to face Wilson 150 feet away from the cruiser? Was it when Brown fled the cruiser with one sandal? Was it when Wilson exited his car and began a pursuit? Would it have made a difference when Wilson reversed the cruiser to confront Brown, or when he first spoke to the young men about walking in the street?

If at the beginning of their encounter Wilson saw Brown as one made in the image of God would Brown be here and would Wilson still be an officer, neither man harmed in any way that day? I don’t know. It could have all gone terribly wrong because Brown didn’t think Wilson was made in God’s image. I don’t know.

But I do know this nightmare usually features the demonizing of persons rather than celebrating the fact that they’re image bearers. And I know that when society does that it’s not justice for the demonized; it’s a nightmare.

Scotty Smith
Don’t Settle for Similes, Analogies, and Metaphors
Can We Handle THIS Much Freedom?
“Yet” and “Nevertheless”
Trevin Wax
Some Personal Announcements Before Signing Off
5 Quick Takes for New Culture Wars
Truthful Witness in the Public Square
Erik Raymond
He Is Not Ashamed
How to Get More Out of Church
Recent Reads: April & May
Ray Ortlund
Psalm 1, a reverse translation
Happy beyond description
Why I Got out of Twitter
LOAD MORE
Loading