And they devoted themselves to the apostles’ teaching and fellowship, to the breaking of bread and the prayers. And awe came upon every soul, and many wonders and signs were being done through the apostles. And all who believed were together and had all things in common. And they were selling their possessions and belongings and distributing the proceeds to all, as any had need. And day by day, attending the temple together and breaking bread in their homes, they received their food with glad and generous hearts, praising God and having favor will all the people. And the Lord added to their number day by day those who were being saved.

This passage in the early history of the church tends to stun us with the obvious and powerful supernatural acts of God on display. There were “many wonders and signs” and “the Lord added to their number day by day those who were being saved.” It’s as though our eyes tunnel in on these extraordinary aspects of that huddled mass of early Christianity.

On the other hand, though, the passage is remarkably ordinary. The early church’s “program” was really quite simple, devotion to: 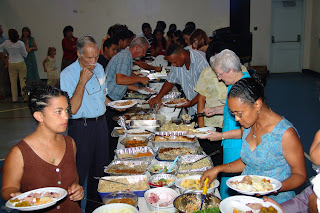 It’s actually a pretty mere list. No vacation Bible school. No organized men’s or women’s fellowships. No alternative services for differing musical preferences. No special auxiliaries of the church for this or that social or political cause (and surely there were plenty to be involved in in 1st century Rome and Jerusalem). Nothing mentioned about youth group or youth church. It’s a pretty plain paper bag approach: teaching, fellowship, communion, and prayer.

And yet, see how the Lord used these basic floorboards in the lives of people. “And awe came upon every soul.” “All who believed were together and had every thing in common.” Gladness, generosity, praise and thanksgiving to God, and “favor with all the people.” All of this from the simple and unadorned life together of the church, a life that stressed the apostles’ teaching, fellowship, breaking bread, and prayer.

In today’s church, the life of a local congregation is often built on so many things other than these simple things. Church’s are organized as “family centers,” cater to Gen-Xers, offer special services and programs for nearly every thing that ails a community, runs from special program to special program, and even dabbles in economic development and political initiatives. Meanwhile, almost no one is left in awe any more. Church disunity is fairly commonplace. You can almost forget about selling possessions and giving to the poor, else people go away sad like the rich young ruler or label you a cult. The church has anything but favor with all the people.

She’s despised and ridiculed and blamed for everything. We’re quick to conclude that such accusations are a form of persecution or hatred of God and His church. And to some extent that’s certainly true. But how many of us have draw any connection between the customarily low and skeptical view of the church and the supplanting of a mere life together emphasizing doctrine, fellowship, prayer, and breaking bread? In other words, could it be that there is no awe and no favor because we’ve abandoned the simple corporate life outlined in Acts 2?

Prayer meetings are almost empty in most churches. People tire of doctrine and theology; they want something “practical” they tell us. Hospitality and fellowship are a lost discipline in many quarters; privacy and anonymity are vaulted values. For some, communion is an “add on” to the service, a ritual often not understood or esteemed even by many in the ministry.

And I wonder if this state of affairs, where it exists, is not the result of thinking low and infrequent thoughts about the apostles’ teaching, fellowship, breaking bread, and prayer. The early church did these things “day by day,” in the temple and in their homes. This is what “devotion” looked like: constancy combined with eagerness and joy.

Perhaps one of the most destructive things that can happen to individual Christians and entire congregations is to develop a programmatic mentality toward church life. Where churches commit themselves to a view of the Christian life that emphasizes canned and special programs, the mereness of simply knowing and living with one another can be deeply undermined as people live from event to event, special high to special high. Over time, the church is seen as “boring” if there is “nothing going on” and people begin to mark their lives by this or that event rather than by discerning the Spirit’s work in producing fruit that remains. Awe is replaced with or misdefined as excitement. Genuine togetherness may be lost as the basis for unity becomes a good program rather than the truth of the apostles’ teaching. And along wiht the program mentality oftem comes its twin, the success syndrome where a “good program” and therefore a “good church” is defined by numbers and customer satisfaction. It’s a subtle state of affairs but it’s powerfully destructive.

The old simple approach is still best. We still need a mere focus on the apostles’ teaching, fellowship, breaking bread, and prayer. What Christian thinking biblically could ever define this as boring or insufficient? What Christian who has ever benefitted from the power of God’s word, the intimacy of fellowship, the grace of breaking bread, and the delight of prayer would really want to exchange all of that for the newest denominational initiative and publication? Deep, refreshing, joyful, lasting, awe-inspiring, favor-inducing, thankful and ultimately evangelistically powerful corporate living is actually quite mere. What we need is devotion to it, a back to basics, Word-trusting approach.

Kevin DeYoung
A New (Old) Blog
Life and Books and Everything: American History and the Historian’s Task with Wilfred McClay
Life and Books and Everything: What’s Going Right in the Church?
Trevin Wax
5 Quick Takes for New Culture Wars
Truthful Witness in the Public Square
Encouragement and Caution for Culture Warriors
Ray Ortlund
Psalm 1, a reverse translation
Happy beyond description
Why I Got out of Twitter
Justin Taylor
Chuck Colson: A Life Redeemed
What Mother Teresa Told the Supreme Court: “Your Decision in Roe v. Wade Has Deformed a Great Nation”
How Are We Doing on This, Evangelicals?
LOAD MORE
Loading